The Redstart or Common Redstart (Phoenicurus phoenicurus) is a small passerine bird that was formerly classed as a member of the Thrush family (Turdidae), but is now more generally considered to be an Old World flycatcher (Muscicapidae).

It is a summer visitor in Europe. Its winter quarters are in north Africa. The Redstart is common in Great Britain but in Ireland it is very local.

The male Redstarts first arrive early in April, often a few days in advance of the females. It is a bird of the woodlands and open park land, especially where the timber is old enough to supply cracks and crannies suitable for its nest.

Five or six light blue eggs are laid during May, and a second brood is rare. 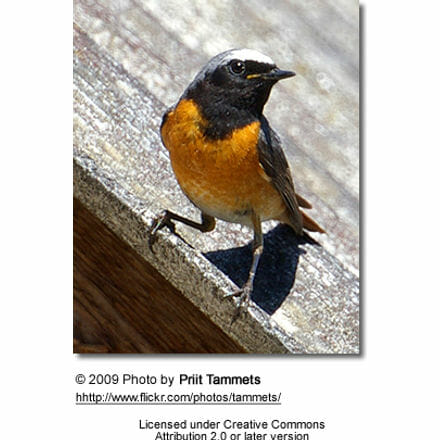 In many of its habits and actions the Redstart shows an affinity to the European Robin. It has the same general carriage, and chat-like behaviour, and is the same size at 14 cm (5.4 in) length.

The rich chestnut tail, from which it and other redstarts gets their names (“start” is an old word for ”tail”), is always in motion. Only the Black Redstart (Phoenicurus ochrurus) has a similar tail.

The male in summer has a slate-grey head and upperparts, except the rump and tail, which, like the flanks, underwing coverts and axillaries (feathers under the wing – the “armpit” or “wingpit” of a bird) are orange-chestnut.

The forehead and supercilium (line above eye) are white; the sides of the face and throat are black. The wings and the two central tail feathers are brown.

The orange on the flanks shades to almost white on the belly. The bill and legs are black. In autumn, broad margins obscure the colours of the male, giving a washed-out appearance.

The female is browner, with paler underparts; she lacks the black and slate, and her throat is whitish.

The male’s song is similar to that of the Robin, but never more than a prelude, since it has an unfinished, feeble ending.

The call is chat-like and the alarm a plaintive single note, wheet, like that of the Wren. 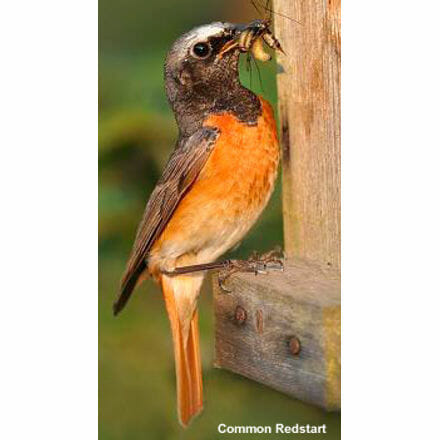 The Redstart feeds like a flycatcher, making aerial sallies after passing insects, and most of its food consists of winged insects.