The European Shag or Common Shag (Phalacrocorax aristotelis) is a species of cormorant. It breeds around the rocky coasts of western and southern Europe, southwest Asia and north Africa, mainly wintering in its breeding range except for northernmost birds.

In Britain this seabird is usually referred to as simply the Shag.

This is a medium-large black bird, 68-78 cm long and with a 95-110 cm wingspan. It has a longish tail and yellow throat-patch. Adults have a small crest in the breeding season.

It is distinguished from the Great Cormorant by its smaller size, lighter build, thinner bill, and, in breeding adults, by the crest and metallic green-tinged sheen on the feathers.

Among those differences are that a shag has a lighter, narrower beak; and the juvenile shag has darker underparts. The European Shag’s tail has 12 feathers; the Great Cormorant, 14 feathers.

The green sheen on the feathers results in the alternative name “Green Cormorant” sometimes being given to the European Shag.

It feeds in the sea, and, unlike the Great Cormorant, is rare inland. It will winter along any coast that is well-supplied with fish.

The European Shag is one of the deepest divers among the cormorant family. Using depth gauges, European Shags have been shown to dive to at least 45 metres. European Shags are preponderantly benthic feeders, i.e. they find their prey on the sea bottom. They will eat a wide range of fish but their commonest prey is the sand eel. Shags will travel many kilometres from their roosting sites in order to feed.

In UK coastal waters, dive times are typically around 20-45 seconds, with a recovery time of around 15 seconds between dives; this is consistent with aerobic diving, i.e. the bird depends on the oxygen in its lungs and dissolved in its bloodstream during the dive. When they dive, they jump out of the water first to give extra impetus to the dive. 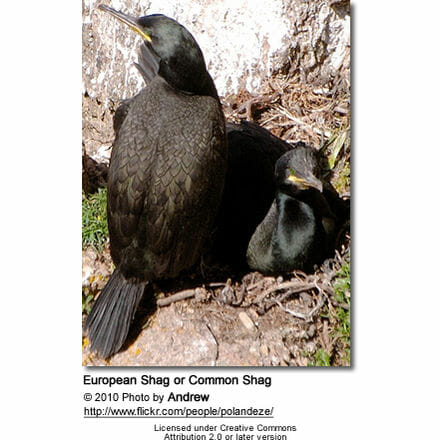 It breeds on coasts, nesting on rocky ledges or in crevices or small caves. The nests are untidy heaps of rotting seaweed or twigs cemented together by the bird’s own guano. The nesting season is long, beginning in late February but some nests not starting until May or even later.

Three eggs are laid. Their chicks hatch without down and so they rely totally on their parents for warmth, often for a period of two months before they can fly. Fledging may occur at any time from early June to late August, exceptionally to mid October.

The subspecies differ slightly in bill size and the breast and leg colour of young birds. Recent evidence suggests that birds on the Atlantic coast of southwest Europe are distinct from all three, and may be an as-yet undescribed subspecies (Yésou et al., Brit. Birds 98: 369-370, 2005). 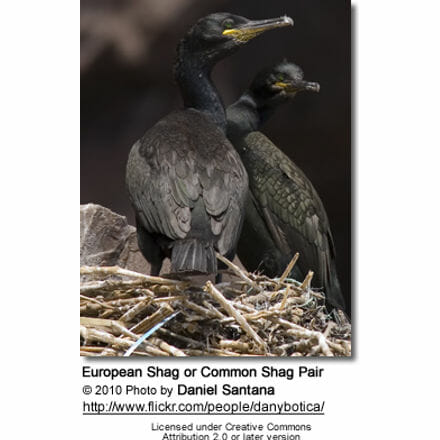 The name shag is also used in the Southern Hemisphere for several additional species of cormorants.

The European Shag can be readily be seen at the following breeding locations in the season (late April to mid July): Farne Islands, England; Fowlsheugh, Scotland; Runde, Norway; Faroe Islands and Galicia.

The largest colony of European Shags is in the Cies Islands, with 2,500 pairs (25% of the world’s population).