The Common Teal or Eurasian Teal (Anas crecca) is a common and widespread duck which breeds in temperate Eurasia and migrates south in winter.

It is the Old World counterpart of the North American Green-winged Teal ( A. carolinensis), which was formerly (and sometimes is still) considered a subspecies of A. crecca.

The Common Teal often simply called “the teal” due to being the only one of these small dabbling ducks in much of its range.

The maximum recorded lifespan – though it is not clear whether this refers to the Common or the Green-winged Teal – was over 27 years, which is rather high for such a small bird.

From a distance, the drakes in nuptial (breeding) plumage appear grey, with a dark head, a yellowish behind, and a white stripe running along the flanks.

Their head and upper neck is chestnut, with a wide and iridescent dark green patch of half-moon- or teardrop-shape that starts immediately before the eye and arcs to the upper hindneck. The patch is bordered with thin yellowsh-white lines, and a single line of that colour extends from the patch’s forward end, curving along the base of the bill.

The breast is buff with small round brown spots. The center of the belly is white, and the rest of the body plumage is mostly white with thin and dense blackish vermiculations (= a pattern of fine, wavy, worm-like lines or streaks of color), appearing medium grey even at a short distance. The outer scapular feathers are white, with a black border to the outer vanes, and form the white side-stripe when the bird is in resting position.

The primary remiges (flight feathers – typically only visible in flight) are dark greyish brown; the speculum feathers (= distinctive wing patch) are iridescent blackish-green with white tips, and form the speculum together with the yellowish-white tips of the larger upperwing coverts (which are otherwise grey). The underwing is whitish, with grey remiges, dense dark spotting on the inner coverts and a dark leading edge.

The tail and tail coverts are black, with a bright yellowish-buff triangular patch in the center of the coverts at each side.

In non-breeding (eclipse) plumage, the drake looks more like the hen; it is more uniform in colour, with a dark head and vestigial facial markings.

The hen itself is yellowish-brown, somewhat darker on wings and back. It has a dark greyish-brown upper head, hindneck, eyestripe and feather pattern.

The pattern is dense short streaks on the head and neck, and scaly spots on the rest of the body; overall they look much like a tiny Mallard (A. platyrhynchos) hen when at rest.

The wings are colored similar to the drake’s, but with brown instead of grey upperwing coverts that have less wide tips, and wider tips of the speculum feathers. The hen’s rectrices (= the long flight feathers of the tail) have yellowish-white tips; the midbelly is whitish with some dark streaking.

Immatures are colored much like hens, but have a stronger pattern. The downy young are colored like in other dabbling ducks: brown above and yellow below, with a yellow supercilium (line above each eye). They are recognizable by their tiny size however, weighing just 15 grams (about half an ounce) at hatching.

The drake’s bill is dark grey, in eclipse plumage often with some light greenish or brownish hue at the base. The bill of hens and immatures is pinkish or yellowish at the base, becoming dark grey towards the tip; the grey expands basewards as the birds age. The feet are dark grey in males and greyish olive or greyish-brown in females and immatures. The iris is always brown.

Similar Species ID: Males in nuptial (breeding) plumage are distinguished from Green-winged Teals by the horizontal white scapular stripe, the lack of a vertical white bar at the breast sides, and the quite conspicuous light outlines of the face patch, which are indistinct in the Green-winged Teal drake. Males in eclipse plumage, females and immatures are best recognized by their small size, calls, and the speculum; they are hard to tell apart from the Green-winged Teal however. 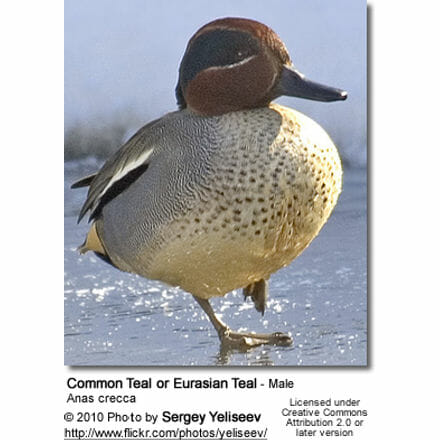 This is a noisy species. The male whistles cryc or creelycc, not loud but very clear and far-carrying. The female has a feeble keh or neeh quack.

The Common Teal breeds across northern Eurasia and mostly winters well south of its breeding range. However, in the milder climate of temperate Europe, the summer and winter ranges overlap.

For example, in the United Kingdom a small summer population breeds, but far greater numbers of Siberian birds arrive in winter.

In the Caucasus region, western Asia Minor, along the northern shores of the Black Sea, and even on the south coast of Iceland and on the Vestmannaeyjar, the species can be encountered all year, too.

In winter, there are high densities around the Mediterranean – including the entire Iberian Peninsula and extending west to Mauretania –, on Japan and Taiwan, as well as in South Asia.

Other important wintering locations include almost the entire length of the Nile Valley, the Near East and Persian Gulf region, the mountain ranges of northern Iran, and South Korea and continental East and Southeast Asia.

More isolated wintering grounds are Lake Victoria, the Senegal River estuary, the swamps of the upper Congo River, the inland and sea deltas of the Niger River, and the central Indus River valley.

Vagrants have been seen in inland Democratic Republic of the Congo (formerly Zaire), Malaysia, on Greenland, and on the Marianas, Palau and Yap in Micronesia; they are regularly recorded on the North American coasts south to California and South Carolina. 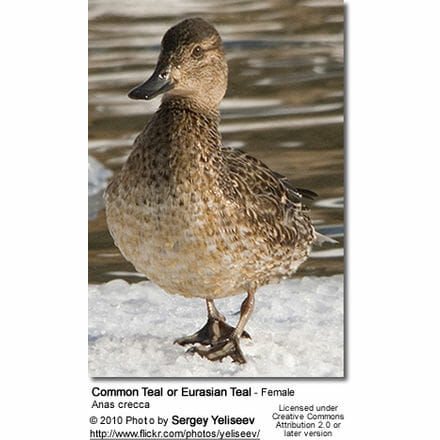 It nests on the ground, near water and under cover.

The pairs form in the winter quarters and arrive on the breeding grounds together, starting about March. The breeding starts some weeks thereafter, not until May in the most northernly locations.

The nest is a deep hollow lined with dry leaves and down feathers, built in dense vegetation near water. After the females have started laying, the males leave them and move away for shorter or longer distances, assembling in flocks on particular lakes where they moult into eclipse plumage; they will usually encounter their offspring only in winter quarters. The clutch may consist of 5-16 eggs, but usually numbers 8-11; they are incubated for 21-23 days.

The young leave the nest soon after hatching and are attended by the mother for about 25-30 days, after which they fledge. The drakes and the hens with young generally move to the winter quarters separately. After the first winter, the young moult into adult plumage.

The Common Teal usually feeds by dabbling, upending (feeding upside down in water) or grazing on land. It may submerge its head and on occasion even dive to reach food.

In the breeding season it eats mainly aquatic invertebrates, such as crustaceans, insects and their larvae, mollusks and worms.

In winter, it shifts to a largely granivorous diet, feeding on seeds of aquatic plants and grasses, including sedges and grains. Diurnal throughout the breeding season, in winter they are often crepuscular (twilight / dusk) or even nocturnal (night) feeders.

This dabbling duck is highly gregarious outside of the breeding season and will form large flocks. In flight, the fast, twisting flocks resemble waders; despite its short legs, it is also rather nimble on the ground by ducks’ standards.

In the breeding season, it is a common inhabitant of sheltered freshwater wetlands with some tall vegetation, such as taiga bogs or small lakes and ponds with extensive reedbeds.

In winter, it is often seen in brackish waters and even in sheltered inlets and lagoons along the seashore.

It appears to be holding its own currently, with its slow decline of maybe 1-2% annually in the 1990s – presumably mainly due to drainage and pollution of wetlands – not warranting action other than continuing to monitor the population and possibly providing better protection for habitat on the wintering grounds. The IUCN and BirdLife International classify the Common Teal as a Species of Least Concern, unchanged from their assessment before the split of the more numerous A. carolinensis.

The Common Teal is one of the species to which the Agreement on the Conservation of African-Eurasian Migratory Waterbirds (AEWA) applies.

The Common Teal belongs to the “true” teals, a group of small Anas dabbling ducks closely related to the Mallard (A. platyrhynchos) and its relatives; that latter group in fact seems to have evolved from a true teal. It forms a superspecies with the Green-winged Teal and the Speckled Teal (A. flavirostris). A proposed subspecies, A. c. nimia of the Aleutian Islands, differs only in slightly larger size; it is probably not distinct.

Whether the Common and Green-winged teals are to be treated as one or two species is still being reviewed by the AOU, while the IUCN and BirdLife International separate them nowadays. Despite the almost identical and highly apomorphic nuptial (breeding) plumage of their males, which continues to puzzle scientists (see the Green-winged Teal page for a discussion of the species’ phylogeny), they seem well distinct species, as indicated by a wealth of behavioral, morphological and molecular data.

The Common Teal was first scientifically named by Carl Linnaeus in his 1758 edition of Systema naturae. His Latin description reads: [Anas] macula alarum viridi, linea alba supra infraque oculos – “a duck with green speculum, a white line above and below the eyes” – and his primary reference was the bird’s description in his earlier work Fauna Svecica.

In fact, the description he used in Systema Naturae was the name under which the bird went in the Fauna Svecica, demonstrating the value of his new binomial nomenclature by compressing the long-winded names formerly used in biological classification into much simpler scientific names like Anas crecca. Linnaeus also noted in his description that earlier authors had already written about the Common Teal at length: Conrad Gessner had described it in the Historiae animalium as the anas parva (“small duck”) among his querquedulae (“teals”); Ulisse Aldrovandi had called it phascade or querquedula minor (“lesser teal”), and was duly referenced by Francis Willughby who named the species querquedula secunda Aldrovandi (“the second teal of Aldrovandus”). John Ray may be credited with formally introducing the name “Common Teal”, while Eleazar Albin called it simply “the teal”. As regards the type locality Linnaeus simply remarked that it inhabits freshwater ecosystems in Europe.

The specific name of Linnaeus is onomatopoetic, referring to the male’s characteristic call which was already discussed by Linnaeus’ sources. Thus, the scientific name of the Common Teal – unchanged since Linnaeus’ time – translates as “duck that makes cryc“; common names like the Bokmål krikkand, Danish krikand and German Krickente mean the same.