The Common Tern (Sterna hirundo) is a seabird of the tern family Sternidae. It is sometimes known as the sea swallow.

This bird has a circumpolar distribution breeding in temperate and sub-Arctic regions of Europe, Asia and east and central North America. It is strongly migratory, wintering in coastal tropical and subtropical regions.

The Common Tern is one of the species to which the Agreement on the Conservation of African-Eurasian Migratory Waterbirds (AEWA) applies.

This medium-sized tern is 34-37 cm long with a 70-80 cm wingspan. It is most readily confused within its range with the similar Arctic Tern (Sterna paradisaea), Roseate Tern (S. dougalli), Antarctic Tern (S. vittata) and South American Tern (S. hirundinacea).

Its thin, sharp bill is red with a dark tip. Its longish legs are also red. Its upperwings show a dark primary wedge, unlike the Arctic Tern, in which they are uniformly grey. Its long tail extends only to the wingtips on the standing bird, unlike Arctic and Roseate Terns, which extend past the wingtips. It is not as pale as the Roseate Tern and has longer wings.

The call is a clear piping, like that of the Arctic Tern, but lower-pitched and less strident.

Common terns are known to reach an age of 23 years or more on occasion (Austin, 1953). The Common Tern is one of the species to which the Agreement on the Conservation of African-Eurasian Migratory Waterbirds (AEWA) applies. The old Scottish word for the Common Tern is pictar, occasionally encountered in Scotland and the Maritime Provinces of Canada. 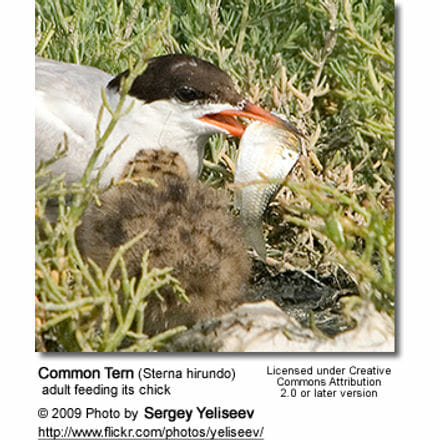 The call is a clear piping, like Arctic Tern but lower pitched and less strident.

This species breeds in colonies on coasts and islands and often inland on suitable freshwater lakes. This latter practice is assisted by the provision of floating “tern rafts” to give a safe breeding area.

It lays two to four eggs. Like many white terns, it is very defensive of its nest and young and will attack humans and other large predators, but unlike the more aggressive Arctic Tern rarely hits the intruder, usually swerving off at the last moment. 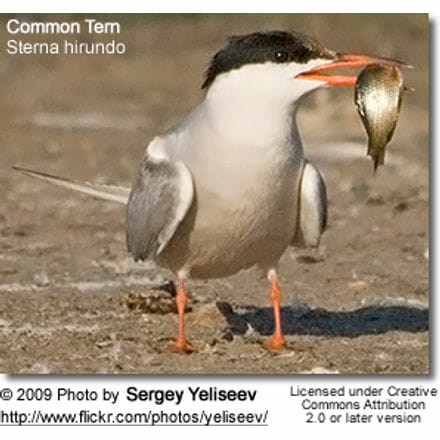 Like all Sterna terns, the Common Tern feeds by plunge-diving for fish, from either the sea or freshwater lakes and large rivers. It usually dives directly, and not from the “stepped-hover” favoured by Arctic Tern.