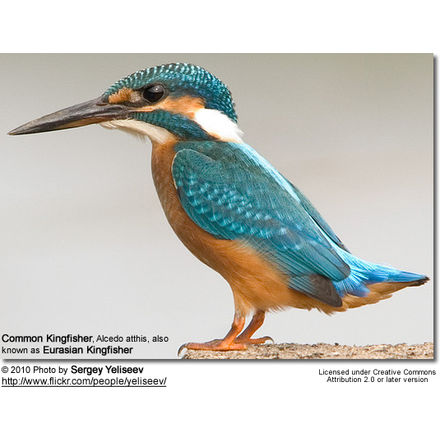 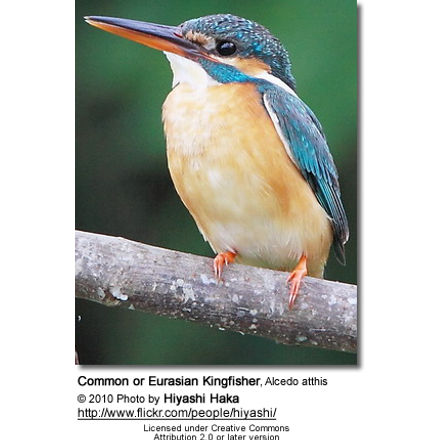 The Common Kingfishers (Alcedo atthis) are known by other names: the European Kingfisher, the Eurasian Kingfisher and the River Kingfisher.

These tiny Kingfishers have seven recognized subspecies. These subspecies claim a wide distribution across Europe, Asia and North Africa. The nominate race – A. a. atthis – is found in Italy. They are also found in the Western Cape of South Africa. In most of its European range, this is the only kingfisher.

They remain primarily in their range, but will migrate to more temperate climates by coastal waters in the winter. Especially when inland waters are icebound, they may move to tidal marshes and the shore. They will seek food sources in estuaries or harbors along rocky seashores.

In areas with warmer temperatures, the Common Kingfishers inhabit clear, slow-flowing streams, rivers, mangrove creeks, swamps and lakes which are surrounded by copious amounts of vegetation. They are often seen perching in tree branches that hang over the shallow water and often hunt from nearby bushes.

The Common Kingfishers prefer to inhabit a temperate climate and will migrate after breeding season to more favorable conditions as cold weather approaches. Kingfishers are nocturnal travelers, with some Siberian species traveling at least 3,000 km (1,900 mi) between their breeding sites and their winter abodes.

They are frequently seen beside lakes, ponds, canals or dykes and streams, foraging for food. 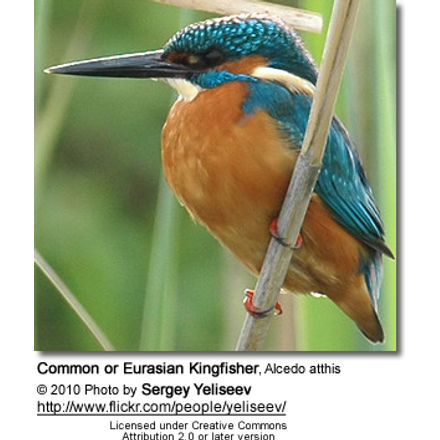 Its features are typical of most Kingfishers: a short tail, large head in profile, and a long, sturdy bill.

The upper parts of the adult bird is mostly bright metallic blue, including the head. The back is cobalt and one can see greenish reflections on the head and wings.

The plumage below is orange. The ear coverts (feathers covering the ears) and under parts are warm chestnut, the chin and sides of neck white.

The bill is blackish and reddish orange at the base. The legs are bright red with a dark blue stripe.

The immature bird have black bills.

The rufus ear patches distinguish it from nearly all of the other subspecies. 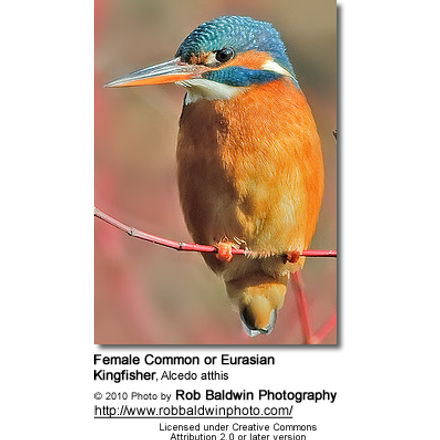 This Kingfisher has regular perches or stands from which it fishes. It sits upright, its tail pointed downwards, suddenly dropping with a splash and usually returning at once with a its prey.

The flight of the Kingfisher is rapid;, the short rounded wings whirring until they appear a mere blur. It is usually seen flying near the water, but during courtship the male chases the female through and over the trees with loud shrill whistles.

The Common Kingfisher will skim close to the water’s surface in search of food. The short, round wings create a whirring sound as it flies, and one can glimpse a flash of shiny blue down its back as he speeds away.

Common Kingfishers are beneficial members of ecosystems since they are expert indicators of freshwater community health. Clear, clean water provides trees and shrubs on banks for perching and following prey; the habitats possessing the highest quality water sources also permit the most favorable visibility and will attract the greatest number of breeding birds.

The presence of the Kingfishers in these habitats confirms the quality of the water. 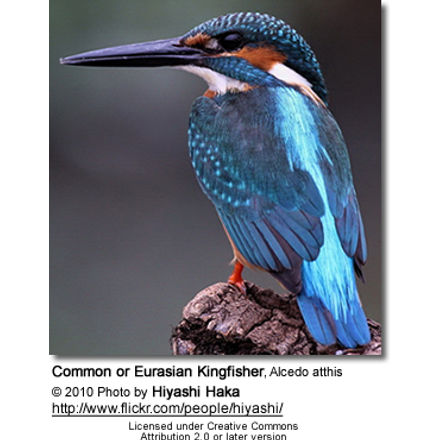 The Common Kingfisher’s flight call is a sharp, brief whistle, sounding like a “chee” and repeated two or three times.

When startled or anxious, it emits a harsh “shrit-it-it.”

From February onward the male has a trilling song, a modulated repetition of many whistles. He also signals with a whistle to the female when he is feeding her, this being his share of the nesting duties. This whistle is produced even when his bill is loaded with food, yet is clear and distinct.

The female will reply and emerge from the nesting hole, and may fly to meet him, take the fish from him in the air, and return to the nest.

The young call the parents in to feed them by making a “churring” sound. 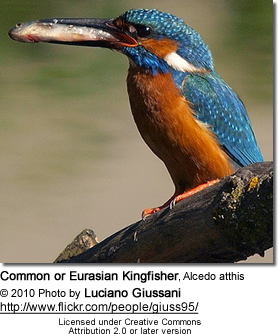 Its diet consists of fish, aquatic insects and crustaceans, including freshwater shrimps.

The Common Kingfisher dives for fish, its main food, and similar to many other species of Kingfisher, it too has developed the visual adaptations necessary to spot its prey under water.

When a Common Kingfisher dives after a meal, it will plunge into the water, creating a V shape with its wings folded backwards, and often it will be completely submerged. It has even been known to dive into a layer of thin ice to capture a fish below the surface!

(View a video of a Pied Kingfisher diving for a fish at .

Large fish are beaten on a bough or rail; small fish and insects are promptly swallowed. A fish is usually lifted and carried by its middle, but its position is changed, sometimes by tossing it into the air, before it is swallowed head downwards. 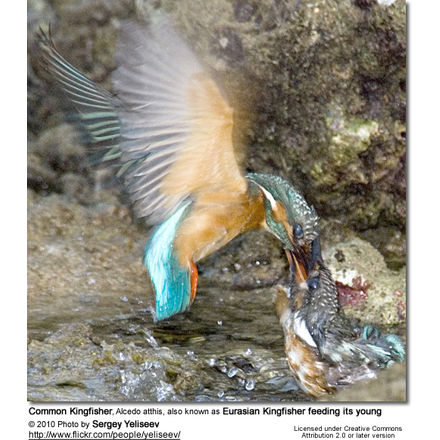 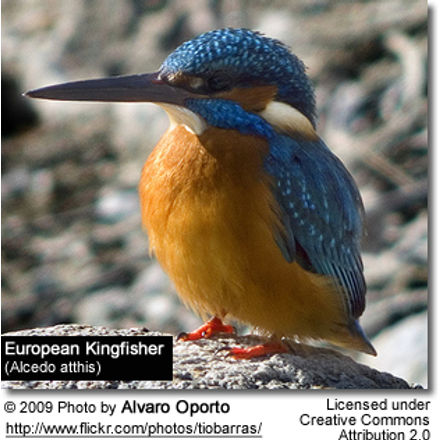 The Common Kingfishers are fierce defenders of their territory, just as are other species of Kingfishers. They must maintain control over their stretch of aquatic territory in order to feed themselves, since they must eat around 60% of their body weight each day. They will battle another Kingfisher if they invade their territories, and each will attempt to hold the other’s beak under water.

Solitary birds, they prefer to roost alone in the cover of prolific vegetation.

Breeding pairs form in the autumn, but each bird retains a separate territory—generally at least 1 km (0.62 mi) long—but it can reach up to 3.5 km (2.2 mi) in length.

The pair will merge their territories in the spring. When the male courts the female, he will begin by calling to her, then pursuing her; later, they will engage in allofeeding, followed closely by copulation.

Both parents burrow out the nesting tunnel along a riverbank, often in hard ground. The straight, slightly inclining tunnel is generally 60–90 cm (24–36 in) long. Both birds excavate, except when an old hole of a Sand Martin or Water Vole is appropriated. Most incline upward for about three feet before the nesting chamber is reached.

The Common Kingfisher typically lays five to seven glossy, white eggs placed on a litter of fish bones and disgorged pellets. Since the parents cannot brood all of the eggs, one or two eggs in most clutches will not hatch. Both parents take turns incubating during the day, but only the female incubates overnight. The eggs hatch in 19–20 days, and the altricial chicks will be cared for by the parents for at least 24–25 days.

The young are at first without down and clothed with numerous small blue feathers. Their bills are steel-blue and their feet lighter colored than adults. When they leave the nest they differ little from their parents, except that the colors are duller, the spot on the neck is buff, and the grey margins to the breast feathers give a mottled appearance.

As they grow, the chicks travel to the burrow’s entrance, where they can be seen begging to be fed.

The parents may raise 2 or 3 broods in a season. The first clutch is usually laid in April, but second broods are often in the nest at the end of July.

Their call is then an insistent, continuous trill. 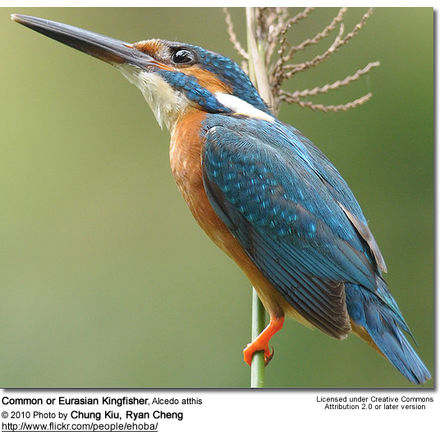