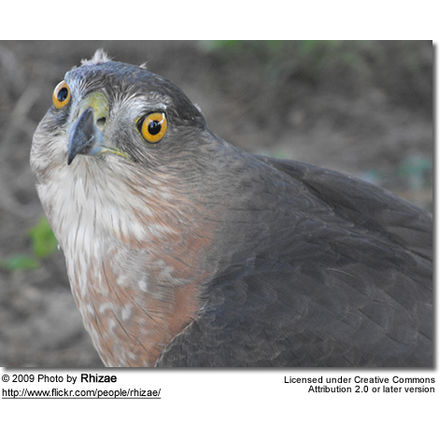 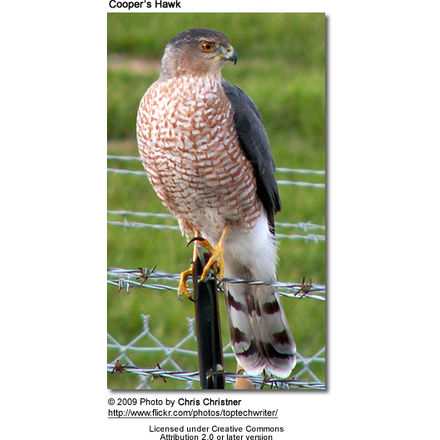 The Cooper’s Hawk (Accipiter cooperii) is a medium-sized hawk native to the North American continent and found from Canada to Mexico.

As in many birds of prey, the male is smaller than the female. The Birds found east of the Mississippi River tend to be larger on average than the birds found to the west.

Cooper’s Hawk was first described by French naturalist Charles Lucien Bonaparte in 1828. It is a member of the goshawk genus Accipiter. This bird was named after the naturalist William Cooper, one of the founders of the New York Lyceum of Natural History (later the New York Academy of Sciences) in New York.

All have short rounded wings and a very long tail with dark bands, round-ended at the tip. Adults have red eyes and have a black cap, with blue-gray upper parts and white underparts with fine, thin, reddish bars. Their tail is blue gray on top and pale underneath, barred with black bands. Immatures have yellow eyes and have a brown cap, with brown upper parts and pale underparts with thin black streaks mostly ending at the belly. Their tail is brown on top and pale underneath, barred with dark bands. 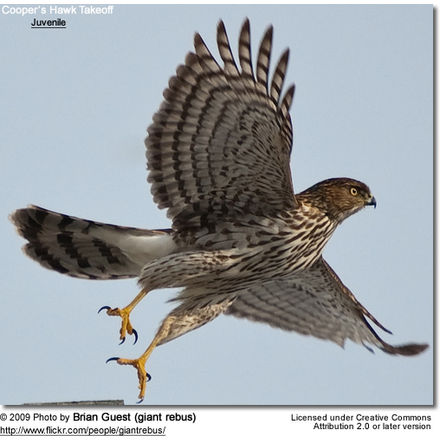 The Cooper’s Hawk appears long-necked in flight and has been described by birdwatchers as looking like a “flying cross”. The Cooper’s Hawk is seen mostly flying with quick, consecutive wing beats and a short glide, though they may also soar. 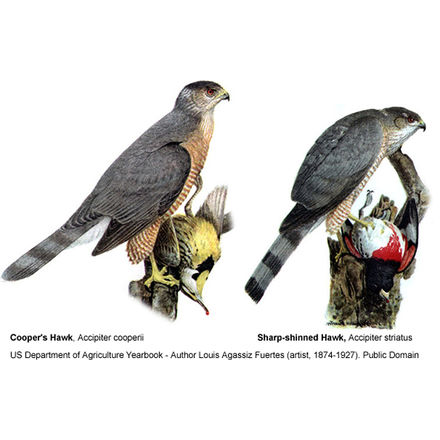 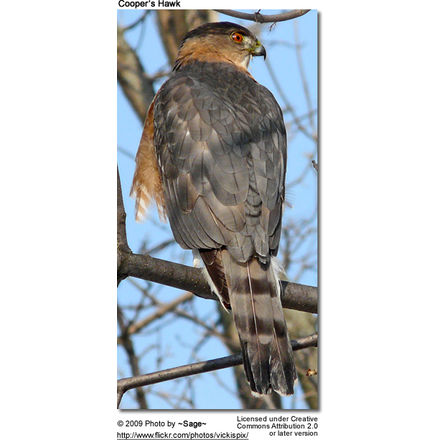 Their breeding range extends from southern Canada to northern Mexico. They are generally distributed more to the South than the other North American Accipiters, the Sharp-shinned Hawk and the Northern Goshawk.

Birds from most of the Canadian and northern-U.S.-range migrate in winter, and some Cooper’s Hawks winter as far south as Panama).

The Cooper’s Hawk prefers to nest in wooded areas adjacent to wide open fields that provide hunting opportunities along their edges.

These birds capture prey from cover or while flying quickly through dense vegetation, relying almost totally on surprise.

Most prey are mid-sized birds, with typical prey including American Robins, jays, woodpeckers, European Starlings, icterids and doves. Birds preyed on can range in size from wood-warblers to Ring-necked Pheasants.

Cooper’s Hawks also eat small mammals, especially rodents such as chipmunks and tree squirrels. Mammalian prey can be as small as mice and as large as hares. Other possibilities are lizards, frogs, snakes and large insects.

The hawks often pluck the feathers off their prey on a post or other perch. They are increasingly seen hunting smaller songbirds in backyards with feeders.

They will perch in trees overlooking the feeders, then swoop down and scatter the other birds in order to capture one in flight. 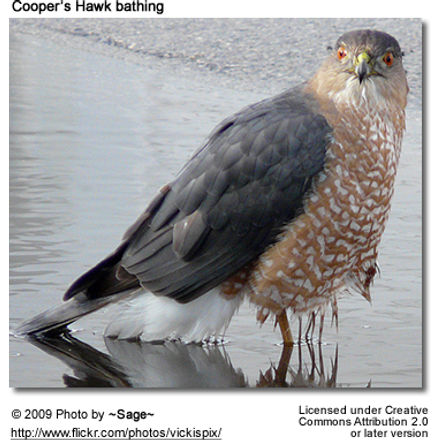 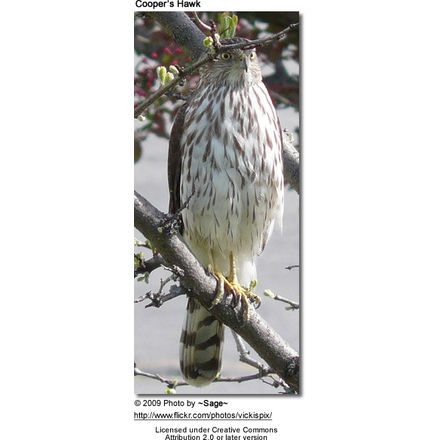 Their breeding habitat are forested areas. The breeding pair builds a stick nest in large trees.

The fledging stage is reached at 25 to 34 days of age, though the offspring will return to the nest to be fed for up to 4 more weeks.

Eggs and nestlings are preyed on, rarely, by raccoons, crows as well as other competing Cooper’s Hawks. Adults rarely fall prey to Red-tailed Hawks, Great Horned Owls and Northern Goshawks.

At one time, Cooper’s Hawks were heavily hunted in persecution for preying on poultry and were called “chicken hawks”. It is now known that predation by these hawks on domestic animals borders on negligible, and they are rarely hunted these days. Cooper’s Hawks’ breeding success was also reduced by the use of the pesticide DDT, but the ban of DDT ended that threat. Since then, the adaptable Cooper’s Hawk has thrived. 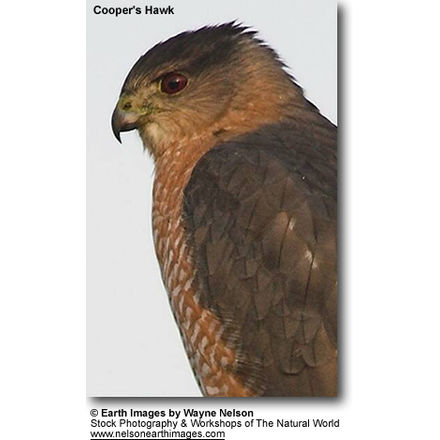 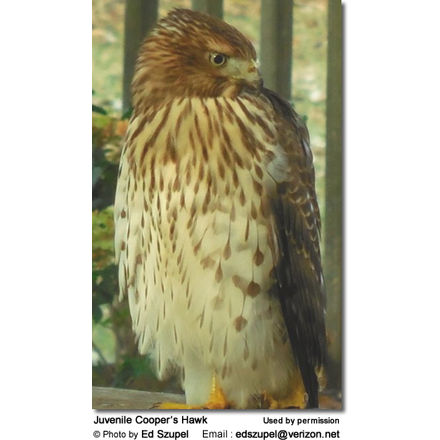 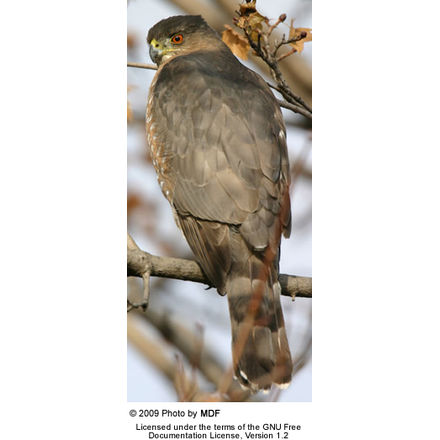 Copyright: Wikipedia. Thisarticle is licensed under the It uses material from … Additional information and photos added by Avianweb.