The Coppersmith Barbet or Crimson-breasted Barbet or Coppersmith (Megalaima haemacephala) is a bird with crimson forehead and throat which is best known for its metronomic call that has been likened to a coppersmith striking metal with a hammer.

Like other barbets, they chisel out a hole inside a tree to build their nest.

They are mainly fruit eating but will take sometimes insects, especially winged termites.

It is a resident found in South Asia and parts of Southeast Asia.

Throughout their wide range they are found in gardens, groves and sparse woodland. Habitats with trees having dead wood suitable for excavation is said to be important. Birds nest and roost in cavities.

In the Palni Hills of southern India it is said to occur below 4000 feet. In the Himalayas it is found mainly in the valleys of the outer Himalayas up to 3000 feet. They are rare in the dry desert zones and the very wet forests.

About nine subspecies are well recognized.

The remaining are island populations in Southeast Asia 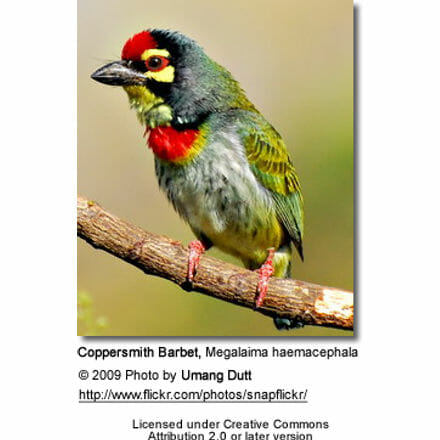 Somewhat larger than a sparrow, it is a relatively small barbet at 17 cm. It is a plump bird, with a short neck and large head. The short, truncated tail is distinctively triangular in flight.

During the nesting season, the wear and tear on the feathers can cause the plumage of the upper back to appear bluish.

The sexes are alike. Juveniles are duller and lack the red patches.

Keeps solitary, pairs, or small groups; larger parties occasionally on abundantly fruiting Ficus trees. Fond of sunning themselves in the morning on bare top branches of tall trees, often flitting about to sit next to each other. The flight is straight, with rapid flaps

Similar Species: This species of barbet is found to overlap in range with several larger barbets in most of South Asia. In the Western Ghats, it partly overlaps with the Malabar Barbet which is of a very similar size but having a more rapid call. The red forehead, yellow eye-ring and throat patch with streaked underside and green upperparts, it is fairly distinctive. Juveniles are duller and lack the red patches. The sexes are alike. The Sri Lankan form has more black on the face, more red on the breast and darker streaks on the underside. 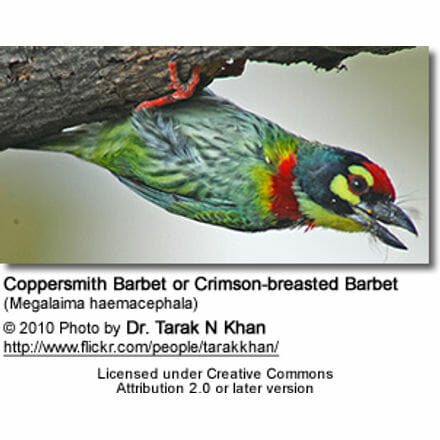 Keeps solitary, pairs, or small groups; larger parties occasionally on abundantly fruiting Ficus trees. Fond of sunning themselves in the morning on bare top branches of tall trees, often flitting about to sit next to each other. The flight is straight, with rapid flaps.

They compete with other cavity nesting birds and frugivores. Megalaima asiatica have been noted to evict them from their nest holes, while Red-vented Bulbuls have been seen to indulge in kleptoparasitism, robbing the male of berries brought to the female at the nest.

The nest holes are also used for roosting and some birds roost alone in cavities and these often roost during part of the day. Immatures will roost with the parents but often return to roost early so as not to be prevented by the parents from entering the roost cavity. 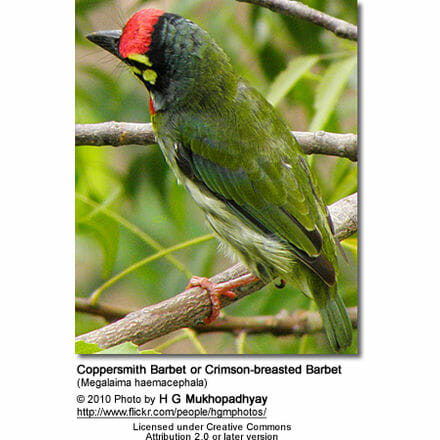 The call is a loud rather metallic tuk…tuk…tuk (or tunk), reminiscent of a copper sheet being beaten, giving the bird its name. Repeated monotonously for long periods, starting with a subdued tuk and building up to an even volume and tempo, the latter varying from 108 to 121 per minute and can continue with as many as 204 notes.

They are silent and do not call in winter.

The beak remains shut during each call – a patch of bare skin on both sides of the throat inflates and collapses with each tuk like a rubber bulb and the head is bobbed.

Prefers Banyan, Peepul, and other wild figs, various drupes and berries, and the occasional insect, caught in aerial sallies. Petals of flowers may also be included in their diet.

They eat nearly 1.5 to nearly 3 times their body weight in berries each day. 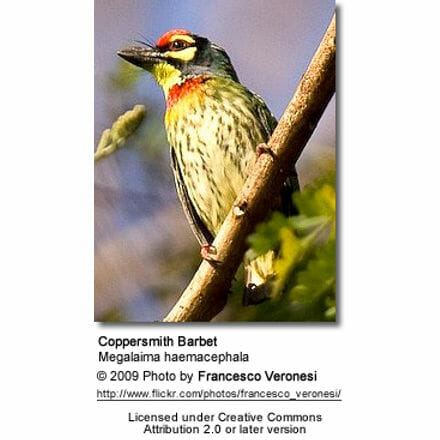 Adult birds are sometimes taken by predatory species. In urban areas, there are records of collisions with structures including white walls. Pesticide poisoning has also been noted.