The Corn Crake (Crex crex), or landrail is a small bird in the family Rallidae. Its breeding habitat is not marshes as with most crakes, but, as the name implies, meadows and arable farmland.

It breeds across Europe and western Asia, migrating to Africa in winter. It is in steep decline across most of its range because modern farming practices mean that nests and birds are destroyed by mowing or harvesting before breeding is finished.

The best place to look for or listen for them in the UK is in the Outer Hebrides of Scotland. In Ireland, the best place to hear the birds is the island of Inishbofin, Galway, off the coast of County Galway.

It has mainly brown, heavily spotted upper parts, a blue-grey head and neck, and reddish streaked flanks. It has a short bill and shows chestnut wings and long dangling legs in flight.

Males and females look alike, but in the immature bird the blue-grey is replaced by buff. The downy chicks are black, as with all rails.

The Corn Crake is very secretive in the breeding season, and heard far more often than it is seen. It is hard to flush,walking away through the vegetation. The song, mainly heard at night and very early morning, is a repetitive, far-carrying crex crex, like two notched sticks being rubbed together.

This bird feeds mainly on insects, as well as seeds, shoots and frogs.

The species’ name used commonly to be spelled as a single word, ‘Corncrake’, but the official English name is Corn Crake, and the trend now is to follow this. Other Scottish names for the bird include Corncraik, Corn Scrack (in Aberdeenshire), Daker, King of the Quail (from observations of individuals often taking off, and flying with flocks of quail), Land Rail, Quailzie, and Weet-my-fit.

Originally called a “Corne Crake” in Scotland, Thomas Bewick introduced this name in his book, “A History of British Birds” (Newcastle upon Tyne, 1797). Most of these names derive from both its habitat and its odd call.

The name ‘Daker’ has been derived from the Old Norse “Ager-hoene”, meaning “Cock of the field”. Scottish Gaelic names include Garra-gart (perhaps from the Gaelic word “garrag”, meaning “to yell”), and Racan-arbhai.

The most common name in Gaelic is Traona. 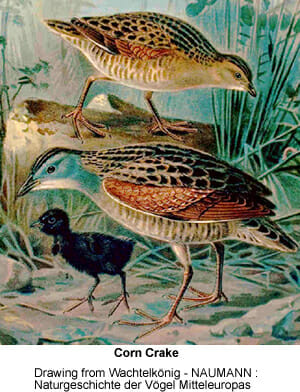