The Cory’s Shearwater (Calonectris diomedea) is a large shearwater in the seabird family Procellariidae. 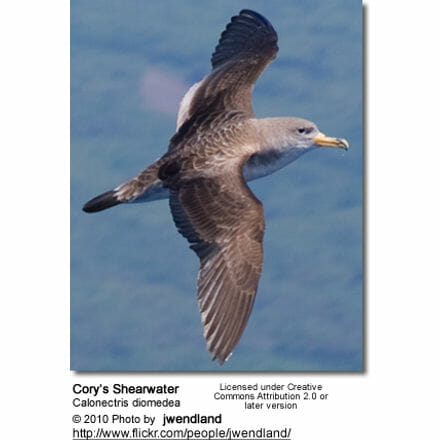 This bird was named after the American ornithologist Charles B. Cory.

This species breeds on islands and cliffs in the Mediterranean, with the odd outpost on the Atlantic coast of Iberia.

The nest is on open ground or among rocks or less often in a burrow where one white egg is laid, and is visited at night to minimise predation from large gulls.

In late summer and autumn, most birds migrate into the Atlantic as far north as the south-western coasts of Great Britain and Ireland.

They return to the Mediterranean in February. The biggest colony is located in Savage Islands, Madeira. 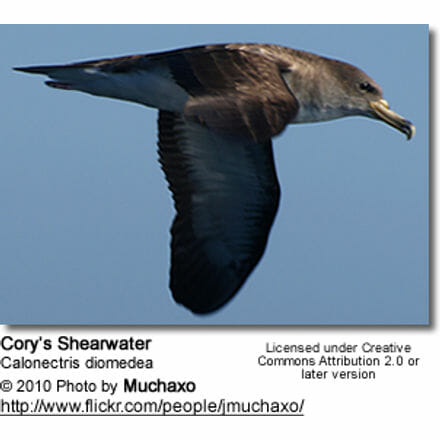 This bird flies with long glides, and always with wings bowed and angled slightly back, unlike the stiff, straight-winged flight of the similarly-sized Great Shearwater.

This shearwater is identifiable by its size, at 45-56 cm in length and with a 112-126 cm wingspan. It has brownish-grey upperparts, white underparts and yellowish bill. It lacks the brown belly patch, dark shoulder markings and black cap of Great Shearwater.

They are closely similar in appearance, although the Atlantic race is larger, and with a stouter bill. They are best distinguished by the pattern of the underwing. 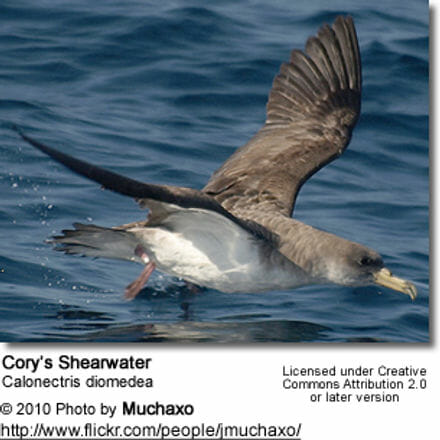 The Cape Verde Shearwater C. edwardsii (Oustalet, 1883) was once considered a subspecies of Cory’s Shearwater but has recently been split off as a separate species (Snow and Perrins 1998). It is endemic to the Cape Verde Islands. It has an all dark, slim bill, and darker head and upperparts than Cory’s. The flight has been described as rather more typically shearwater-like than Cory’s, with stiffer and more rapid wing beats.

Cory’s Shearwater feeds on fish, mollusks and offal (= entrails and internal organs of butchered animals), and can dive deep (50 feet/15 meters or more) in search of prey. It readily follows fishing boats, where it indulges in noisy squabbles.

This is a gregarious species, which can be seen in large numbers from ships or appropriate headlands. The Bay of Biscay ferries are particularly good for this species. 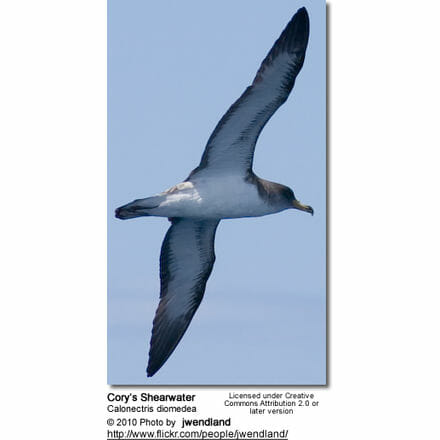 It is silent at sea, but at night the breeding colonies are alive with raucous cackling calls.