The Costa’s Hummingbirds (Calypte costae) are small North American desert birds that occur in the western United States and Mexico, but are known to wander eastward and as far north as Alaska and Canada.

They are closely related to the Anna’s Hummingbirds (Calypte anna). 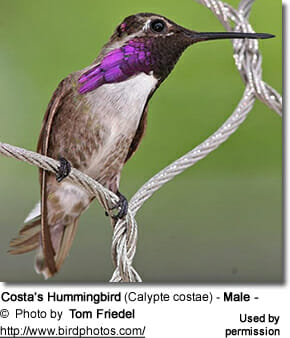 Costa’s Hummingbirds have a very large range and are fairly common in the arid brushy deserts and nearby gardens of the Southwestern United States and the Baja California Peninsula of Mexico. Vagrants also travel north – one was banded in Idaho.

Even though they are traditionally migratory birds, an increasing number of them choose to remain throughout the year in areas with temperate climates, where food supplies are ample (with winter blooming plants and/or access to garden feeders).

They typically only migrate short distances (compared to other hummingbird species) and are usually among the first migrant birds to arrive in their breeding territories.

These mobile birds will leave areas when nectar becomes depleted, or when temperatures get too hot for their comfort, in which case they usually leave their desert breeding grounds to move up to higher altitudes (up to 5,000 ft or 1,500 m) or west to the coast, with a more temperate climate.

Costa’s have been observed in …

Migratory Costa’s typically winter in southern California south to west-central Mexico west to the Mexican state of Nayarit. However, there are reports of them occurring at the southern tip of Mexico (Baltosser 1989, 1996).

This bird is believed to be the most arid-adapted hummingbird within North America. They are typically found in dry and open chaparral, scrub or woodland habitats, with a variety of plant life, such as desert scrub with flowers, cactus, ocotillo, chuparosa, and wolfberry. They are typically found near plants such as the Joshua tree (Yucca brevifolia) and cholla cactus (Opuntia acanthocarpa).

Outside the breeding season, they rarely move up into mountain meadows.

As is the case with many bird species, the Costa’s continued existence is threatened by the destruction of its native habitat. A lot of their natural breeding ground (coastal scrub) has been converted for human uses (agriculture, residential development, etc.) .

Garden feeders and exotic plants provide a temporary relief; however, don’t provide enough nutrition to ensure their long-term survival. In addition to which, these small birds are usually outcompeted for food by larger hummingbird species (Baltosser 1996). 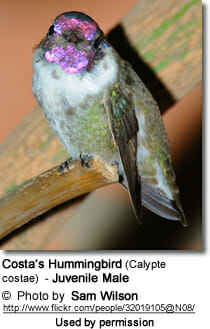 They favor flowers with the highest sugar content (often red-colored and tubular-shaped) and seek out, and aggressively protect, those areas containing flowers with high energy nectar.

Many native and cultivated plants on whose flowers these birds feed heavily rely on them for pollination. Costa’s Hummingbirds, in particular, provide a method of pollination for various desert plants and cacti (Baltosser 1996).It is believed that the Costa’s is the chief pollinator for the Red Penstemon, for example, as in some areas where this plant occurs, the Costa’s Hummingbird is the only resident hummingbird. The mostly tubular-shaped flowers actually exclude most bees and butterflies from feeding on them and, subsequently, from pollinating the plants.

In winter, when flowering plants may not be readily available, they may drink the sap from holes created by sapsuckers, as a substitute for nectar. They may also visit local hummingbird feeders for some sugar water, or drink out of bird baths or water fountains where they will either hover and sip water as it runs over the edge; or they will perch on the edge and drink – like all the other birds; however, they only remain still for a short moment. Males establish feeding territories, where they aggressively chase away other males as well as large insects – such as bumblebees and hawk moths (which are easily confused with hummingbirds from a distance) – that want to feed in their territory. They use aerial flights and intimidating displays to defend their territories.

Its song consists of a light chip and loud, repeated, high tinkling notes “zing zing zing”. This high-pitched call may be given from an open perch or at the bottom of the male’s U-shaped dive display.

Males are generally less vocal than females of that species. They rarely call – except when alarmed or during a courtship display.

The females vocalize frequently when they see food sources or prey; or when alarmed or during the mating ritual.