The Cotton Pygmy Goose or the Cotton Teal, Nettapus coromandelianus, is a small perching duck which breeds in India, Pakistan, southeast Asia and south to northern Australia. 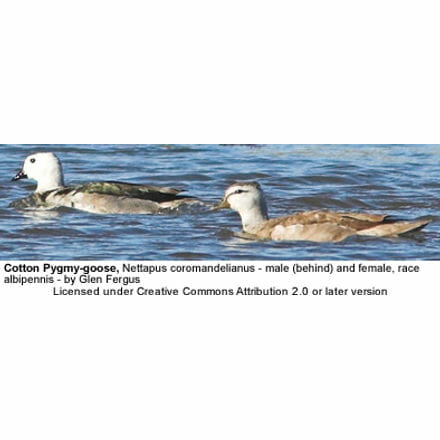 It is largely resident, apart from dispersion in the wet season, but Chinese birds winter further south. It nests in tree holes, laying 8-15 eggs.

This is an abundant species in Asia, although the slightly larger Australian race appears to be declining in numbers.

Swift on the wing, and can dive creditably on occasion.

Rounded head and short legs. In flight, the wings are green with a white band, making the male conspicuous even amongst the huge flying flocks of the Lesser Whistling Duck, which share the habitat.

Female paler, without either black collar and only a narrow or nonexistent strip of white wing-bar. In non-breeding plumage (eclipse) male resembles female except for his white wing-bar. Flocks on water bodies (jheels), etc.

The breeding season is July to September (SW. monsoon). They nest in tree holes – in a trunk standing in or near water. The nest is sometimes lined with grass, rubbish and feathers. The hen lays 6 to 12 ivory white eggs.

Their habitat is still freshwater lakes, where it feeds on seeds and other vegetation, especially water lilies.ts, crustaceans, insects and pond vegetation.