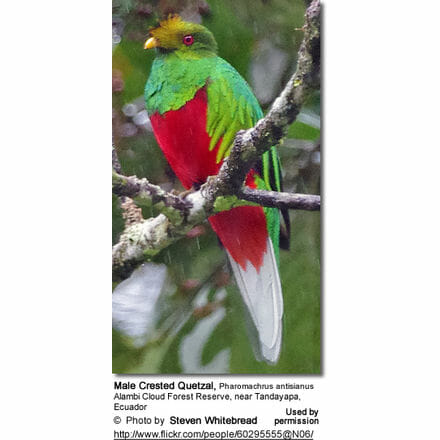 They occur naturally in the Andes – from northwestern Venezuela west to northern Colombia and south along the Andes mountain range to Ecuador, Peru and central Bolivia.

The related Golden-headed Quetzals are typically found at higher elevations.

These poor flyers spend most of their time perching. When foraging, they have been observed to hover in front of their feeding plants for short periods plucking fruit from trees. 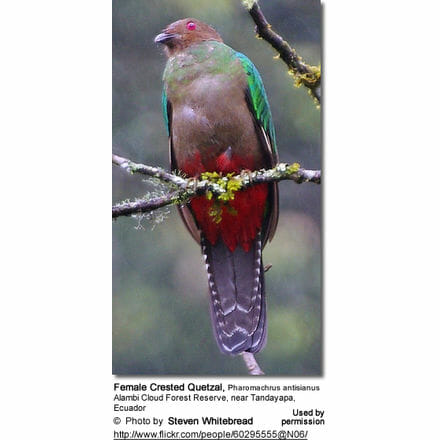 During the breeding season, the adult male grows a long tail that can exceed 30 inches or 76 cm in length.

Adult males have a bright, glossy green plumage, except for a crimson red abdomen and vent area; violet wings and white undertail feathers. Males have short, bushy crests that range in color from green to turquoise. The feathers below the bill are turquoise.

On the onset of the breeding season, the breeding-age male grows an extremely long tail that ranges in color from green, blue and violet. It is believed that the length and quality of the tail is an important consideration for females when choosing a mate.

Females resemble the males, except their heads are a plain brown without the bushy crests; and only their lower bellies are red. The upper part of the belly is brown. There are some green feathers on the chest. The females’ undertail feathers are mostly dark brown with some white barring in the outer webbing. 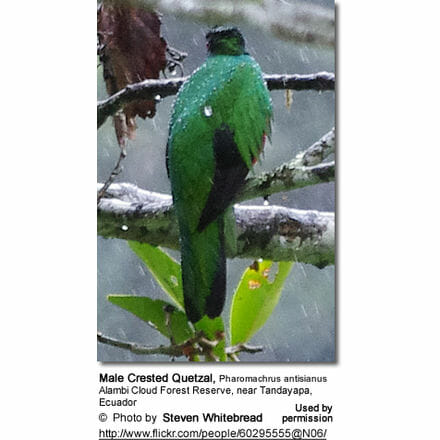 Immature birds have dark plumage with buffy markings throughout and tawny abdomens.

Male Crested Questals can be differentiated from the Golden-headed Quetzals by their all white undertail feathers.

Females have fewer green feathers no the chest than the female Golden-headed.

The white under tail feathers and the head crest distinguish Crested Quetzals from the other species of trogons.

Crested Quetzals are known to feed on 41 species of fruits in the Lauraceae family. Additionally, they will take small amphibians, reptiles and insects. 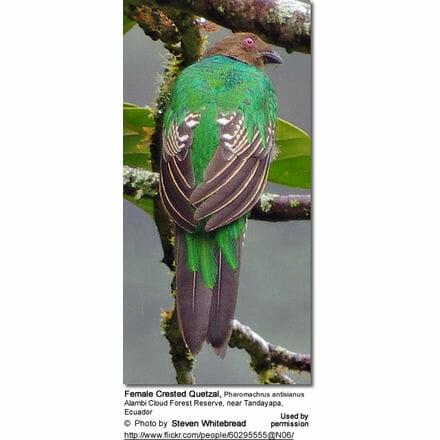 Crested Quetzals are monogamous. Most breeding takes place between February through June. Up to two broods may be produced in each season.

These cavity nesters often take over old Woodpecker nests, or they may excavate holes in decaying trees. Nests are likely to be reused over several seasons.

The average clutch consists of 1 – 2 light-blue eggs that are incubated for about 18 days to hatching. The hatchlings emerge blind and helpless and are fed and protected by both parents. The eyes start to open after about one week.

Parents feed them insects, small amphibians and some fruits.

The chicks fledge the nest when they are about 3 – 4 weeks old. Within 3 to 4 weeks, they will search their own territories, but typically, they remain close to their parents for several years. 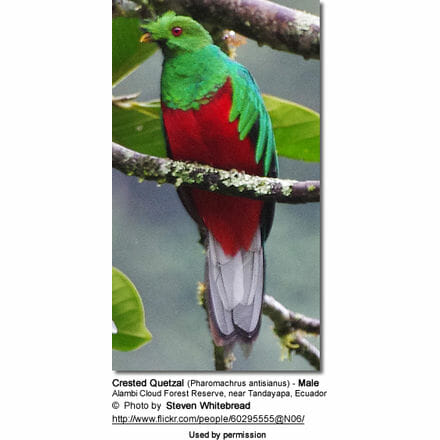