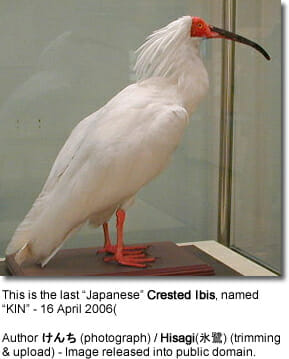 This species has now disappeared from most of its former range and was believed to be extinct until 1980. However, in 1981 the only known population consisting of 7 individuals was discovered in the Shaanxi province of China. Conservation efforts are ongoing to reintroduce captive birds back into their natural habitat.

This is a large (up to 78.5 cm long), white-plumaged ibis of pine forests.

Its head is partially bare, showing red skin, and it has a dense crest of white plumes on the nape (back of the neck).

Their diet also includes insects, small mammals, as well as lizards, skinks, and other small reptiles caught on land.