The Crimson Chat (Epthianura tricolor) is a species of small birds found in Australia.

Epthianura – also known as the Australian chats – were once thought to constitute a separate family, the Epthanuridae, although most taxonomists today treat them as a subfamily, Epthianurinae, of the honeyeater family Meliphagidae.

They are known by many other common names including: Tricolored Chat, Crimson tang, and Red canary in English; Scharlachtrugschmätzer by Germans; Curruca Carmesí in Spanish; and Epthianure tricolore in French.

Crimson Chats are usually 4-5 inches (10-13 cm) in length and 10-11 grams in weight. They have long, thin legs; a pointy, downward curving bill; and a brush- like tipped tongue. Adult males are covered in brown feathers, have red crowns and under parts; a black mask around their eyes; and white throats.

Females and younger Chats are colored similarly, but with paler markings. The males are usually more brightly colored than females, specifically during the breeding season in order to attract a mate.

A bird species similar to and often confused with the Crimson Chat is the Male Red-capped Robin, whose scientific name is Petroica goodenovii.

However, there are three main differences between their characteristics. A male Crimson Chat has a white throat as well as a plump body; however, the Robin has a black body, white wing marks, and a dark eye.

Also, the Crimson Chat’s bill is skinnier and longer than the Robin’s.

When a Crimson Chat is seen, a saltbush, Spinifex, or Mulga Woodland plant can usually be found, as they are plants associated with this type of bird. According to Federal and NSW organizations, the conservation of this bird is secure. Its only real threat is being killed by predators. 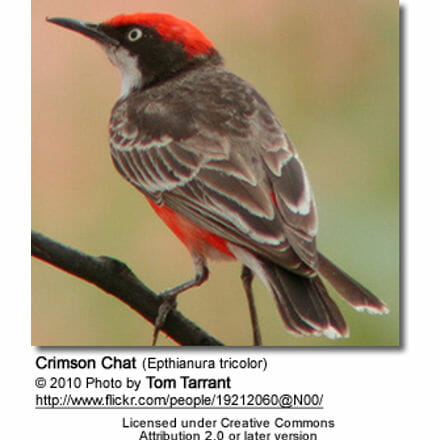 Crimson Chats inhabit a specific continent, Australia, have a preferred habitat, and a unique migration pattern. Crimson Chats can be found in deserts, semi-arid climates, woodlands, grasslands, and coastal shrublands in the central part of Australia from the west coast to the Great Dividing Range and from the tropics to the south coast.

Generally, they tend to inhabit areas on the fringes of wet regions, where it is more dry. They live in various types of shrubland: saltbush, blue bush, acacia, and samphire. It moves to wetter areas when rainfall is insufficient, which means there aren’t enough nutrients produced for the birds to consume).

The flocks of Crimson Chats may wander over a significantly wide area around their range in order to track rain. (This helps them find the best flowers and nectars.) However, Chats do not follow routine seasonal longtime migrations.

Crimson Chats eat insects and spiders that are on the ground or in shrubs, and they can use their brush-like tongue to extract nectar or take seeds from flowers close to the ground. They walk more often than they hop and are usually seen on or near the ground.

Crimson Chats are found in small flocks and go in pairs throughout the breeding season and the rest of the year. Chats have a long breeding season from August to November and a shorter period after the rain season from March to April. These flocks form clusters of nests, which are defended by both the male and female Chats.

Most calls are soft, metallic twangs (‘dik it – dik it’) or high pitched whistles (like ‘see’.) When agitated they make an aggressive chattering sound (a quick ‘check – check’), which is where their name originates.

In this species, both sexes help build a nest in a cup shape, which is located close to the ground. It is usually made with grass, rootlets, hair, feathers, and twigs. The female lays 2 to 5 pink and white, brown-red spotted eggs, approximately ½ inch (1-2 cm) in length and width.

Both parents help incubate the eggs for around two weeks and feed the young birds once they have hatched until they can fly on their own to find food. If a predator comes near the nest either parent will fake an injury to distract the creature away from the nest. Predators include cats, snakes, foxes, and larger birds like ravens.

The Crimson chat is a unique bird in that it resides exclusively in particular parts of Australia, follows an irregular migratory path, forms nesting communities, and possesses unique coloring, among other things.