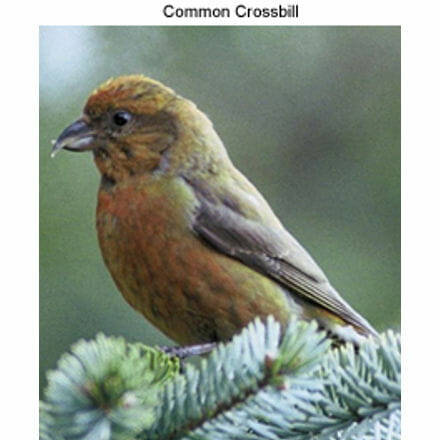 The crossbills are birds in the finch family Fringillidae. The one to five (or possibly many more) species are all in the genus Loxia. These birds are characterised by the upper and lower beaks crossing at their tips, which gives the group its English name.

These are specialist feeders on conifer cones, and the unusual bill shape is an adaptation to assist the extraction of the seeds from the cone. These are birds typically found in higher northern hemisphere latitudes, where their food sources grows. They will erupt out of the breeding range when the cone crop fails.

Adult males tend to be red or orange in color, and females green or yellow, but there is much variation.

The different species are each adapted to specialising in feeding on different conifer species, with the bill shape optimised for opening that species of conifer. This is achieved by inserting the bill between the conifer cone scales and twisting the lower beak towards the side to which it crosses, enabling the bird to extract the seed at the bottom of the scale with its tongue.

The mechanism by which the bill-crossing (which usually, but not always occurs in an 1:1 frequency of left-crossing or right-crossing morphs) is developed and what determines the direction has hitherto withstood all attempts to resolve it.

It is very probable that there is a genetic basis underlying the phenomenon (young birds whose bills are still straight will give a cone-opening behavior if their bills are gently pressed, and the crossing develops before the birds are fledged and feeding independently), but at least in the Red Crossbill (the only species which has been somewhat thoroughly researched regarding this question) there is no straightforward mechanism of heritability.

While the direction of crossing seems to be the result of at least 3 genetic factors working together in a case of epistasis and most probably autosomal, it is not clear whether the 1:1 frequency of both morphs in most cases is the result of genetics or environmental selection: populations that feed on cones without removing or twisting them will likely show a 1:1 morph distribution no matter what the genetic basis may be, as the fitness of each morph (genetic mutation) is inversely proportional to its frequency in the population due to the fact that such birds can only access the cone with the lower beak tip pointing towards it to successfully extract seeds, and thus a too high number of birds of one morph will result in the food availability for each bird decreasing (Edelaar et al, 2005).

They can utilise other conifers to their preferred, and often need to do so when their preferred species has a crop failure, but are less efficient in their feeding (not enough to prevent survival, but probably enough to reduce breeding success).

The species are difficult to separate, and care is needed even with Two-barred Crossbill, the easiest. The other three species are identified by subtle differences in head shape and bill size, and are the subject of much taxonomic speculation, with some scientists suggesting that the previously held assumption that the Parrot and Scottish Crossbills and possibly the Hispaniolan and Two-barred Crossbill are conspecific (of, or belonging to, the same species).

The identification problem is least severe in North America, where only Red and White-winged occur, and (possibly) worst in the Scottish Highlands, where three ‘species’ breed, and Two-barred is also a possible vagrant.

Work on vocalisation in North America suggest that there are eight or nine discrete populations of Red Crossbill in that continent alone, which do not interbreed and are (like the named species) adapted to specialise on different conifer species. Few ornithologists yet seem inclined to give these forms species status though. Preliminary investigations in Europe and Asia suggest an equal, if not greater, complexity, with several different call types identified; these call types as different from each other as from the named species Scottish and Parrot Crossbills – suggesting either that they are valid species, or else that the Scottish and Parrot may not be.

Species and their preferred food sources are: