The Crowned Eagle or Crowned Hawk-eagle (Stephanoaetus coronatus) is a very large, powerful, crested bird of prey (80–90 cm [2.6-3 ft] long, approximately) found in tropical Africa south of the Sahara; in Southern Africa it is a common resident in suitable habitat in the eastern areas. It is the only extant member of the genus Stephanoaetus. A second species, the Malagasy Crowned Eagle (Stephanoaetus mahery) became extinct after humans settled on Madagascar (Goodman, 1994).

It mainly inhabits dense forests. Its staple diet consists of monkeys (particularly those of the genus Chlorocebus) and other medium-sized mammals), such as the Cape Hyrax and small antelopes. To a far lesser extent, birds and monitor lizards are also taken. However 98% of the diet is mammalian.

While it, on average, weighs less and has a smaller wing-span than the Martial Eagle (the total length of the two is very similar), the Crowned Eagle is Africa’s most powerful and ferocious eagle in terms of the weight and nature of prey taken. It preys on mammals, especially duikers, weighing up to 34 kg (75 lbs). Due to their similarities, the Crowned Eagle is often considered Africa’s analogue of the Harpy Eagle.

The Crowned Eagle has dark grey upperparts with rufous and white below; its belly and breasts are heavily mottled with black. This eagle has short, broad and rounded wings for added manoeuvrability in its environment.

The rufous underwing coverts and strongly barred white and black outer wings and tail are all diagnostic in flight. The large crest (often raised) combined with this bird’s very large size make the adult near-unmistakable at suitable range.

The juvenile is often confused with the juvenile Martial Eagle, especially in flight. The juvenile Crowned is distinguished from that species in having a much longer, more heavily barred tail, spotted legs and an all-white head. 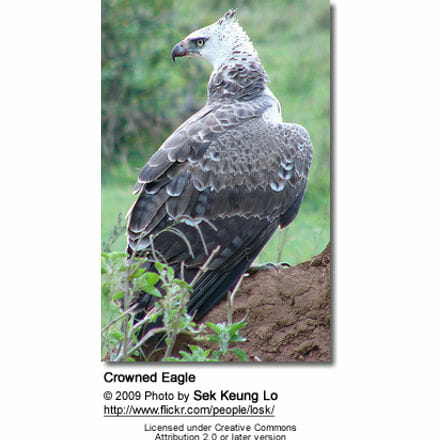 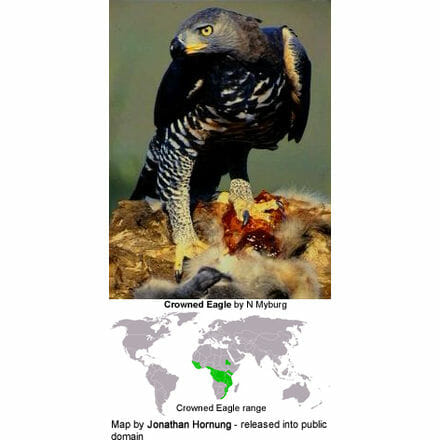 Its range also extends westward about as far as Liberia, though its distribution is severely fragmented in these areas. The eagle is less prominent at the extremes of its range, being most populous between Zimbabwe and Tanzania; it is restricted to denser vegetation and forests throughout its distribution.

The Crowned Eagle inhabits dense forests (sometimes plantations), heavily wooded hillsides, dense woodland and rocky outcrops throughout its range, at an altitude of up to 11,000 ft. Owing to lack of suitable habitat (through deforestation and industrialisation), the eagle’s range is discontinuous.

The Crowned Eagle is non-migratory and is largely sedentary, usually inhabiting a fixed territory for most of its lifespan. There is evidence that the birds migrate moderate distances when circumstances require it, for example when changing mates in isolated breeding areas (The Hawk Conservancy Trust, 2006). Such migration is local in scale and is not comparable to the seasonal migrations of some other eagle species (e.g., the Steppe Eagle.)

Whilst essentially an elusive species (owing mostly to its habitat), the Crowned Eagle is highly vocal and has a noisy, undulating display flight. The male performs an elaborate rise-and-fall display over the forest canopy both during the breeding season and outside it as a territorial proposition. During this display, the male is noisy and may reach heights exceeding 900m (~ 3000 ft). The voice is a series of loud whistles that rise and fall in pitch. The female may also perform independent display flights and pairs are also known to collaborate in spectacular tandems.

The Crowned Eagle’s staple diet is mostly mammalian, with primates being the most commonly taken prey (82% in one study in Uganda). In suitable habitat it will also take Hyraxes and small Antelope such as Duiker. An adult eagle will only resort to hunting large wild fowls (such as Guineafowl), Monitor lizards and snakes when mammalian food sources are scarce, which is uncommon. Juveniles and subadults, however, may take these types of prey more frequently.

Being a forest-dwelling species, the Crowned Eagle has no need to travel great distances to hunt, nor employ a great deal of active hunting flight (such as soaring seen in savannah-dwelling species). Rather, it tends to hunt passively; a soaring range of 4–10 miles is the norm and is only seldom exceeded. After flying above the canopy and locating a suitable hunting spot (sometimes by the call of the noisy Vervet monkey), the eagle will wait on a perch, perhaps for a nearby troop of monkeys to be spotted. Following the sighting of suitable prey, the eagle quickly and stealthily manoeuvres itself through the forest towards its prey, a certain element of surprise inherent in its final approach. The sharp, powerful talons may produce sufficient force to kill the prey on impact; if not, death from trauma or asphyxiation soon follows. Typically, the eagle can carry a mass roughly equal to its own (~ 3–6 kg) to its nest or perch; anything heavier is dismembered and returned to the nest or perch in pieces. Parts of larger prey are often cached for later consumption.

Crowned Eagle pairs breed once every two years; a single breeding cycle is of approximately 500 days in duration.

The pair collaborate in building a massive nest in a fork of a large forest tree, typically 15–40 m (50–140 ft) above the ground. A nest built from scratch may take several (up to 5) months to construct, however existing nests are often repaired and re-used during successive breeding seasons. A larger nest may measure up to 2.5 m (8 ft) across and up to 3 m (10 ft) deep and consists of both dead and greener branches.

The Crowned Eagle is fairly common in suitable habitat, though its numbers show decline in sync with deforestation. It is far more common in protected areas and reserves than elsewhere in its range, though is still recorded consistently outside of these areas. Its numbers are probably higher than modern suspicion might suggest, though invariably hinge on rates of deforestation, especially in the north of its range.

Like the slightly larger Martial Eagle, the Crowned has throughout modern history been persecuted by farmers, who hold that the bird is a threat to their livestock. Neither the Crowned nor the Martial have been implicated in regular attacks on livestock, with only isolated cases of starving individuals attacking calves. It is worth noting that the Crowned in particular rarely leaves the forest to hunt, and occasions where it soars outside of dense forest are usually owing to territorial or breeding-related behaviour.