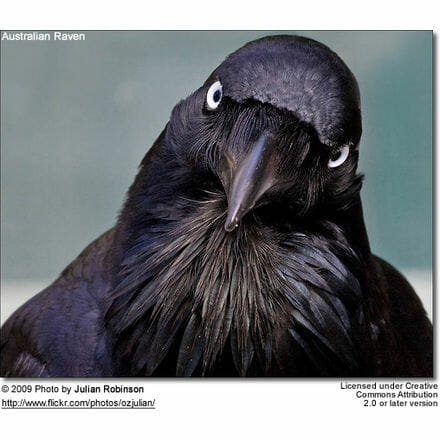 Both the Ravens and the Crows are members of the bird genus “Corvus” – informally known as the “crow family.” The term “crow” is often universally applied to all members in that family.

In common usage, the larger birds, with shaggy throat feathers, are generally called “ravens” and the smaller species are typically referred to as ” crows.”

Overall, the larger body size, the bulkier bill and the shaggy throat of a raven are diagnostic identifiers.

Below the differences are described in more detail.

Ravens are noticeably larger than crows:

Crows have weaker bills that are smaller and mostly flat. 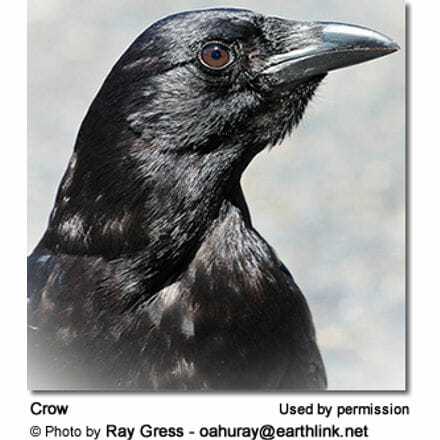 Both species have some iridescence to their plumages; there is a richer sheen to the Raven’s plumage – compared to the somewhat duller plumage of the Crow.

In the right light conditions, the Raven’s sheen is blue or purple; and greenish in Crows.

Crows may also have lighter markings (particularly before the molt).

Ravens have shaggy feathers around the throat and above the beak. These “feather tufts” are absent in crows, except for a fluff of feathers on the Crow’s crown giving the appearance of a “head crest.”

Ravens have more tapered, longer, pointed wings with longer primaries (flight feathers) and more spacing between them, giving their wings a ‘fingered’ appearance.

Ravens have a “raptor-like’ flight; they tend to soar in the air for extended periods and sometimes do somersaults in flight giving them the appearance to “dance” in mid-air. Their wings make “swish, swish” sounds, while the wing beats of crows are usually silent. Ravens flap their wings far less often than Crows. Crows never “soar” longer than a few seconds and they don’t do “somersault” in mid-air. In flight, Crows appear to be shorter-necked than Ravens. 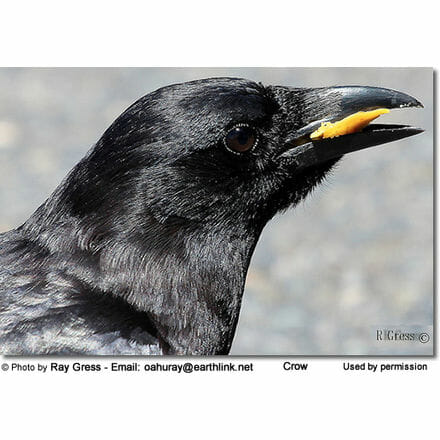 Ravens have a varied and expansive repertoire of different vocalizations (100 or more); the most familiar of which are a deep, reverberating, hoarse “Gronk-Gronk” or “croooaaak;”

Crows usually occur in large flocks. Ravens tend to be less social and are usually seen alone or in pairs. However, they may occasionally roost and feed in flocks.

Ravens are more likely to be found in remote wooded areas, meadows or hills.

Both crows and ravens are opportunistic feeders that eat almost anything they can swallow.

However, Ravens favor carrion (particular cattle and sheep); in addition to taking insects and produce.

Crows only eat carrion on occasion, and their diet includes many other food items, including insects, mollusks, seeds, fruit, nuts, mice, eggs, nestlings of other birds and fish.

Ravens have a lifespan of about 30 years; crows up to 8 years (longer in captive situations).