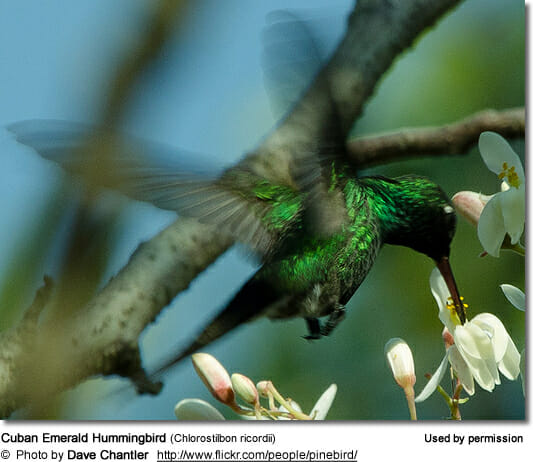 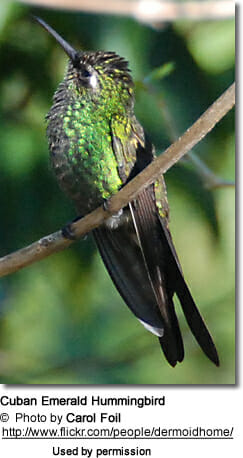 These three species were formerly separated in genus Riccordia and included the Brace’s Emerald (Chlorostilbon bracei) – an extinct race that was endemic to the main island of the Bahamas, New Providence. However, this form is now by most authorities considered to be a separate species. 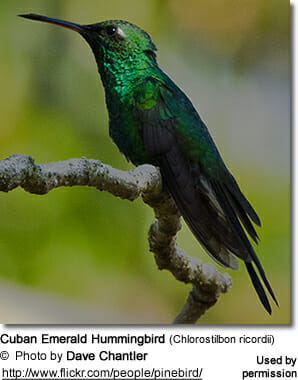 Cuban Emerald Hummingbirds are native to:

They occur in a wide range of semi-open habitats, but also live in forests and gardens. They are common in parts of their native range (Stotz et al. 1996).

The male has a short bill with a black upper beak and a red lower beak with a black tip. The plumage above is dark green and the plumage below is glossy green with a hint of metallic blue. The undertail feathers are white and the tail is deeply forked.

The female resembles the male for the most part, but her plumage below is brownish-grey with green flanks. Her tail is slightly less forked. 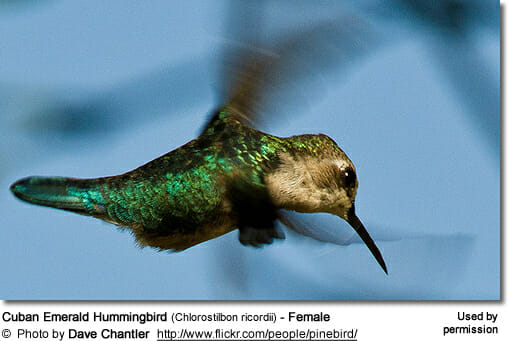 The Cuban Emerald Hummingbirds are solitary in all aspects of life other than breeding; and the male’s only involvement in the reproductive process is the actual mating with the female. They neither live nor migrate in flocks; and there is no pair bond for this species. Males court females by flying in a u-shaped pattern in front of them. He will separate from the female immediately after copulation. One male may mate with several females. In all likelihood, the female will also mate with several males. The males do not participate in choosing the nest location, building the nest or raising the chicks.

The female Cuban Emerald Hummingbird is responsible for building a small cup-shaped nest out of green moss and lines it with other soft plant fibers, and strengthen the structure with spider webbing. The nest is typically found on a twig 1-3 m high in bush.

The Cuban Emerald Hummingbirds primarily feed on nectar taken from a variety of brightly colored, scented small flowers of trees, herbs, shrubs and epiphytes. In the Bahamas, they appear to be particularly fond of the native Brace’s Century Plant (Agave braceana).

Its song consists of a vigorous repetition of the chit call usually song by several dozen breeding males in loose leks (= gathering of males for the purposes of competitive mating displays).