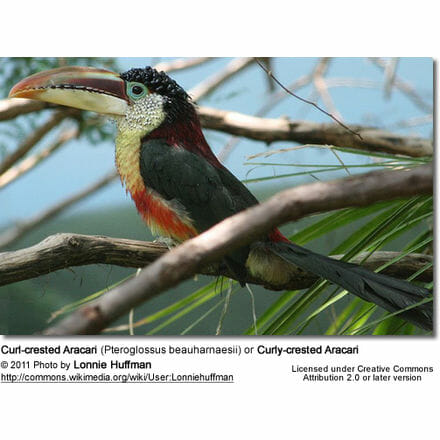 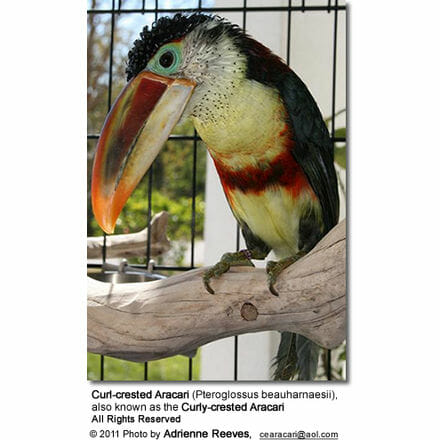 The Curl-crested Aracari (Pteroglossus beauharnaesii) is a South American toucan that is named after its distinctive curly head feathers.

The Curl-crested Aracari range includes central and southern Brazil, ranging as far east as the mouth of the Madeira River and westward to the lowland forests of eastern Peru and south into northern Bolivia. Near the Amazon River, its range stretches east to about the Madeira River. Its southern half of its range extends east to the Xingu River.

This species is rare and uncommon within its range and mostly occurs at several localities, including the Tambopata-Candamo reserve in Peru, the Noel Kempff Mercado National Park in Bolivia, and the Cristalino State Park near Alta Floresta in Brazil. 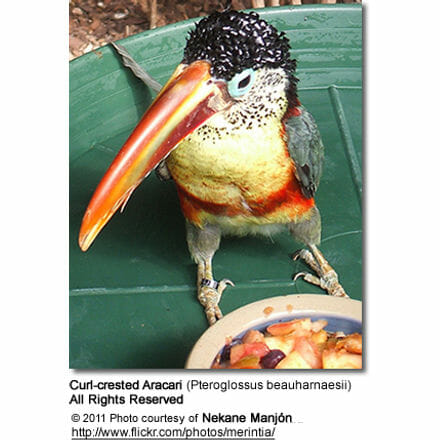 The Curl Crested Aracaris weigh about 210 grams or 7.4 oz and are tied with Black Neck Aracaris for the number two position in size after the Chestnut Eared Aracari. (Ref: Jerry Jennings)

Its most notable feature is the curled feathers on the top of its head (crown). These crown feathers are glossy and have the look and feel of plastic. Its whitish yellow facial feathers have black tips.

The upperparts are dark green with dark red mantle and rump. The breast is yellow with increasing blotches of red to a red and black band.

Compared to other toucans it also has a relatively short bill and a long tail. It has a blue and maroon upper bill and ivory lower bill; and an orangy tip. The bare skin around the eyes is light blue. 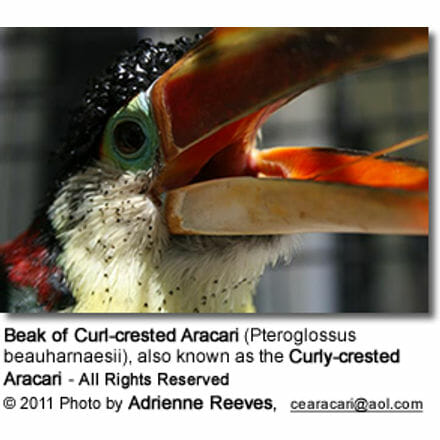 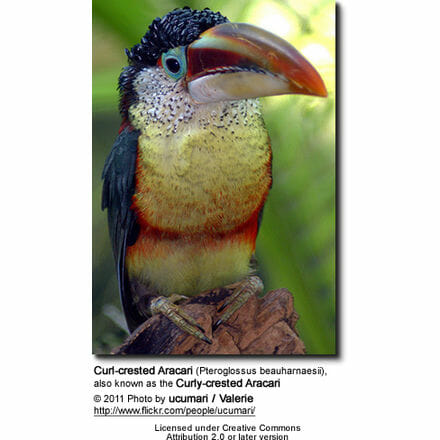 They nest in trees with appropriate hollows, most of which are previously made by woodpeckers. Other hollows are the result of a branch break and ensuing rotting of the heart wood from rain over a period of time.

Both the male and female share the incubation and chick rearing duties. Their eggs are white and elliptical shaped. The clutch size consists of 3 to 4 eggs and the incubation lasts for about 16 days.

The newly hatched chicks are blind and naked with short bills and thick pads on their heels to protect them from the rough floor of the nest. Both parents, as well as their previous offspring and/or possibly other adults, feed the chicks. 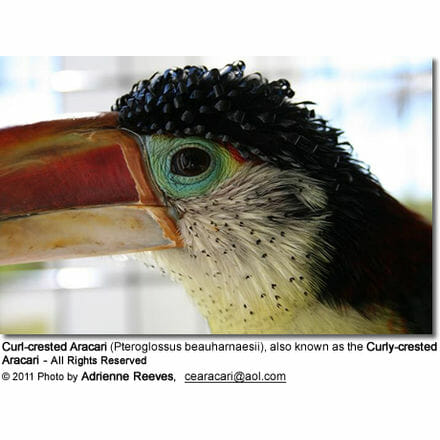 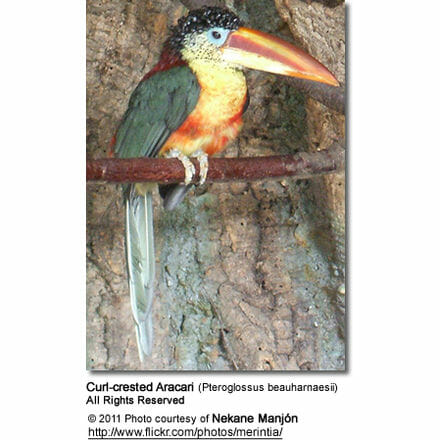 This is not a common species in the United States. In fact until recently, the only ones were kept at the San Diego Zoo (although they may no longer keep them). Some of their offspring ended up at the Dallas World Aquarium.

These active Aracaris require large, planted flights. Aracaris are generally docile and can be kept with smaller birds — but not birds so small that they (or their young) could be considered as prey by these large birds, such as finches. Breeding pairs are best kept alone.

Captive birds may breed in nest boxes with a concave bottom; however, they generally prefer natural nests constructed from palm tree logs, which allows them to dig their nest chambers deeper.

Jerry Jennings, President / Director of Emerald Forest Bird Gardens Fallbrook, CA also imported this species in 2004, and sold some Curly-crested Aracaris to the Dallas World Aquarium and the Riverbanks Zoo in Columbia, South Carolina. At this point in time, over 40 pairs are scattered around the United States that were sold by Jerry Jennings, who himself has 14 breeding pairs. At this point in time sufficient breeding pairs are set up in the United States for this species to be available to private aviculturists. Adrienne Reeves, who bought one of his Curly-rested Aracaris contributed her pet Marley’s photos for publication on the Avianweb.

Jerry Jennings describes this species as

“… an exquisitely beautiful and peaceful additions to the mixed species aviary and their friendly disposition makes them fantastic pets. As handfed babies, they readily imprint on their human companions and quickly bond. They are curious, inquisitive and playful and a delight both in appearance and personality. They are easily trained to potty in the appropriate place as well as do a number of unique bird tricks.” 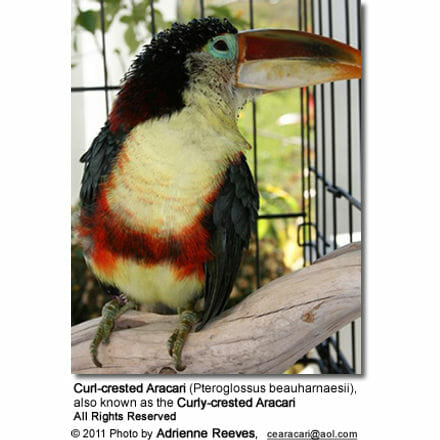 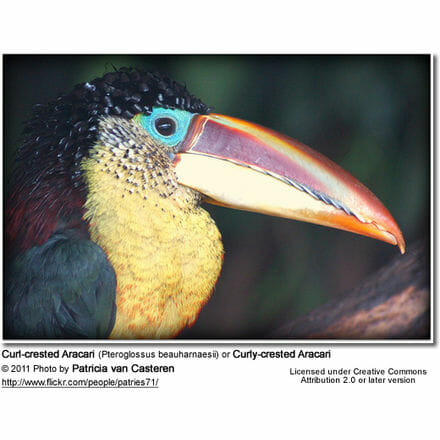 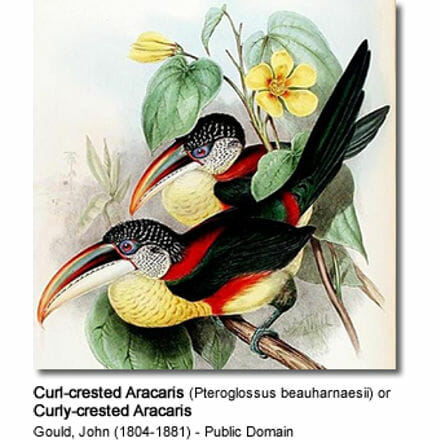 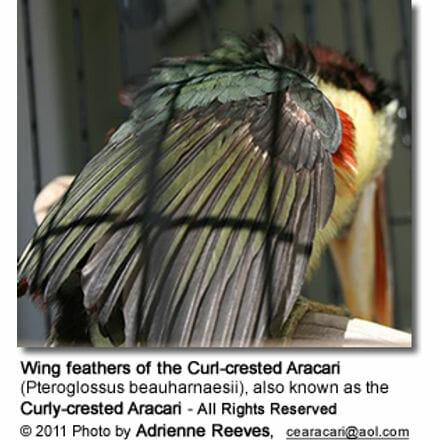