Darwin’s finches (also known as the Galápagos Finches or as Geospizinae) include a group of similar small birds that are closely related, yet have beaks that are different in both shape and size.

Birds in this group became subjects of intense research since specimens of them were first collected on the Galápagos Islands in 1835 during a survey voyage of HMS Beagle.

Charles Robert Darwin, an English naturalist and geologist, initially believed that they were some sort of blackbirds or mockingbirds.

Upon their return, the collected birds were passed on to John Gould – a renowned English ornithologist – for inspection. Gould concluded that these birds were new and distinct forms of true finches. However, in 1993, Charles Sibley and Burt Monroe included these birds in the tanager family. 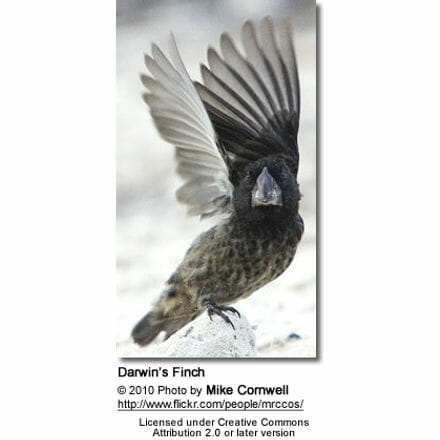 These small birds are native to …

Evolutionists assume that a stock of ancestral finches reached the islands from South American mainland.

Darwin’s theory is based on the fact that different finch populations that descended from this common ancestral stock over time evolved to new biological species to survive in new habitats and differing environmental conditions. This process is referred to as “adaptive radiation.”

Based on the great distance between the islands, these birds could not interbreed, so the different populations on the various islands became distinct.

These isolated populations have shown considerable variations in bill structure and feeding habits that supported Darwin’s theory of evolution.

Peter and Rosemary Grant noted changing climatic conditions from year to year that dramatically altered the available food supply. Taking advantage of localized, differing food supplies required adaptations to the size and shape of their beaks, and foraging techniques. 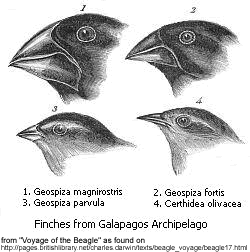 For example, slim, sharp beaks prevailed in insect-feeding birds; and short, thick beaks that were suitable for crashing seeds occurred in seed-eating populations.

Those birds with beak structures that were best adapted for the most abundant food supply (by random mutation) had a competitive advantage over those that didn’t, and enjoyed an increased probability of survival.

They thrived and reproduced more successfully, while all the others gradually perished. The genes for the more specialized beaks were passed on to successive generations. This supported Darwin’s theory of natural selection. 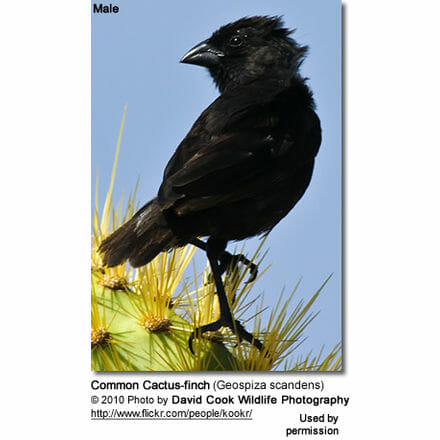 All birds have dull plumages that ranged in color from mottled greyish-brown to black..

Notable variations in beak shapes were noted (please refer to the image above).