It is a resident breeder in Central and South America from southern Mexico south to Colombia, Venezuela and northern Brazil. It also occurs on Hispaniola and some of the Venezuelan islands, and is a very rare vagrant to Trinidad, Curaçao and the USA.

This is a largely nocturnal and crepuscular (active during the twilight) species of arid grassland, savanna, and other dry, open habitats.

The nest is a bare scrape into which two olive-brown eggs are laid and incubated by both adults for 25-27 days to hatching.

The downy young are precocial and soon leave the nest.

The Double-striped Thick-knee is a medium-large wader with a strong black and yellow bill, large yellow eyes, which give it a reptilian appearance, and cryptic plumage. The scientific genus name refers to the prominent joints in the long greenish-grey legs, and bistriatus to the two stripes of the head pattern.

The adult is 46-50 cm long and weighs 780-785 g. It has finely streaked grey-brown upperparts, and a paler brown neck and breast merging into the white belly. The head has a strong white supercilium (line above eye) bordered above by a black stripe. Juveniles are similar to adults, but have slightly darker brown upperparts and a whitish nape.

Double-striped Thick-knee is striking in flight, with a white patch on the dark upperwing, and a white underwing with a black rear edge. However, it avoids flying, relying on crouching and camouflage for concealment. The song, given at night, is a loud kee-kee-kee.

There are four subspecies, differing in size and plumage tone, but individual variation makes identification of races difficult. 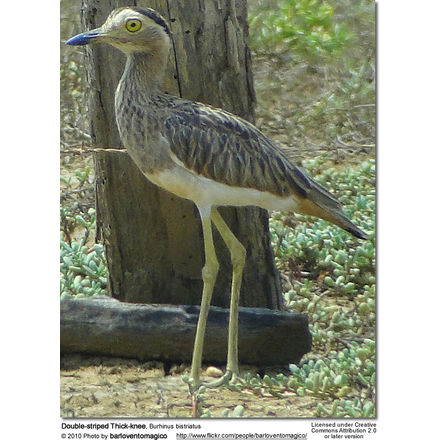 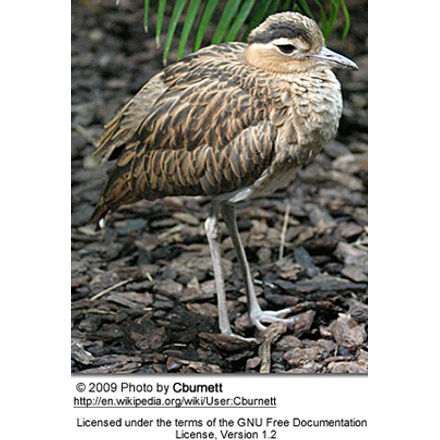 The Double-striped Thick-knee eats large insects and other small vertebrate and invertebrate prey. It is sometimes semi-domesticated because of its useful function in controlling insects, and has benefited from the clearing of woodlands to create pasture.