The Dunlins are a circumpolar breeder in Arctic or subarctic regions. The Dunlins are highly gregarious in winter, sometimes forming large flocks on coastal mudflats or sandy beaches. 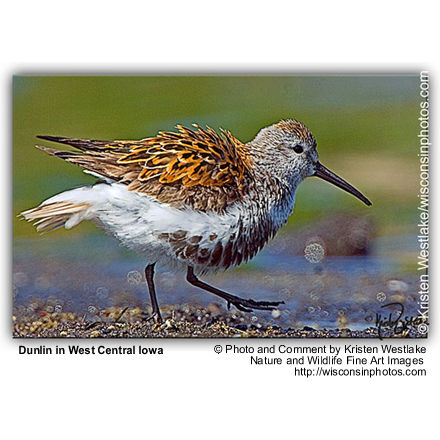 The Dunlin, Calidris or Erolia alpina, is a small wader. It is a circumpolar breeder in Arctic or subarctic regions. Birds that breed in northern Europe and Asia are long-distance migrants, wintering south to Africa and southeast Asia. Birds that breed in Alaska and the Canadian Arctic migrate short distances to the Pacific and Atlantic coasts of North America.

The Dunlin is highly gregarious in winter, sometimes forming large flocks on coastal mudflats or sandy beaches. Large numbers can often be seen swirling in synchronized flight on stop-overs during migration or on their winter habitat.

This bird is one of the most common and best-known waders throughout its breeding and wintering ranges, and it is the species with which other waders tend to be compared.

It shows a strong white wingbar in flight, and it moves along the coastal mudflat beaches it prefers with a characteristic “sewing machine” feeding action, methodically picking small food items. Insects form the main part of the Dunlin’s diet on the nesting grounds; it eats mollusks, worms and crustaceans in coastal areas.

The depicted birds are adults in breeding plumage, with the distinctive black belly which no other similar-sized wader possesses. The winter Dunlin is basically grey above and white below. Juveniles are brown above with two whitish “V” shapes on the back. They usually have black marks on the flanks or belly.

The legs and slightly decurved bill are black. There are a number of subspecies differing mainly in the extent of rufous coloration in the breeding plumage and the bill length. It should, however, be noted that bill length varies between sexes, the females having longer bills than the males. 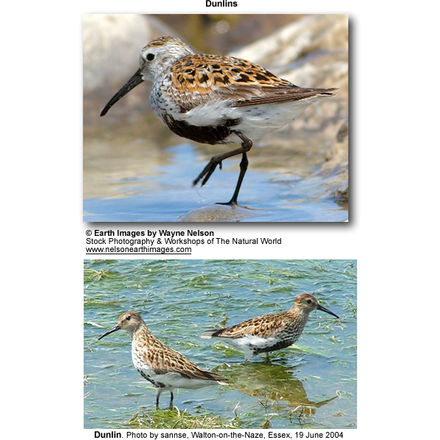 The nest is a shallow scrape on the ground lined with vegetation, into which two to six eggs are laid and incubated by the male and female parents. Both parents feed the young for a few days; after that, the young feed themselves and are able to fly in less than a month.

The call is a typical sandpiper “peep”, and the display song a harsh trill.

The Dunlin is one of the species to which the Agreement on the Conservation of African-Eurasian Migratory Waterbirds (AEWA) applies.

Apparent hybrids between this species and the White-rumped Sandpiper as well as with the Purple Sandpiper have been reported from the Atlantic coasts of North America (McLaughlin and Wormington, 2000, and external link below) and Europe (Millington, 1994), respectively.