The Dusky-throated Hermit (Phaethornis squalidus) – also known as Sooty-throated Hermit – is a South American hummingbird that is endemic to the humid Atlantic forests in south-eastern Brazil; specifically this species is found in south Minas Gerais and Espírito Santo to Santa Catarina.

It formerly included the Streak-throated Hermit as a subspecies.

This small hermit has a total length of approximately 3.5 inches or 9 cm.

The under plumage is pale buff. It has dark streaks on its throat. 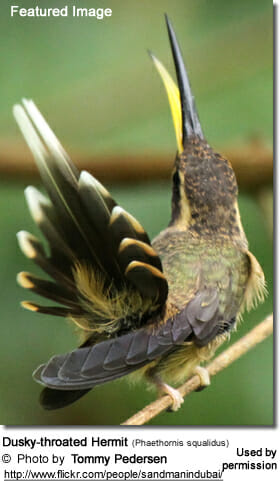 The males of many Hermit species form leks and congregate on traditional display grounds, where females visit to choose a mate. He will separate from the female immediately after copulation. One male may mate with several females. In all likelihood, the female will also mate with several males. The males do not participate in choosing the nest location, building the nest or raising the chicks.

The female Dusky-throated Hermit is responsible for building the remarkable cone-shaped nest which hangs by a single strong string of spiders’ silk and/or rootlets from some overhead support, which could be a branch or the underside of the broad leaves of, for example, Heliconia plants, banana trees or ferns about 3 – 6 ft (1 – 2 m) above ground. However, these unusual nests have been found beneath bridges, in highway culverts and even hanging from roofs inside dark buildings. The nest is often near a stream or waterfall. It is constructed out of plant fibers woven together and green moss on the outside for camouflage in a protected location.

She lines the nest with soft plant fibers, animal hair and feather down, and strengthens the structure with spider webbing and other sticky material, giving it an elastic quality to allow it to stretch to double its size as the chicks grow and need more room.

The average clutch consists of two white eggs, which she incubates alone, while the male defends his territory and the flowers he feeds on (although hermit males tend to be less aggressive than the males of other hummingbird species).

The Dusky-throated Hermits primarily feed on nectar taken from a variety of brightly colored, scented small flowers of trees, herbs, shrubs and epiphytes.