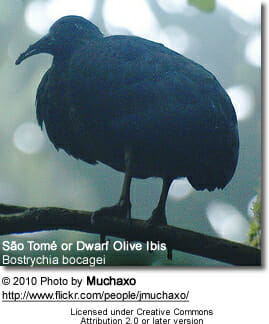 The Dwarf Olive Ibises (Bostrychia bocagei) – also known as SÃ£o TomÃ© Ibises – are critically endangered ibises with only about 50 surviving individuals occurring in the wild.

They were previously believed to be a subspecies of the larger Olive Ibis, but are now by most considered a separate species.

As is suggested by the name, the Dwarf Olive or SÃ£o TomÃ© Ibises are native to SÃ£o TomÃ© e PrÃ­ncipe – an island nation in the Gulf of Guinea, off the western equatorial coast of Central Africa; where they are mostly found in primary forest below 450 m altitude.

Their numbers declined due to habitat loss, predation by introduced mammals and hunting.

They plumage is a mostly slight bronze; the head is a dull olive with black surroundings around the eyes and the base of the bill.

The Dwarf Olive Ibises are generally quiet, but occasionally various coughed grunts can be heard; or – when going to roost – a harsh honking; when alarmed or in distress, their calls sound like kÃ h-gÃ h kÃ h-gÃ h.

The Dwarf Olive Ibises often forage for food in swampy areas bordering watercourses and on forest floor with sparse undergrowth – particularly where the ground has been disturbed by wild pigs, as well as in shallow waters.

In water, they mostly feed on aquatic insects, mollusks, frogs, and food sifted from the water surface.

The average clutch consists of 2 €“ 4 eggs. The nests are often reused year-after-year.