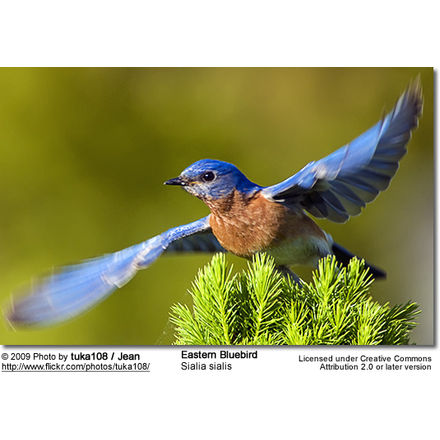 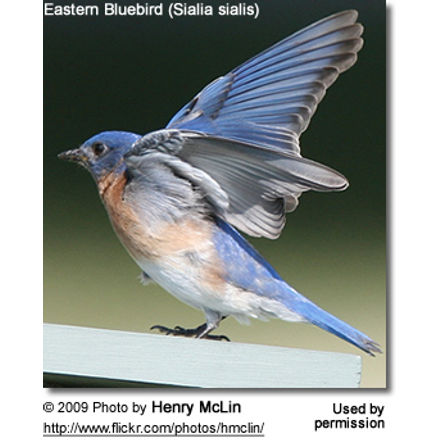 Within their range, these birds are quite distinctive. The only other birds they could be confused with are their cousins – the Mountain Bluebirds (Sialia currucoides) and the Western Bluebirds (Sialia mexicana). They share similar plumage details, behavior traits and habits. However, they occupy different ranges with only some overlap in the mid-west and central parts of the United States. The Eastern Bluebirds occasionally hybridize with Mountain Bluebirds in areas where their ranges meet.

During the migration – or at their wintering sites – these social birds may gather in mixed-species flocks of a hundred birds or more that may include – at least in part of their range – Yellow-rumped, Palm and Pine Warblers as well as Dark-eyed Juncos. However, during the breeding season, they tend to aggressively defend breeding and feeding territories. During the winter, they are also known to attack birds entering their favorite feeding areas. 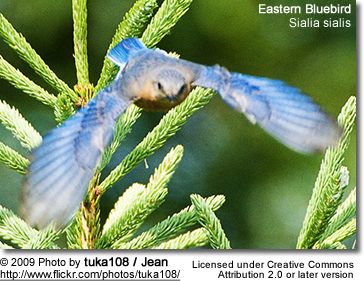 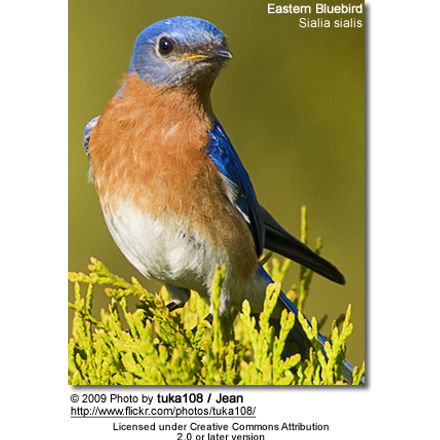 Eastern Bluebirds are fairly common in southern Canada and the eastern three-fifths of the lower 48 states of the USA (east of the Rockies).

They are rare and uncommon in southeastern Arizona, and vagrants in Alberta, Canada and Utah, USA. They have recently reported in western Colorado. They have also been seen in Cuba.

From the US, their range stretches south through Mexico to Nicaragua in Central America.

They inhabit open woodlands, fields, pastures and orchards, and have also adapted to living in suburban settings, including parks and gardens. They prefer open areas with scattered trees for perching, nesting and feeding.

Those birds found in southern parts of their range are often resident (non-migratory), except possibly traveling short distances. On the other hand, northern populations are entirely migratory and typically travel in flocks to and from their winter territories in central and southern United States and northeastern Mexico. Spring migration takes place between February to April, and most return to their winter range when temperatures drop and food sources become scarce (around October). 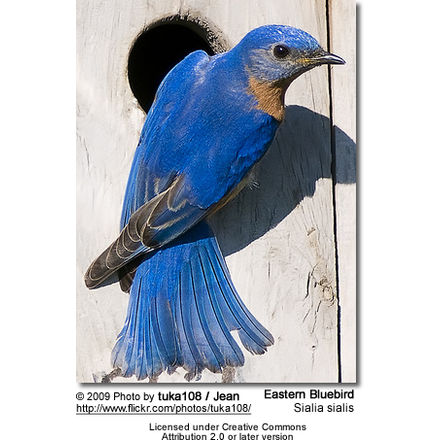 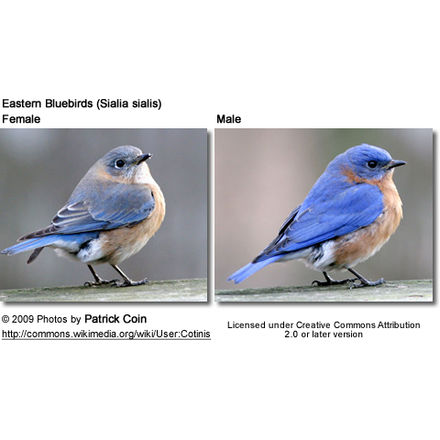 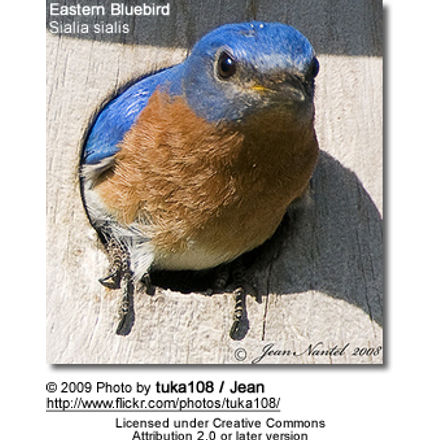 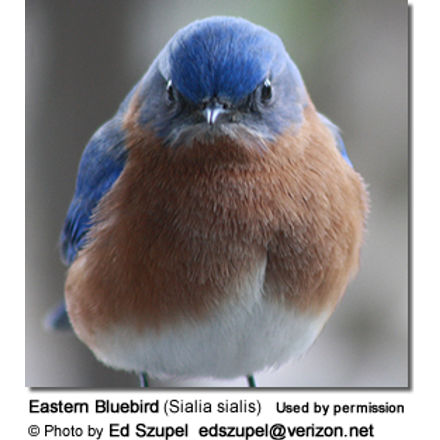 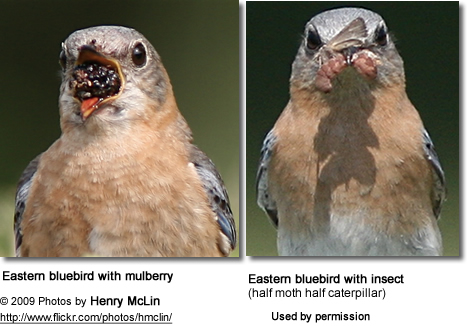 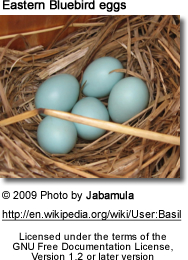 Eastern Bluebirds breed in the spring and summer, typically raising two broods each season in the northern portions of their range and populations breeding further south, may raise up to three broods in a season. The number of broods depends on weather conditions and availability of insect prey (food) needed to raise the young with.

Males attract females by taking nesting materials to potential nesting sites and displaying to the females to attract their attention. They will be waiving their wings while sitting perched on their chosen nest site.

As soon as a male’s efforts are successful, the female will take over and build the nest. Nests historically were tree cavities (such as abandoned woodpecker holes) or other cavities that provided adequate protection. Nowadays, artificial bird houses are often readily accepted. Nests are usually several feet above the ground. The female constructs inside the cavity a small, cup-like structure out of stems, grasses, pine needles, and roots, and lines it with finer grasses, feathers or down, and mammal hair. The whole process usually takes her about ten days.

A clutch may consist of 2 to 7 eggs (the average being 4 to 5). The eggs range in color from white to bluish. The female alone incubates the eggs for 12 to 16 days. The hatchlings are naked, blind and completely helpless. The female generally broods them for up to seven days until she will venture out to feed and hunt food for the young. During the initial brooding period, the male feeds both the female and the young. Once the young are old enough to be left alone, the female will help feed them. The young fledge (leave the nest) when they are about 15 to 21 days old.

The chicks require a diet rich in protein to support their rapid growth, so their diet at this stage is almost entirely made up of insects.

Once the young are independent, they may remain with the parents and help them raise another brood. 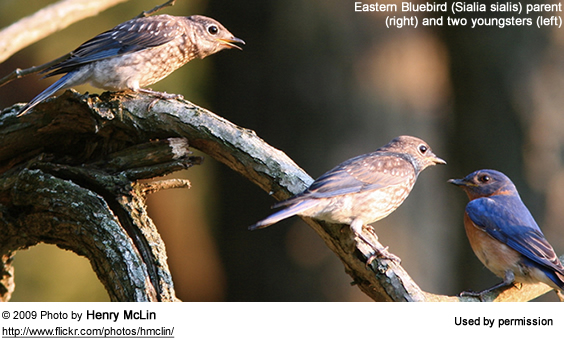 Their musical calls are described as varied, with songs that sound like two-noted too-lee, chiti WEEW wewidoo, or other mellow series of warbled phrases.

The male’s calls are soft warbles of jeew or chir-wi. 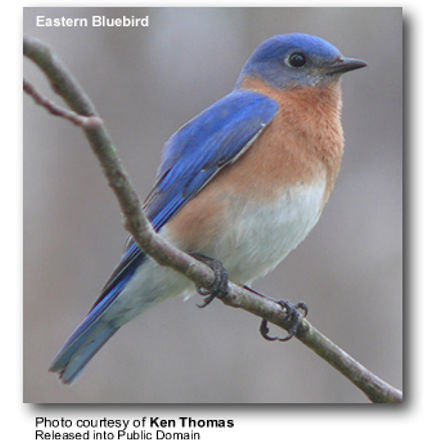 Eastern Bluebirds can live 8 – 10 years. The oldest recorded bird was 10 years 5 months old. However, most birds don’t make it through the first year due to harsh environmental conditions during the nesting period to some extent, but primarily they fall victim to predators, such as cats, chipmunks, squirrels, raccoons, and larger birds.

Once quite common throughout their range, the number of Eastern Bluebirds declined drastically this century – in some areas as much as 90%. This is attributed to:

Artificial Bluebird Houses: Bluebird trails were implemented, where lines of bluebird houses were put up, monitored and maintained. The information gained by these measures were helpful in gaining a better understanding what is needed to help these birds survive. Backyard birders properly designed and strategically placed bird houses, which resulted in increased numbers of bluebirds.