The first Embdens arrived in Boston in 1821, where they were initially referred to as “Bremens” – named for the port of departure (Bremen in Northwest Germany).

Others argue that this breed got its start in Denmark. Edward Brown – author of “Races of domestic poultry”, 1906 – believed that the Embden was created by crossing the German White with the English White. Some authorities suggest that the large size of this breed was a result of selective breeding with Toulouse Geese. This breed was refined further in England to be a more compact shaped goose. 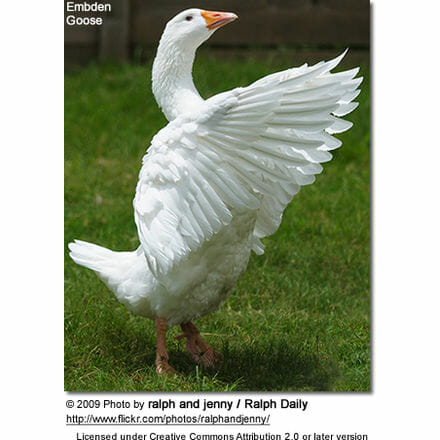 The Embden Goose is the tallest of all geese, reaching over 3.3 feet or one meter in height. Embdens in the UK are usually a little shorter and stockier than those found on the continent.

The head is oval-shaped. They have long, graceful necks and short tails. The eyes are clear blue.

Adults have a pure white plumage. Birds under a year of age may have some grey feathers – typically on the back or rump.

The short bill is bright orange white a flesh-colored bean on the tip. The fairly short legs and feet are orange.

Males and females look alike. The males are generally larger and their behavior bolder than that of females’. The males’ voices are also generally shriller. However, if breeding is the main goal and accurate sexing is important, DNA or vent sexing is recommended.

Vent sexing entails gently squeezing feces out of chick’s vents (also called cloaca), thus opening it up, allowing you to see if there is a small “bump” which would indicate that it is a male. This being said, some females also have these bumps, but if they do, they rarely are rarely as large as those of male chicks.

Day-old hatchlings can generally be quite accurately sexed, as the grey down of the males is lighter than that of females. However, this visual method only works for as long as the dilution gene whitens the plumage.

The Embden Geese could easily be confused with many commercially bred hybrids; however, identity can usually be confirmed by the color of their eyes and the fact that the Embdens are generally considerably taller than the hybrids. 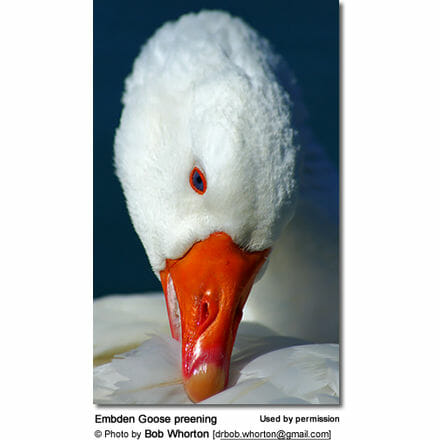 Embdens are popular for a variety of reasons. They are attractive, hardy and generally quiet geese. They are good egg layers, excellent parents, and their heavy weight makes them attractive as table birds.

They are best kept in pairs or in flocks. Although generally calm, males can be quite protective of their females and young. They are best not kept with docile breeds, as they may bully them.

Embdens willingly hybridize with Toulouse Geese or other large geese; and are are commonly paired up with Toulouse geese. The Embdens typically don’t lay as many eggs as the Toulouse, but are generally better mothers.

In developing this breed for exhibitions, the weight of this breed is an important factor, as many poultry shows judge these birds on their dead weight.

These geese typically forage for food in grass and water, and are not choosy as far as food is concerned.  In fact, they tend to make a meal out of anything. Those kept in enclosures will quickly eat areas bald and even kill trees by removing their bark.

If food does need to be supplemented, scratch feed, grass, and various greens – such as collard and turnip greens, spinach, kale – can be provided. Formulated feeds specifically for waterfowl are also available. 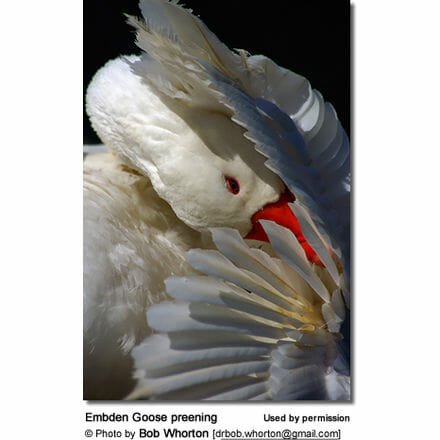 Embden Geese forage for tidbits in the grass and water.