The Emerald Toucanets (Aulacorhynchus prasinus) are small to medium-sized toucans found in Central and South America, where they inhabit humid forests and more open woodland – mostly at higher elevations.

Emerald Toucanets typically forage on fruit, lizards, insects, bird eggs and nestlings. They frequently move together in small flocks of 3 to 10 birds.

Several well differentiated groups have been identified over their large range, which differ in size, plumage and bill coloration. The plumage in all subspecies is mostly green.

The different subspecies are most commonly identified and named for the color of the throat, which ranges from white, grey, green, blue to black. The bill is black with varying amounts of yellow on the upper bill (maxilla).

The distinctive blue-throated form of Nicaragua, Costa Rica and western Panama has been separated as the Blue-throated Toucanet, Aulacorhynchus caeruleogularis – however, several resources still list them as subspecies of the Emerald Toucanets.

They typically occur in humid montane forests, along forest edges, second growth adjacent to forests, plantations and clearings with scattered trees at elevations from 2,000 – 10,000 feet (600 – 3,100 meters), favoring the higher altitudes. Only in Mexico and in southwestern Amazonia (southern Peru, western Brazil and northern Bolivia) do they occur in lowland evergreen forests down to 820 feet (250 meters).

Species taxonomy is somewhat controversial, seemingly ever changing and heavily discussed. However, most resources / authorities at this point in time appear to be agreeing on the below …

The below species are by some authorities considered separate species (particularly in recent history); although many resources continue to list them as subspecies: 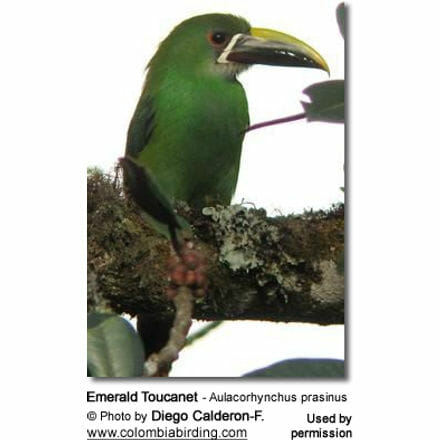 The Emerald Toucanets have a mainly emerald green plumage (for which they were named), except for a bronzy tinge on the crown and forecrown, a yellowy bronze tint on the upper back, a blue patch around each eye, and the chestnut or rufous-colored vent and tail-tip.

The bill is heavy and long; the upper bill (maxilla) is extensively yellow and the lower bill (mandible) is black. The amount of yellow varies between the different subspecies. The skin around the eyes (orbital skin) is black. The eyes are grey-brown to brown or chestnut.

The legs range in color from dull greyish to bright green.

Both female and male adults are alike in appearance, although females tend to be smaller and shorter-billed.

Juvenile Emerald Toucanets are duller (greyer, less yellow and the chestnut areas are browner), with a greyish throat and the black areas of the bill replaced with dusky. 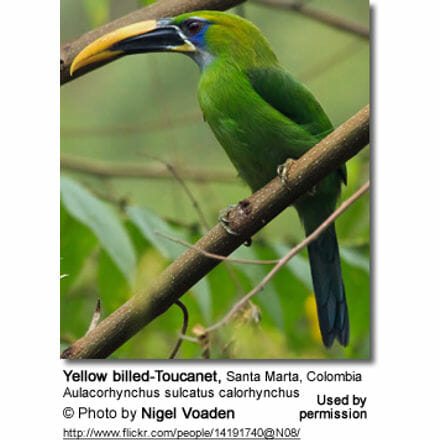 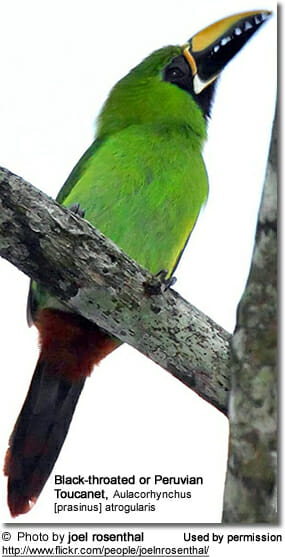 In Mexico, most breeding activities have been observed from March to July; in Costa Rica from March to August; and in Colombia from January to June.

The mating ritual is a fun-loving affair for toucans, as they throw fruit to one another. During courtship and the actual act of mating, both birds are observed feeding each other.

Like all of their other activities, nesting happens in hollow areas in trees, 6.6 – 89 feet (2 – 27 meters) above the ground. In most cases, they will take advantage of abandoned woodpecker nests or use other natural cavities. The bill is not effective for digging or any other type of extensive excavation work and so they must rely on holes already formed by other means.

The nests are not lined, but the 1 – 5 (average 3 – 4) glossy white eggs that are laid each year rest on a few wood chips created while enlarging the opening or on various kinds of regurgitated seeds collected for this purpose. Parents share equally in incubation duties, but rarely sit on the nest for more than an hour at a time and the eggs are often left uncovered. The incubation period lasts about 14 – 16 days to hatching. The hatchlings are completely helpless, blind and naked. Babies have pads on their elbows that protect their feet by keeping them elevated until they fledge. The bill is small and unremarkable until about 16 days old when it takes on the distinguishing features of the toucan, and requires up to four months to develop fully. Feathers begin to expand at 4 weeks. They fledge (leave the nest) when they are about 42 – 45 days old.

Both parents share in feeding fruit and animal prey to the chicks for up to 8 weeks.

Breeding in captivity requires an excellent knowledge of their requirements, and even then hatching rates are as low as 30%.

Emerald Toucanets are quite popular as pets due to their small size and quiet nature, which makes them suitable for apartment living (if allowed to roam around throughout a good part of the day). Hand-raised birds are typically also very affectionate and playful. In fact, they are said to be as cuddly as cockatoos, and are quite trainable as well.