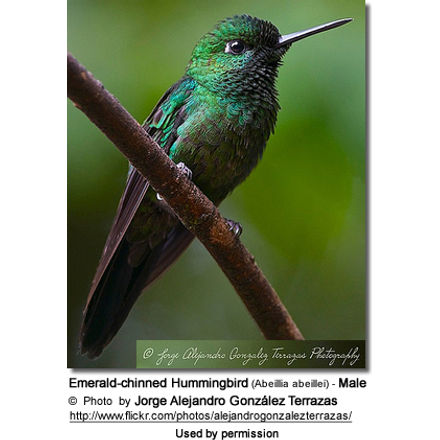 The Emerald-chinned Hummingbirds (Abeillia abeillei) – also known as Abeille’s Hummingbirds – are found in Central America, where they have a wide range. Unfortunately, the numbers of these hummingbirds are believed to be declining due to destruction of their forest habitats. 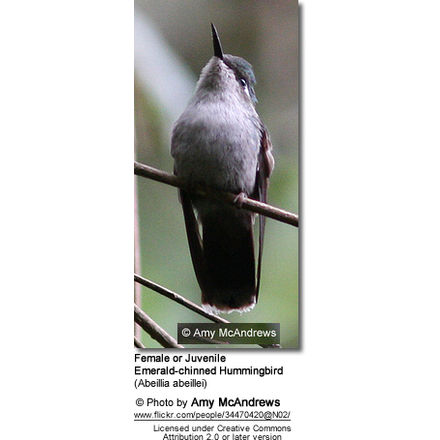 Emerald-chinned Hummingbird (aurea) (Abeillia abeillei aurea – Miller, W and Griscom, 1925) – validity of this race is sometimes questioned and this form may be merged with nominate race in the future

The back and the outer rectrices (the long flight feathers of the tail) are bright metallic bronze green or greenish bronze. The central tail feathers are blue and the rest of the tail is blackish with grey borders. The throat is emerald green. There is a white dot behind each eye.

Bill is short and black. 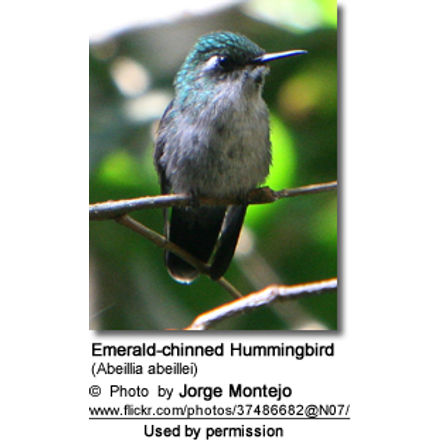 Females resemble males, except are greyer below.

Emerald-chinned Hummingbirds primarily feed on nectar taken from plants of the families Rubiaceae, Verbenaceae, and Oenotheraceae. They use their long, extendible, straw-like tongues to retrieve the nectar while hovering with their tails cocked upward as they are licking at the nectar up to 13 times per second. Sometimes they may be seen hanging on the flower while feeding.

As is typical of hummingbirds, the Emerald-chinned Hummingbirds are solitary in all aspects of life other than breeding; and the male’s only involvement in the reproductive process is the actual mating with the female. They neither live nor migrate in flocks; and there is no pair bond for this species.

Most breeding occurs between February and March. Several males perform in leks (communal courtship displays) that involve singing and flying in u-shaped pattern in front of any females in their territories.

The female is responsible for building the deep, cup-shaped nest out of plant fibers woven together and green moss on the outside for camouflage in a protected location in a shrub, bush or tree. She lines the nest with soft plant fibers, animal hair and feather down, and strengthens the structure with spider webbing and other sticky material, giving it an elastic quality to allow it to stretch to double its size as the chicks grow and need more room. The nest is typically found on a low, thin horizontal branch situated about 3.3 – 33 ft (1 – 3 meters) high in a tree.