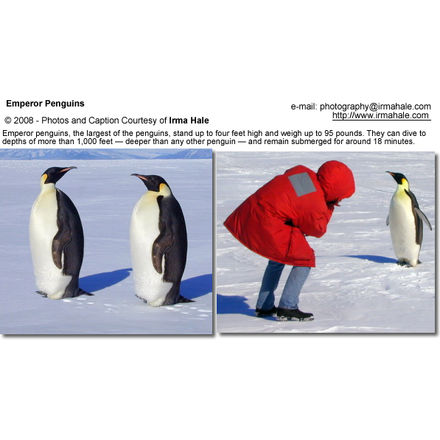 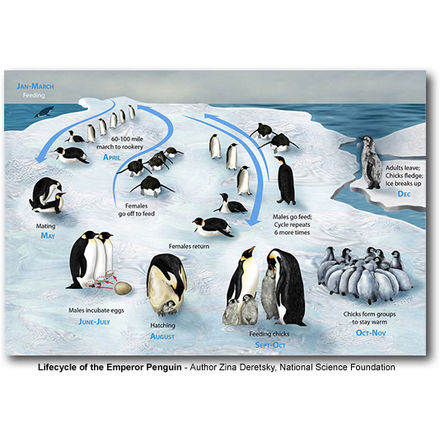 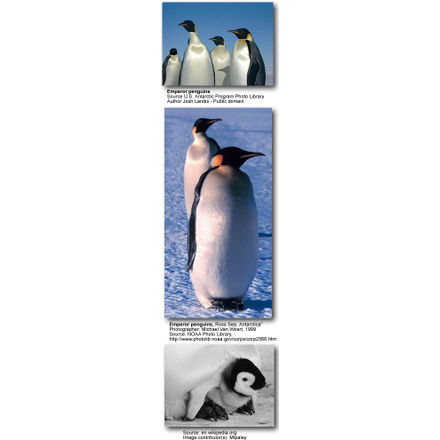 Adults average 1.15 m (45.3 in.) in length and weigh between 20 and 45 kg (44 to 99 lb), making this penguin the 5th heaviest existing bird.The largest known individual was about 46 kg (101 lb). The head and wings are black, the abdomen white, the back bluish-gray and the bill is purplish-pink. On the sides of the neck there are two golden circular stripes. As in the King Penguin, a male Emperor Penguin has an abdominal fold, the “brood pouch”, between its legs and lower abdomen.

The Emperor Penguin has a thick coat of feathers that insulate the entire body, excluding only the legs and the undersides of the wings. The feathers provide a waterproof layer around its body.

Emperor Penguin chicks are covered with a thick layer of light gray down. This covering ensures that they retain as much heat as possible, vital at this early stage when they have difficulty maintaining their body temperature. In addition, the infant Emperor Penguin’s orbital area is covered in white downy feathers, unlike the all-black feathered head of the adult.

Males and females can be distinguished by their call. Each call is distinct. They also are related to the King and the Chinstrap Penguin.

They normally dive to between 150 and 250 m (490 to 820 ft), although they can venture deeper, the deepest diving on record being 565 m (1870 ft). The longest they can hold their breath when underwater is 15 to 20 minutes. Their swimming speed is 6 to 9 km/h (4 to 6 mph), but they can achieve up to 19 km/h (12 mph) in short bursts. One of their feeding strategies is to dive to about 50 m (164 ft), where they can easily spot the sub-ice fish, Pagothenia borchgrevinki, swimming against the under surface of the sea-ice, which they then catch. They then dive again and repeat the sequence about half a dozen times before surfacing to breathe. They may also blow bubbles into the cracks in the ice to drive out the hiding fish.

On land they alternate between walking with a wobbling gait and sliding over the ice on their bellies, propelled by their feet and their flipper-like wings.

As a defense against the cold, Emperor Penguins stand in compact huddles (also known as the turtle formation) ranging in size between ten and many hundreds of birds, each leaning forward on a neighbor. Those on the outside tend to shuffle slowly around the edge of the turtle producing a slow churning action, giving each bird a turn on the inside and the outside.

Emperor Penguins first begin to breed at approximately five years of age. Emperor penguins travel about 90 km (56 mi) inland to reach the breeding site. The penguins start courtship in March or April, when the temperature can be as low as –40°C (–40°F). Emperor Penguins are serially monogamous. They have only one mate each year, and stay faithful to that mate. However, the next year, most end up with different mates. Although they attempt to locate the previous year’s mate in the next breeding season, most cannot find each other and choose a new mate.

In May or June, the female penguin lays one 450 gram (1 lb) egg, but at this point her nutritional reserves are exhausted and she must immediately return to the sea to feed. Very carefully, she transfers the egg to the male, who incubates the egg in his brood pouch for about 65 days consecutively without food by surviving on his fat reserves and spending the majority of the time sleeping to conserve energy. The transfer of the egg can be awkward and difficult, and many couples drop the egg in the process. When this happens, the chick inside is immediately lost as the egg cannot withstand the low temperatures on the icy ground. To survive the cold and winds of up to 200 km/h (120 mph), the males huddle together, taking turns in the middle of the huddle. They have also been observed with their backs to the wind to conserve body heat. If the chick hatches before the mother’s return, the father sets the chick on his feet and covers it with his pouch, feeding it a white, milky substance produced by a gland in his esophagus.

After about two months, the female returns. She finds her mate among the hundreds of fathers via his call and takes over caring for the chick, feeding it by regurgitating the food that she has stored in her stomach. The male then leaves to take his turn at sea. His trip is slightly shorter than before, because the melting of ice in the summer gradually decreases the distance between the breeding site and the open sea. After another few weeks, the male returns and both parents tend to the chick by keeping it off the ice and feeding it regurgitated food. About two months after the egg hatches, as the weather becomes milder, the chicks huddle in a crèche for warmth and protection, still fed by their parents.

Eventually, both the chick and parents return to the sea and spend the rest of the summer feeding there. At the end of the summer the whole inland trip is repeated for all those penguins of breeding age, while the younger ones stay at the sea edge.

The Emperor Penguin, along with nine other species of penguin, is currently being considered for placement under the Endangered Species Protection Act. The primary reasons for this are declining food availability due to the effects of climate change, and industrial fisheries on the crustacean and fish populations. Other reasons for their placement on this list include such things as disease, foreign and introduced predators (this is more so for the other species of penguin than it is the Emperor), habitat destruction, and disturbance at breeding colonies by humans. The ruling for this will be introduced by November of this year, with protection commencing one year after.