The Eurasian Hobby (Falco subbuteo), or just simply Hobby, is a small slim falcon. It belongs to a rather close-knit group of similar falcons often considered a subgenus Hypotriorchis. This species was first described by Linnaeus in his Systema naturae in 1758 as Falco subbuteo. This species breeds across Europe and Asia. It is a long-distance migrant, wintering in Africa.

It is a bird of open country such as farmland, taiga and savannah. They are widespread in lowlands with scattered small woods.

It is an elegant bird of prey, appearing sickle-like in flight with its long pointed wings and square tail.

Adults are slate-grey above, and streaked lengthwise below, with a white throat. Close views enable the red “trousers” and vent to be seen. Males and females look alike, but juveniles are generally much browner.

The Hobby has a distinct first-summer plumage. 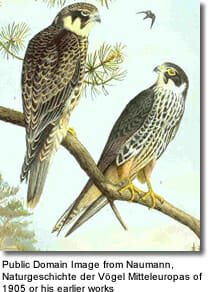 It will take large insects, such as dragonflies, which are transferred from talons to beak and eaten in flight. It also captures small birds in flight.

Its speed and aerobatic skills enable it to take swallows and even swifts on the wing, and Barn Swallows or House Martins have a characteristic “hobby” alarm call.

Hobbies nest in old nests of crows and other birds, laying 2-4 eggs.

A range of board games was also once going to be named “Hobby”, but the inventor, Peter Adolph, was refused permission by the Patent Office on the grounds that it was too generic. The inventor, who was also a birdwatcher, simply used the scientific name of the Hobby and called the board game Subbuteo.