The Eurasian Nuthatch (Sitta europaea) inhabits a large geographic range and is found in most temperate areas of Asia and Europe. Depending on the topography of the land, it will live in varying locations, sometimes as high as 2500 meters above sea level.

This species will dwell in both deciduous and mixed woodlands, often being seen to forage and nest in neighborhood gardens and city parks which contain large, mature trees. Although it spends most of the year in mixed woodlands, it prefers to breed in places with an abundance of coniferous trees. 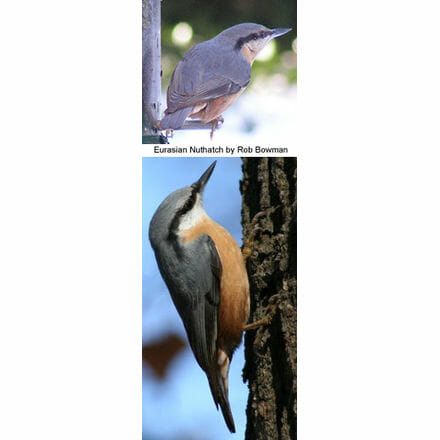 The European Nuthatch is a diminutive bird, weighing only 17-28 grams and measuring just 14 cm long. However, it has a longer lifespan—9 years—than most small birds.

In most of the species, the adult male’s upperparts, wings, and tail contain some variations of blue-grey. Its underparts are a rufous shade with a buff-white hue. The flight feathers are a dark grey-brown. Some subspecies have underparts that are buff with rufous flanks and vents, while other might have a white patch by the vent. The grey underwing coverts compliment the black primary coverts. Other features include dark yellow-brown, brown or dark grey legs and feet.

The head markings are striking. The forehead and crown are also blue-grey, and dark brown eyes peer out from above the sturdy, dark grey beak. There is a black eye stripe along the superciliary line, from the maxilla, through the eye and up to the nape sides. The underside of the neck is buff-white, and the cheeks and chin are white.

The female’s appearance is quite similar to the male’s, but her hues are not as bright as his. The immature European Nuthatch resembles the adult female, but its feather markings are duller.

The Eurasian Nuthatch’s breeding season takes place in April and May. During this time, the highly territorial pair is inseparable, utilizing constant contact calls and foraging in the same places. The male’s courtship includes displaying his spread tail feathers and fluffing his wings as they open to display the brightly colored plumage.

Rather than build its own nests, the Eurasian Nuthatch seeks a vacated woodpecker’s nest or a natural cavity in a tree in which to build its cup-shaped nest. The female lines the nest area with wood chips or bark, and if the entrance hole is more open than they would like, she packs mud around it to reduce its size. She may also use the mud to coat the interior of the nest for protection in inclement weather.

After the hen has spent as much as a month building the nest by herself, she retains ownership of it for several years. She will lay 5-9 white eggs; these have tiny rufous markings. She incubates the eggs for 13-18 days; after that she alone broods the chicks. Both male and female feed the babies during the 19-29 day nesting time. A week or two later they fledge. The pair generally produces only one brood per season, but sometimes she will lay a second clutch.

Just as other species of Nuthatch wedge their food into bark crevices, so does the Eurasian. They pound the seeds and insects into the crevice for later retrieval, using the weight of their tiny bodies to drive the food deep into the wood.

They too visit bird feeders; they can be quite aggressive while at the feeder, chasing other birds away.

The highly vocal Eurasian Nuthatch can be quite loud when calling. The calls range from a sudden “twit,” a few at a time, to several notes sung quickly. When excited, it can sing as many as 10 notes per second! Its alarm call is a shrill “sirrr,” and the contact call is given just before taking flight. It is composed of a slight “tsit” sound. The notes have a wide range of pitches, rising and falling, and are often repeated.