They are very common throughout their natural range, which stretches from northern temperate Europe into Russia; with a separate population in eastern Asia.

These siskins breed in Europe from northern Scandinavia, west and south through Great Britain, where they are resident from southern England to northern Scotland, but are most numerous in Scotland and Wales.

Their range stretches south through Europe to northern and central Spain, Corsica, northern and southern Italy and Balkans to northern Greece, and east from Baltic and eastern Poland through central parts of western Russia, north central Kazakhstan and western Siberia to the upper Ob River (occasionally to the Yenisey River), as well as south from Ukraine, western Caucasus and northwestern and northern Turkey east to northern Iran and Iraq. In Russia they also occur in the far east from the Baikal lake and Yablonovy mountains, east to Transbaikalia, the coast of the Sea of Okhotsk, central Kamchatka, Ussuriland, Sakhalin Island and northeastern China (northern Inner Mongolia and Heilongjiang). They also occur in northern Japan (central and eastern Hokkaido).

Siskins tend to seek out very different wintering localities each year, wintering wherever they expect good amounts of seed crops.

Outside the breeding season, they will often form large mixed feeding flocks – often together with Redpolls.

Their global population is estimated to be between 20 and 36 million. Even though they are quite common throughout most of their range, this species appears in Annex II of the Bern Convention on the Conservation of European Wildlife and Natural Habitat as a protected bird species. 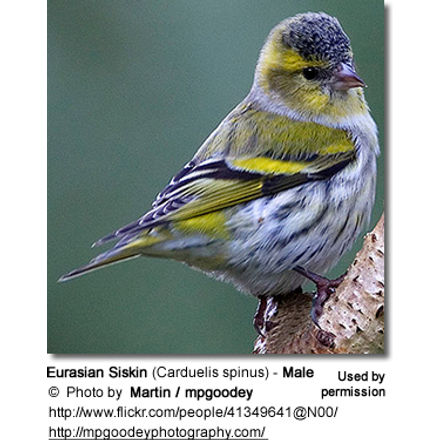 Males: The back is mostly greyish green. The face and rump are yellow. There is a black cap on the head; and a variable black bib (chin patch).The plumage below is yellow on the chest turning grey-streaked towards the vent. The black wings have a yellow wing bar, and the tail is black with yellow sides.

Female and juveniles have a more olive-colored plumage, a greyish green head and no cap. The center of the abdomen and lower chest are often largely or entirely unstreaked.

The strong and narrow bill is perfectly adapted for picking up the seeds on which they feed. The legs and feet are dark brown. The eyes are dark / black.

Their flight is similar to that of other finches – rapid and bounding. 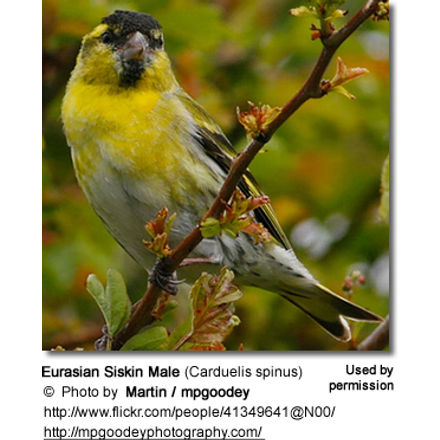 Pairs usually form during the winter before the breeding season and before migration.

Males will compete aggressively for females, performing courtship rituals that include making mating flights from tree to tree, plumping up the feathers on the head and rump to make themselves look bigger; extending their tails and singing to the desired females.

Most breeding activities occur in spring, from March to August.

Siskins form small nesting colonies of up to six pairs. The small, bowl-shaped nests are usually placed in hidden locations at the end of relatively high branches in trees, such as conifers, afirs, Scotch Pines and Corsican Pines (whatever is found in the range they are in). The nests of the different pairs are usually located close to each other. The nests are constructed out of small twigs, dried grasses, moss and lichen and lined with down.

The average clutch consists of 2 – 6 eggs that range in color from white to light grey or light blue with small brown spots. The eggs are incubated by the female alone for about 10 – 14 days. The first hatchlings occur in mid-April. The newly-hatched are relatively immobile, lack any down, are blind and completely depend on their parents for warmth, nutrition and protection. The young leave the nest when they are about 15 days old in a semi-feathered condition, and remain close to the nest for up to a month at which point, their plumage is complete and they are ready to disperse.

These finches are also popular with aviculturists for their pleasing appearance and nice songs. They are easy to care for and adapt well to life in captivity. However, they do not breed as well as in the wild.

They will readily interbreed with some other finches (such as canaries). Hybridization also occurs in the wild, sometimes as a result of escapes or releases of captive birds. 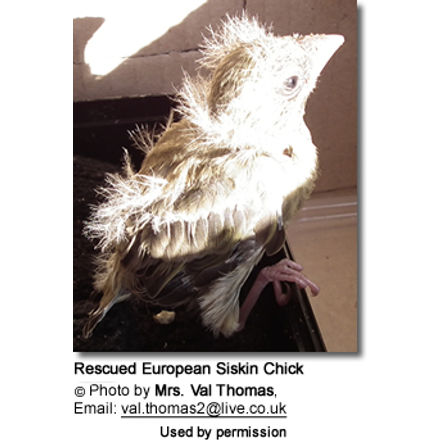 Story of the little siskin chick:

Valerie rescued the little siskin in Spain, which she found alone with its siblings lying dead nearby. The story is below:

“When we found her, lying on the ground, she was tiny with just a few feathers starting to grow and so weak she couldn’t even squeak, we didn’t think she would survive. I cuddled her gently in my hand under my jacket until we arrived home from our walk. It was a Bank Holiday and I didn’t know of any wild life santuary’s in the area to get help, and all the websites just said it was best to leave them as they would probably die anyway, which was no help at all.

I managed to drizzle a little soya milk, water and a crushed seed from my muesli, into its beak, with a small rolled up bit of kitchen paper towel. After a few attempts, her little beak moved a little and her body was moving as though she was trying to squeak, but there was no sound. After a few more attempts to feed, she started to open her beak slightly and take in a little food.

At night I put her into a small plastic dish lined with cotton wool, and my thermal wool gloves around her. I put this into a cardboard box lined with a towel, and a towel over the box to keep it warm and dark. I didn’t expect to see her alive in the morning, but she seemed a bit stronger and after a few feeding attempts, suddenly the little gape opened and she squeaked. From then on she went from strength to strength.

We managed to get her some wild bird food which had insects and assorted seeds, this I crushed with a little crushed fresh peanut and water, sometimes a little chopped egg, or the seeds from my muesli. She also liked orange, apple, and green beans. She sat on my finger and I’d take her to the window, where she became very good at catching the little fruit flies.

After a while she could fly a few feet onto the floor, then each day she flew further and become agile at landing in strange places. Whenever I brought the little dish with her food and little plastic feeder I’d made out of a margarine tub lid, she would tweet very loudly and would fly to me, for her feed.

We bought her a large cage, which she was very happy with, and she would quite happily return to it. I used to put the cage on the back patio wall, where she had a good view of all the other birds flying nearby, including siskins.

When the sun became to strong at the back, we put her onto the front patio table, where a White wagtail with a deformed foot regularly has a feed and has become quite tame.

But knowing we had to leave soon to return to UK, and she was so tame and trusting we felt she might not survive. Our neighbors said they would look after her for a while, which they did.

They released her last Saturday, when she seemed ready to join her kin in the wild, she was getting agitated in the cage and trying to fly towards the trees.

They didn’t see her again until today, I had an email to say she’d landed on the back patio wall where they’d left some food and drink, when they called her name “Tufty”, she put her head on one side and looked, then flew up onto the roof and around the house, before flying back to the trees on the Campo at the back of our houses. She is looking happy and well, so the story has a happy ending.” 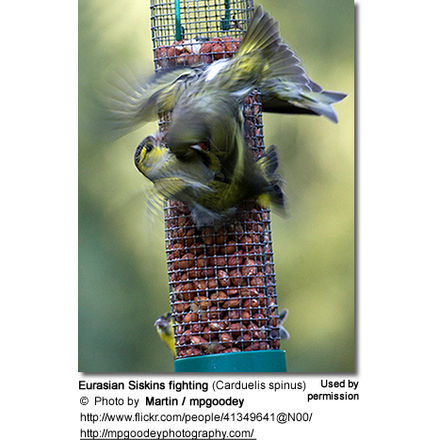 These acrobatic feeders are often observed in trees hanging upside-down as they try to reach food items. They are highly agile and adept at using their feet to bring hanging food into reach. They generally feed in trees, avoiding eating on the ground.

They also take insects (mainly beetles). In particular during the breeding season when raising chicks, the protein from insects is important to support the chick’s rapid growth.

Their strong calls are described descending or ascending “tilu” and “tluih”, as well as the occasional harsh rattling chirrup.

Their pleasing songs consist of long smooth and rapid twitters and trills. They sing throughout the year and often in groups

Captive birds can expect to live 11 – 14 years – provided they are well cared for and don’t become victims of accidents.

Wild individuals only live 2 – 3 years, mostly due to predation of their eggs, young and adults by reptiles (i.e., snakes), birds of prey and small mammals. They also succumb to harsh environmental conditions.