The Fiery-throated Hummingbird (Panterpe insignis) – also known as Irazu Hummingbird – is a common, medium-sized hummingbird that occurs naturally in in the mountains of Costa Rica and western Panama.

They are usually found in cloud forests at elevations of 1,400 m (4,600 feet) or above; as well as frequenting scrub at the woodland edges and clearings. 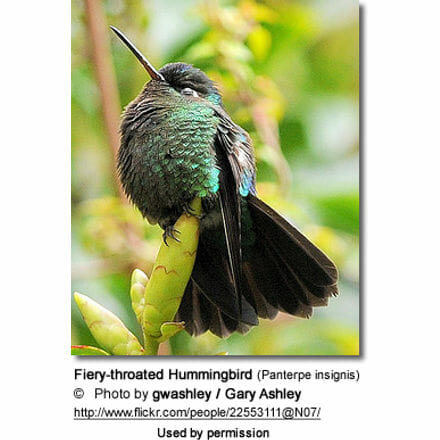 The Fiery-throated Hummingbird averages 11 cm or 4.3 inches in length and weighs about 5.7 g or 0.2 oz. It has a straight black bill and dusky-colored feet.

The adult Fiery-throated Hummingbird has iridescent green body plumage, a dark blue tail, and a white spot behind each eye. It has a brilliant blue crown, yellow-bordered coppery orange throat, and blue chest patch. Its sides and the back of the head are velvety black.

Both males and females look alike. Immature birds have rufous-colored fringes to their head feathers.

Hummingbirds are named after the humming sound made by the beat of their wings. Their wings make up to 100 beats per second, moving so rapidly that the naked eye cannot detect them. They are the only birds that can generate power on both the forward and backward wing strokes, which makes backward fly possible.

The female Fiery-throated Hummingbird is responsible for building the bulky cup-shaped nest out of plant fibers woven together and green moss on the outside for camouflage in a protected location, typically about 2 – 4 m high at the end of a descending bamboo stem or on a rootlet under a bank. She lines the nest with soft plant fibers, animal hair and feather down, and strengthens the structure with spider webbing and other sticky material, giving it an elastic quality to allow it to stretch to double its size as the chicks grow and need more room. The nest is typically found on a low, thin horizontal branch.

The average clutch consists of 2 white eggs, each being about the size of a coffee bean. The female alone incubates (broods) the eggs for about 15 – 19 days. During this time, the male continues to defend his territory and the flowers he feeds on. The female is also the only one that protects and feeds the chicks with regurgitated food (mostly insects since nectar is an insufficient source of protein for the growing chicks). As is the case with other hummingbirds, the chicks are only brooded for the first week or two. After about 12 days, the young are left alone even on cooler nights – probably due to the small nest size. The young leave the nest when they are about 20 – 26 days old. 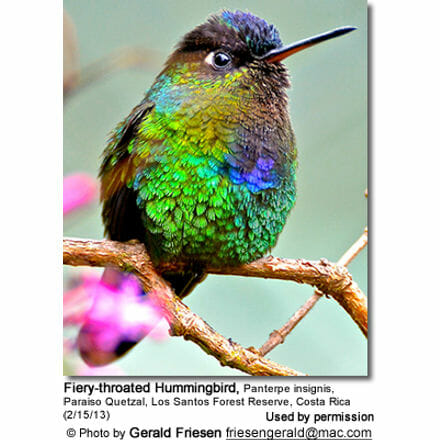 The Fiery-throated Hummingbirds primarily feed on nectar taken from a variety of brightly colored, scented small flowers of trees, herbs, shrubs and epiphytes, Ericaceae and bromeliads.

Males are fiercely territorial. Aerial battles between males are frequently observed and are usually very entertaining to the observer. Even though males will defend the flowers and scrubs in their feeding territories against other male hummingbirds; they usually tolerate females.

The call is a high-pitched twittering.