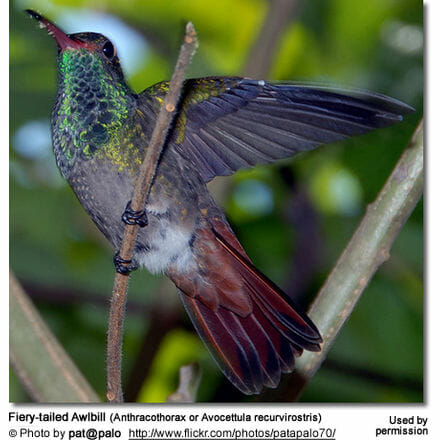 The Fiery-tailed Awlbills are found in southeastern Venezuela (Bolívar) and the adjacent French Guiana, Guyana and Suriname, and south to north-central Brazil (lower Amazon east to Maranhão and Piauí). A disjunct population is said to occur in eastern Ecuador (Napo Valley).

Their preferred habitats are open savannas, forest clearings and edges, near creeks and rivers. They are particularly common near granite outcrops.

The male has an overall dark, glossy green plumage with a bronze gloss on the upper plumage, a violet tail (except for the slightly forked central pair of feathers, which are green); dull black wings and upper wing coverts (feathers) with green edgings, and a black streak across the abdomen.

The female is green above and white below, with a contrasting black stripe across the chest and white tips to the long tail feathers.

They have peculiar upturned bills, differentiating them from other hummingbirds that have either straight or down-curved bills. Their legs are black.

The Fiery-tailed Awlbills resemble the Mango Hummingbirds (genus Anthracothorax), but can be identified by the distinctive sharp upturn at the tip of their bills. 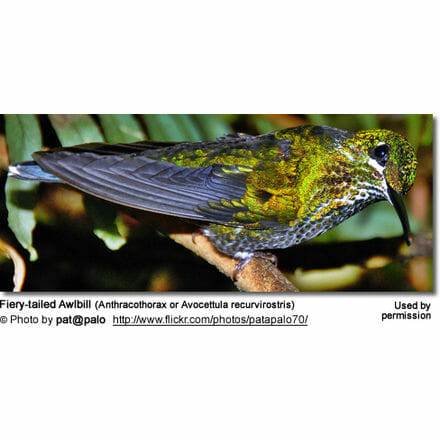 The Fiery-tailed Awlbill Hummingbirds primarily feed on nectar taken from a variety of brightly colored, scented small flowers of trees, herbs, shrubs and epiphytes, particularly Clusia and Dioclea. They favor flowers with the highest sugar content (often red-colored and tubular-shaped) and seek out, and aggressively protect, those areas containing flowers with high energy nectar.They use their long, extendible, straw-like tongues to retrieve the nectar while hovering with their tails cocked upward as they are licking at the nectar up to 13 times per second. Sometimes they may be seen hanging on the flower while feeding. They are often seen “*trap-lining” between favored plants (*traplining is a foraging strategy in which a bird visits a circuit of nectar sources, much as trappers check their lines of traps). Fiery-tailed Hummingbirds usually forage about 3.3 – 10 feet (1 – 3 meters) off the ground.

The female is responsible for building the cup-shaped nest out of plant fibers woven together and green moss on the outside for camouflage in a protected location in a shrub, bush or tree. She lines the nest with soft plant fibers, animal hair and feather down, and strengthens the structure with spider webbing and other sticky material, giving it an elastic quality to allow it to stretch to double its size as the chicks grow and need more room. The nest is typically found on a thick branch of thick shrub or tree about 16.5 – 40 feet (5 – 12 meters) above the ground.

The average clutch consists of 1 -3 white eggs (mostly 2), which she incubates alone, while the male defends his territory and the flowers he feeds on. The young are born blind, immobile and without any down.