Their large bills remind us of the beaks of seed-eating finches, except larger – hence their common name “Finch-billed Mynas.” The name “Grosbeak” is derived from the French word “gros-bec,” meaning “big beak.”

Finch-billed Mynas occur naturally on the island of Sulawesi (situated between Borneo and the Maluku Islands) and nearby islands of Bangka, Lembeh, Togian, Buton and Banggai (Peleng, Banggai).

Their preferred habitats are tropical lowland areas and to a lesser extent subtropical montane or lightly wooded areas and wetlands. 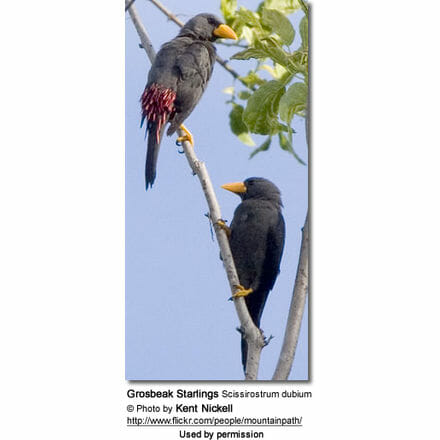 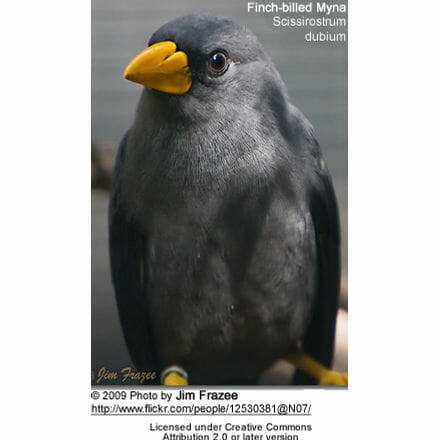 Finch-billed Mynas breed colonially together with as many or more than 100 pairs. All activities (courtship, mating, egg laying and raising of the young) appear to be synchronized – so that all the juveniles seem to be close to the same age.

They nest in colonies, which frequently contain hundreds of pairs. In 1940, Erwin Stresemann – a German ornithologist – described such a colony “as being reminiscent of a beehive, with continuous bustling activity.”

The courtship display involves the male approaching the female, making a long series of chuckling notes with his throat feathers extended.

Their tear-drop shaped nests are bored into rotting or dying tree trunks in woodpecker style and are usually situated 33 feet+ (10 meters) off the ground, extending to the top of the trunk.

Each nest is lined with dry grasses and leaves, occasionally with some green leaves added.

The average clutch consists of 2 eggs laid about 24 hours apart. An egg usually measures about 0.9 – 1 inches (24 – 26 mm) in diameter. They are pale blue with fawn and brown speckles or reddish-brown patches concentrated at the broad end.

Both parents share the incubation of the eggs for 13 – 14 days, and jointly raise the young. Most of the time, only one nestling survives to fledging. The chicks fledge when they are about 21 – 23 days old.

Grosbeak Starlings are highly vocal, and are easily heard as they forage in flocks or go about their activities at their breeding colonies.