The Firecrest Kinglet (Regulus goodfellowi) – also known as the Taiwan Flamecrest, Taiwan Firecrest Kinglet or Formosan Fire or Goldcrest – is endemic to the mountains of the island of Taiwan, off the coast of China, where it is a common resident.

These active, lively songbirds spend much of their day fluttering from tree to tree in the evergreen forest canopies, either alone or in small groupings. The flocks remain with their own species. 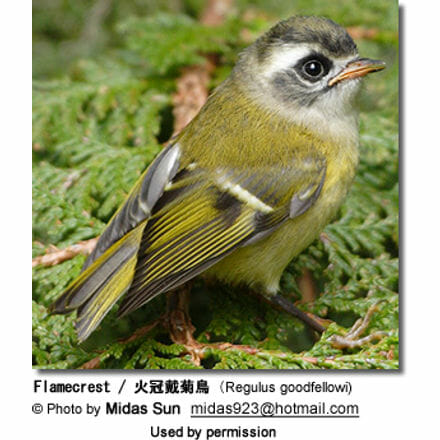 The Taiwan Firecrest is a tiny perching bird, only 9 cm (3.6 in) in length and 7 grams in weight, making it is the smallest of all Taiwan’s endemic bird species. Its plumage is the most vibrant in its family.

The male’s crown is black with a bright orange coronal stripe in the center which he erects when he becomes excited. The female’s crest is similar to the male’s, but her center patch is yellow instead of orange. The brown eyes are surrounded by black eye patches, and around those is a line of white feathers from the lore to the back of the eye. These white feathers extend from the lore up the forehead and across the very broad supercillium (the line of feathers above the eye).Below the eye there is a fine black malar stripe (between the eye and the throat). The throat and sides of the neck are grey, and the tiny, pointed beak is black.

Its mantle and back are green, while the rump and flanks are yellow-green. Yellow hues ornament the breast, sides and ventral areas. The wings and tail are grey/black, and the edges of the wing feathers are embellished in shades of yellow. The wing is adorned with a single white bar, and above the bar the plumage is a darker yellow-grey. Below the bar, the feathers are striped with yellow and grey. The bird perches on dark grey legs.

The Firecrest Kinglet is for the most part an insectivore, feeding primarily on insects, their larvae and eggs. He explores the tops and undersides of the branches and leaves of the trees and shrubbery in the coniferous forests. From time to time they will consume weeds and berries as well. The Firecrest will also rummage around on the ground, flitting about the foliage in search of prey.

Their breeding biology is poorly known. One must assume it is similar to the other species of Kinglets.

Firecrests have fine, shrill, high-pitched calls; the songs consist of a series of high notes—zi zi yi. The chattering and calling can be easily heard at close range, but the voice is soft and cannot be perceived at a distance. Most of the time, the birds vocalize while foraging from high in the trees under the cover of the tree canopy.