The Fish Crow (Corvus ossifragus) is superficially very similar to the American Crow but is smaller (36–41 cm in length) and has a more silky smooth plumage by comparison.

The differences are often only really apparent between the two species when side by side or, when heard calling. The bill is usually somewhat slimmer than the American Crow also but again, this may not help much when there is no other bird for comparison. 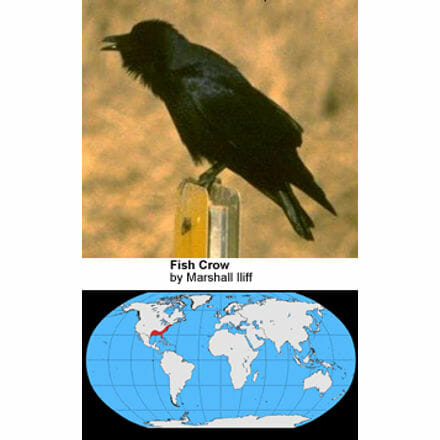 This species occurs on the eastern seaboard of the United States from the state of Rhode Island south to the northern part of the Gulf of Mexico and follows many river systems inland for quite some distance. Coastal marshes and beaches are frequented, also rivers, inland lakes and marshes, river banks, and the land immediately surrounding all.

Food is taken mainly from the ground and even in shallow water where the bird will hover and pluck food items out of the water with its feet. Small crustaceans such as crabs, shrimps, other invertebrates, stranded fish and live fish if the situation favors their capture, eggs and nestlings, small reptiles and fruits of many trees, peanuts and grains, human scraps where available.

The nest is usually built high in a tree and is often accompanied in nearby trees with other nests of the same species forming small, loose colonies. There are usually 4-5 eggs laid.

The voice is the most outwardly differing characteristic for this species and other American Crow species. Describes as a nasal and hoarse “ark-ark-ark” including a begging “waw-waw”.

Visual differentiation from the American crow is extremely difficult and often innacurrate — nonetheless, differences apart from size do exist. Fish crows tend to have more slender bills and feet.

There may also be a small sharp hook at the end of the upper bill. Fish crows also appear as if they have shorter legs when walking. More dramatically, when calling, fish crows tend to hunch and fluff their throat feathers.

This species appears to be somewhat more resistant to West Nile Virus than the American crow. Survival rates of up to 45% have been reported for fish crows, compared with near zero for the American species.