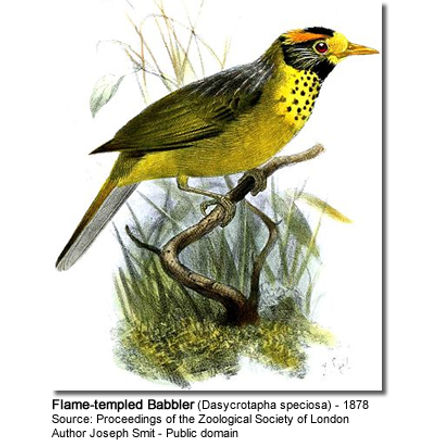 This species is threatened by habitat destruction.

The Flame-templed Babblers are only found on the islands of Panay and Negros in west central Philippines. The populations on these two islands differ sufficiently to potentially warrant recognition of two races in the future.

Within their range, they are believed to be sedentary (non-migratory).

They used to be fairly common and widespread, but now occupy only a small and highly fragmented range that is limited by suitable habitat. Their numbers are declining and they qualify as endangered because of their very small and severely fragmented habitat that is at risk of being converted for other uses.

They inhabit dense undergrowth and understorey of lowland forests, normally below 3,300 feet (~ 1,000 meters). However, it is possible that they occur above that elevation in areas with suitable habitat.

They usually remain in deep cover and are heard before they are seen.

These small birds measure about 6.3 inches (16 centimeters) in length, including their tails. Their wings are short and rounded.

The plumage is patterned yellow, black, orange and white. They were named for the fiery-orange tufts above the eyes. The back, rump, upperwings and tail are mostly olive-green ranging to grey with white streaks. The throat and chest are dull yellow with large black spots.

They have black ear coverts (feathers covering the ears) with fine, white streaks. The rest of the neck and the top of the crown are black.

Juveniles are duller plumaged version of the adults.

Little is known about their breeding habits; however, as far as the timing of the breeding season is concerned, it appears to be highly variable, with some birds found to be in breeding condition in December and others from April through to August.

Flame-templed Babblers feed on insects found close to the ground, in understorey bushes and trees, or in dense growths of vines and ferns on larger trees.

They usually move around slowly looking for prey amongst clumps of leaves.

These sociable birds are usually found foraging in mixed-species feeding flocks, together with fantails, leaf-warblers and tailorbirds.

Their musical calls are comprised of short warbled phrases.