The Flesh-footed Shearwater, Puffinus carneipes,is a small shearwater has a black plumage, pale pinkish feet, and a pale bill with a black tip. 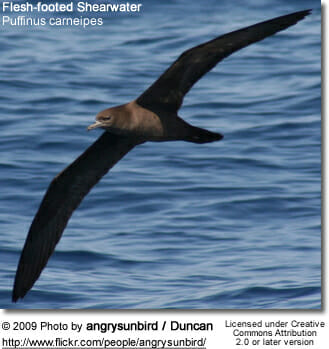 It breeds in colonies and has two main breeding areas:

It occurs as a summer visitor in the North Pacific Ocean as far north as British Columbia. They have also been sighted in the Central-North Pacific, above the main Hawaiian Islands.