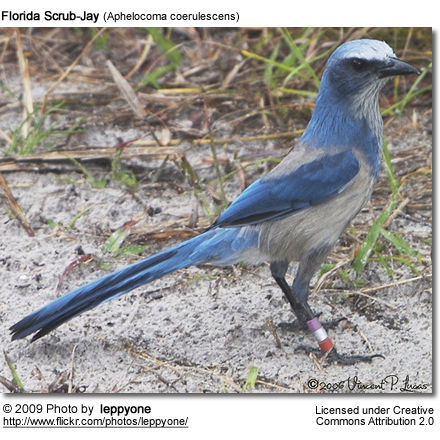 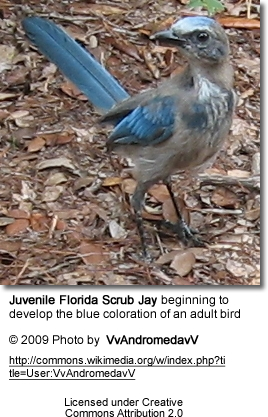 These blue and grey colored birds are restricted to central Florida, where they inhabit rare oak scrub and scrubby flatwoods on sand dunes.

Florida Scrub jays maintain feeding and nesting territories. The appropriate territory for each pair is about 22 – 25 acres (9 – 10 hectares), but due to lack of suitable habitat, some territories are now as small as 12 acres (5 hectares). The smaller territories won’t allow the resources to support larger family groups. Smaller groups reduce the number of nest helpers and makes them more vulnerable to predation and territorial attacks.

The loss of suitable habitat is mostly a result of urban development in combination with uncontrolled growth of vegetation, specifically the gradual replacement of their scrub habitat by large oaks and trees. The solution to the latter is periodic burning of scrub tracts to maintain the desired shrub height, canopy closure and patches of open sand. This conservation method that has been practiced in recent years.

In 1993, it was estimated that 4,000 breeding pairs were in existence. Studies conducted since noted declines of about 33% since the 1993 census. Now the global population is believed to range between 6,000 – 9,000 birds. (Ref. BirdLife Int’l – birdlife.org). They are now classified as Threatened under the Endangered Species Act.

A case is being made to replace the current official state bird of Florida – the Northern Mockingbird – with the Florida Scrub Jay (the only species of bird endemic to Florida). These birds are heavily sought by birders who come from afar for an opportunity to observe them and, therefore, hold considerable economic importance. 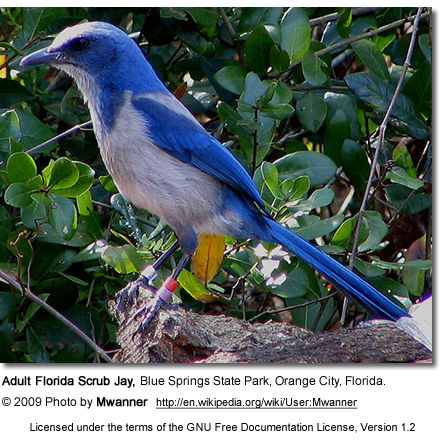 They are believed to only have survived in Flagler, Marion and Citrus counties south to Collier, Glades and Palm Beach Counties, and are most common at the following locations:

Florida Scrub Jays used to be quite common in the Buck Lake area of northwestern Brevard County (one of the favorite birding locations in Brevard County), and Brevard Zoo has released back into this preserve a couple of breeding pairs, which are monitored by the zoo (Ref. Tracy Frampton, Conservation Coordinator, Brevard Zoo – 2013). 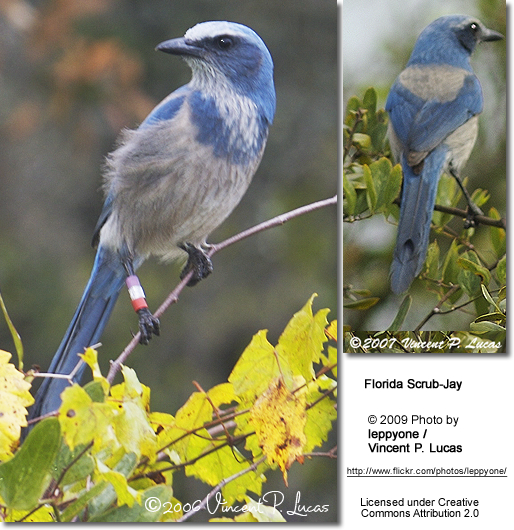 Head and neck are dusky brown, turning brown on the back. Otherwise looks like adult.

The Florida Scrub Jay is restricted to central Florida – which is far out of the range of other scrub jays. The only other, larger, long-tailed blue birds they could be confused with is the Blue Jay. But the latter can easily be identified by the head chest and white patches on the wings and tail.

Florida Scrub Jays have a varied diet that consists of:

During the summer, the percentage of animal foods will increase, and in autumn or winter, they will more heavily rely on plant foods, including hidden acorns or other nuts.

The Florida Scrub Jays are the premier disperser for a variety of oak trees since some of the acorns and nuts germinate in the ground and grow into trees. 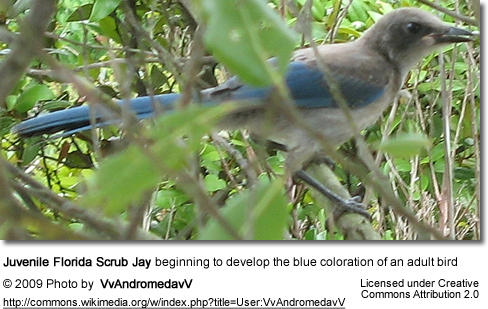 Most nesting occurs from early March to late June. The breeding pair will build a new nest each season. The open, shallow cup nest is constructed out of twigs and lined with palmetto fibers or rootlets. The nest is typically placed in dense shrub about 3 – 6 feet (~1 – 2 meters) from the ground. The outer dimensions of the nest may range from 7 – 7.8 inches (18 – 20 cm) and the inner dimensions from 9 – 10 cm (3.5 – 3.10 inches).

A clutch may consist of 1 to 5 greenish eggs with brownish spots, but the average is 3 – 4 eggs.

The female alone incubates the eggs for 17 – 18 days. The male will guard the nest and bring food to the brooding female.

The hatchlings are naked and helpless. They will be fed and guarded by the parents and the nest helpers.

Females emit distinctive “hiccup” calls when interacting with other individuals.

Some differences in vocalizations have been noted in jays found on the Atlantic Coast, in central Florida and southwestern Florida – even though they are separated by less than 100 miles.