The Forest Kingfisher (Todiramphus macleayii) – also known as the Macleay’s or Blue Kingfisher – are found in Indonesia, New Guinea and coastal eastern and northern Australia.

The Forest Kingfishers inhabit the coastal forests bordering the rivers and mangroves of Indonesia, New Guinea and coastal Eastern and Northern Australia. They can also be found in Papua New Guinea and the Solomon Islands.

In Australia, they occur on or near the Australian Coastline from Port Stephens in New South Wales, northwards to Cape York, and westwards across the Top End.

During the summer, they can be found in the southern parts of their range – in New South Wales and southern Queensland.

Those occurring in other countries are permanent residents.

The wings, tail and head are a sparkling blue. It has a white breast, abdomen and nape and a white patch in front of the eyes. There is also a black band stretching from the bill, through the eyes and ending at the ear coverts. A white patch can be seen on the wings when the bird is in flight.

The iris is dark brown and the legs and feet dark grey.

Juveniles have a duller plumage with a blackish crown.

The Forest Kingfisher’s appearance is similar to the Sacred Kingfisher’s; unlike the Sacred, however, the Forest displays a white “flash” on its wing and a brighter underbelly. 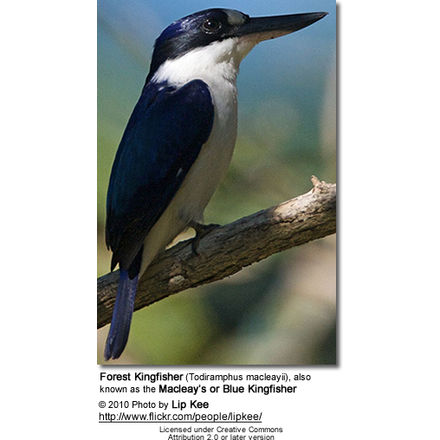 The Forest Kingfishers capture their prey by pouncing on them from a low perch.

They hunt mainly insects and invertebrates, such as bugs, beetles, grasshoppers, spiders, and worms, but will also seek out small frogs and lizards.

They kill their prey by striking them against branches or other hard surfaces.

The Forest Kingfisher will raise one clutch during its breeding season, from October to January in Australia.

The nest is a short burrow leading to a round chamber within an arboreal termite nest, and is built 10–12 m (30–40 ft) above the ground.

Chicks will be cared for by the parents for 30 days before leaving the nest .

The call is a shrill t-reek, repeated at regular intervals and heard most often in the early morning.