The Formosan Blue Magpie (Urocissa caerulea), also called the Taiwan Magpie (traditional Chinese: 臺灣藍鵲; pinyin: Táiwān lán què) or the “long-tailed mountain lady” (traditional Chinese: 長尾山娘; pinyin: Chángwěi shānniáng; Taiwanese: Tn̂g-boé soaⁿ-niû), is a member of the Crow family. It is an endemic species living in the mountains of Taiwan at elevations of 300 to 1200m.

In 2007 National Bird Voting Campaign held by Taiwan International Birding Association, there were over 1 million votes cast from 53 countries. Formosan Blue Magpie defeated Mikado Pheasant and was chosen as Taiwan’s national bird, though it has yet to be formally accepted.

The colors of male and female look alike. Its head, neck and breast are black; eyes are iridescent yellow; bill and legs are red; the rest of the plumage on the bird is a rich dark blue to purple in color. It also has white markings on the wings and the tail.

The Formosan Blue Magpie is unafraid of people. Their traces can be found in proximity to human residences in the mountains or newly cultivated lands. They are gregarious and are usually found in groups of six or more, gliding and shuttling in the woods. When flying in a group, the birds tailgate each other. Sometimes they may be seen strung out as if in line.

Similar to other members of the crow family, they have a raucous call which is described as a high pitched cackling chatter, “kyak-kyak-kyak-kyak”, and they are well known scavengers and omnivores. Their diets include snakes, rodents, small insects, plants, fruits, and seeds.

Wild figs and papayas are their favorites. They are known to store leftovers on the ground and cover them with leaves for future retrievals. Sometimes they store foods in the leaves or branches. 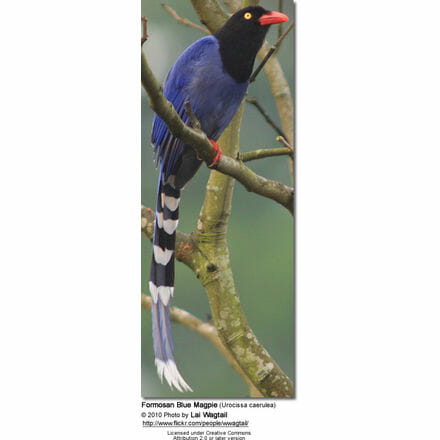 Females hatch eggs while males help out with nest building and feeding.

Their nests are usually found in the woods and weeds rendezvous areas and are mostly built on higher branches from March to April. The nest shapes like a bowl and is weaved with tweaks and weeds.

Usually you can find 3-8 eggs in a nest. Eggs have olive green color, with dark brown marks. Hatching takes 17–19 days and the successful rate is 78.3%. This will yield 3-7 chicks per nest.

Blue magpies have a strong nest defense behavior. They will attack intruders mercilessly until they retreat.

The IUCN Red List of Threatened Species has currently assessed the species to be of Least Concern as it is common throughout its range. Due to its endemism, however, the Formosan Blue Magpie has been listed as a rare and valuable species (珍貴稀有保育類) and protected by Taiwan’s Cultural Heritage Preservation Act (Traditional Chinese: 文化資產保存法) since 1989.

There is a small population of Red-billed Blue Magpies that have been introduced to Wuling Farm in Taichung County. In 2007, three hybrids were found in Taichung, which has caused some concern to conservationists, who fear the Formosan Magpie could be threatened in a similar way to the Taiwan Hwamei.

However, the Endemic Species Research Institute of Taiwan has been working to control Red-Billed Magpie populations by capturing individual birds and relocating their nests.