The Gadwall (Anas strepera) is a common and widespread duck of the family Anatidae.

The Gadwall is one of the species to which the Agreement on the Conservation of African-Eurasian Migratory Waterbirds (AEWA) applies.

The breeding male is a beautifully patterned grey, with a black rear end and a brilliant white speculum (= distinctive wing patch) , obvious in flight or at rest. In non-breeding (eclipse) plumage, the drake looks more like the female.

The females are light brown, with plumage much like a female Mallard. They can be distinguished from that species by the dark orange-edged bill, smaller size, and lack of an obvious speculum. 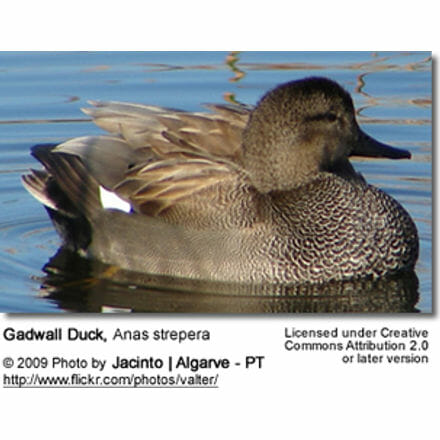 The Gadwall breeds in the northern areas of Europe and Asia and central North America. The range of this bird appears to be expanding into eastern North America.

This dabbling duck is strongly migratory and winters further south than its breeding range.

In Great Britain the Gadwall is a scarce breeding bird and winter visitor, though it has increased in recent years. It is likely that its expansion was partly through introduction, mainly to England, and partly colonisation Great Britain, with continental birds staying to breed in Scotland.

The Gadwall is a bird of open wetlands, such as prairie or steppe lakes, wet grassland or marshes with dense fringing vegetation, and usually feeds by dabbling for plant food with head submerged. 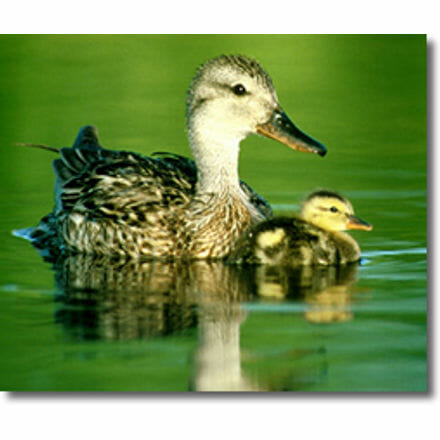 It nests on the ground, often some distance from water. It is not as gregarious as some dabbling ducks outside the breeding season and tends to form only small flocks.

This is a fairly quiet species; the male has a hoarse whistling call, and the female has a Mallard-like quack.