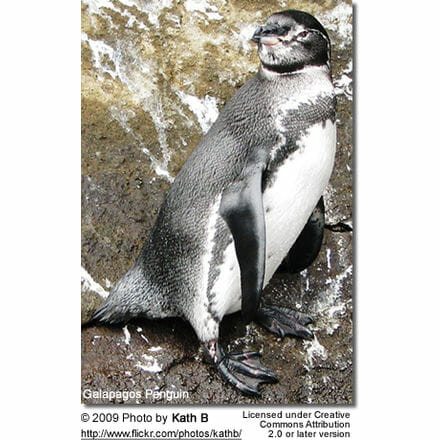 The GalÃ¡pagos Penguin (Spheniscus mendiculus) is a penguin endemic to the GalÃ¡pagos Islands. It is the only penguin to live on the equator and can survive due to the cool temperatures resulting from the Humboldt Current (= an ocean current that flows north-westward along the west coast of South America) and cool waters from great depths brought up by the Cromwell Current (= an ocean current that is, in effect, a river flowing under the surface of an ocean).

These penguins stay in the archipelago. They stay by the Cromwell Current during the day since it is cooler and return to the land at night.

Its nearest relatives are the African Penguin, the Magellanic Penguin and the Humboldt Penguin. The GalÃ¡pagos Penguin occurs primarily on Fernandina Island and the west coast of Isabela Island, but small populations are scattered on other islands in the GalÃ¡pagos archipelago.

The Galapagos Penguin is one of the smallest penguins. It is the only penguin to cross the Northern Hemisphere which means they live farther north than any other warm weather penguin. 90% of the Galapagos Penguins live among the western islands of Fernandina and Isabela, but they can also be seen on Santiago, Bartolome, northern Santa Cruz, and Floreana. 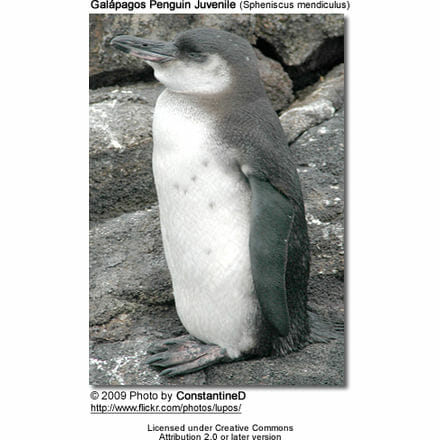 They have a black head with a white border running from behind the eye, around the black ear-coverts and chin, to join on the throat. They have blackish-grey upperparts and whitish underparts, with two black bands across the breast, the lower band extending down the flanks to the thigh.

Juveniles differ in having a wholly dark head, greyer on side and chin, and no breast-band.

The female penguins are smaller than the males, but they are still a lot alike.

They eat small schooling fish, mainly mullet, sardines, and sometimes crustaceans. They only go search for food during the day and normally within a few kilometers of their breeding site. They depend on the cold nutrient-rich currents to bring them food.

The Galapagos Penguins breed as many as three times a year, since they don€™t have a specified breeding season. Because of this, they are able to choose when to breed, and they ultimately decide this depending on food supplies. Before they breed, the penguins molt, and they may do this twice a year. While the birds are molting, they usually stay out of the water. They are able to go to the sea for food rather than starve though since the water is so warm in their area. Since they molt right before breeding, they are sure that they will not starve during the molting process. Granted, that may mean that there is not enough food during the breeding season, but the survival of the adult penguins is more important than the younger ones since they are the ones that make sure the species does not go extinct. 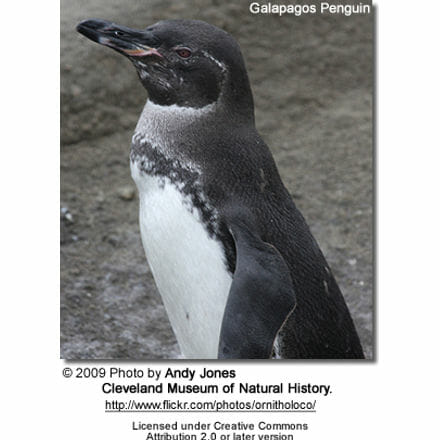 Because of the Galapagos Penguin€™s smaller size, it has many predators. On land, the penguins must keep an eye out for crabs, snakes, owls, and hawks, while in the water they must avoid sharks, fur seals, and sea lions. They face many hazards due to humans, as well as the hazards of unreliable food resources and volcanic activity. Illegal fishermen interrupt the penguins€™ nesting area by knocking down mangrove trees, and they are often caught in fishing nets by mistake. Much balance has to take place to ensure that the Galapagos Penguins do not become extinct.

Most nests are seen between May and January. The nests are made within 50 meters (164 ft) of the water on the shore. Adults stay near the breeding area during the year with their mate that they have chosen for life. When the penguins are breeding, incubation takes 38-40 days with both parents helping out. After thirty days of the chicks being born and both parents sharing responsibility of taking care of them, the chicks have feathers that are brown above and white below. The purpose of this is to protect the chicks from the strong sun more so than keeping them warm. The GalÃ¡pagos Penguin mates for life. It lays one or two eggs in places such as caves and crevices, protected from direct sunlight, which can lead to the eggs overheating. One parent will always stay with the eggs or chicks while the other is absent for several days to feed. The parents usually only rear up one child. If there is not enough food available, the nest may be abandoned. 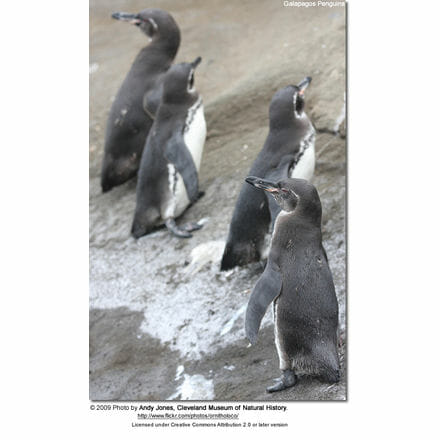 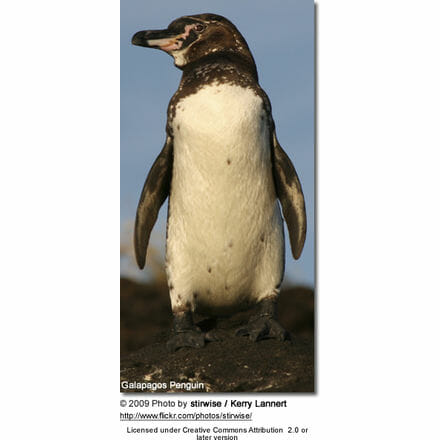 The temperature at the islands stays between 15-28 degrees Celsius (59-82°F). During the El NiÃ±o seasons, the penguins put off breeding since the food becomes short from the effects of El NiÃ±o. They would rather put off breeding than risk the adults dying off since that would wipe out the population even more.

They usually breed when the sea surface temperature is below 24 degrees Celsius (75°F) which results in more food for them. The strong sun is the main problem for the penguins in the Galapagos Islands. The main way they cool off is by going into the water, but they have had many behavioral adaptations because of all the time they spend on land in the warm weather.

There are two ways that help cool the penguin in the warmer weather on land. One is by stretching out their flippers and hunching forward to keep the sun from shining on their feet since they can lose heat from their flippers due to the blood flow there. They also pant because they can cool off from the evaporation from the throat and airways.

The species is endangered, with an estimated population size of around 1,500 individuals in 2004, according to a survey by the Charles Darwin Research Station. The population underwent an alarming decline of over 70% in the 1980s, but is slowly recovering. It is therefore the rarest penguin species (a status which is often falsely attributed to the Yellow-eyed penguin).

Population levels are influenced by the effects of the El NiÃ±o Southern Oscillation, which reduces the availability of shoaling fish, leading to low reproduction or starvation. However, anthropogenic factors (e.g. oil pollution, fishing by-catch and competition) may be adding to the ongoing demise of this species.

On Isabela Island, the introduced cats, dogs and rats attack penguins and destroy their nests. When in the water, they are preyed upon by sharks, fur seals, and sea lions. 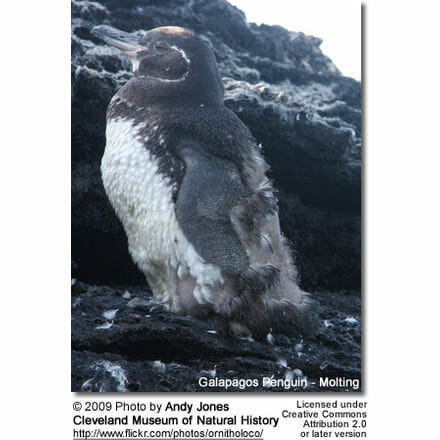 Copyright: Wikipedia. This article is licensed under the GNU Free Documentation License. It uses material from Wikipedia.org 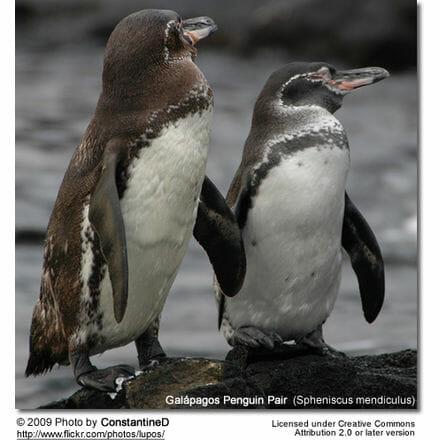 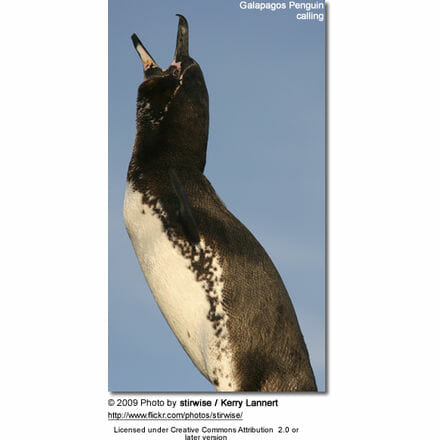