The Garganey (Anas querquedula) breeds in Europe and western Asia and migrates in large flocks south to winter in Africa.

Within their breeding range, they inhabit grassland areas that are close to shallow marshes and steppe lakes. 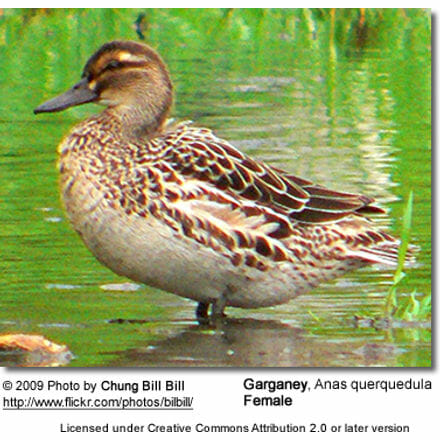 The adult male has a mostly grey plumage, except for the brown head and chest with a broad white crescent over the eyes. The bill and legs are also grey. In flight, a pale blue speculum (= distinctive wing patch) can be seen.

The male can’t be confused with any other ducks. However, the female resembles the female Common Teal. She can be identified by her stronger face markings and more frequent head-shaking when dabbling.

She could also be confused with the female Blue-winged Teal – but the latter has yellow legs.

The male’s mating call has been described as a distinctive crackling call. The female is mostly silent, but occasionally a feeble “quack” can be heard.

Ducks usually feed by dabbling, upending (feeding upside down in water) or grazing on land. It may submerge its head and on occasion even dive to reach food.

In the breeding season it eats mainly aquatic invertebrates, such as crustaceans, insects and their larvae, mollusks and worms. In winter, it shifts to a largely granivorous diet, feeding on seeds of aquatic plants and grasses, including sedges and grains.

Diurnal throughout the breeding season, in winter they are often crepuscular or even nocturnal feeders.