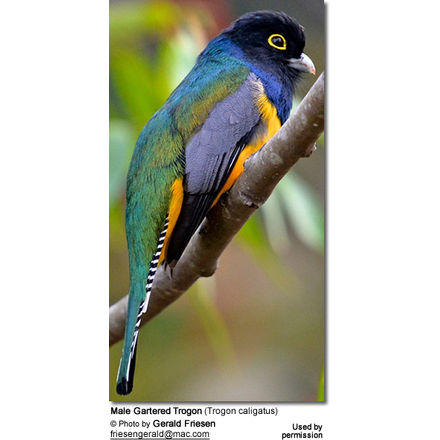 The Gartered Trogons (Trogon caligatus) were previously considered a subspecies of the South American Violaceous Trogon (Trogon violaceus); hence they were commonly referred to as the Northern Violaceous Trogons. However, they have been separated based on genetic and vocalization data.

These trogons demonstrate a strange behavior that is commonly referred to as “anting.” This involves carving into ant nests and allowing ants to release formic acid on their bodies. The reason for this strange behavior may be the control of feather parasites, such as feather mites, or to combat fungi or bacteria. This being said, some believe that it might be quite possible that these birds gain some pleasure from this activity.

Gartered Trogons occur naturally in the forests of east-central Mexico – from San Luis Potosi, Puebla, Veracruz and Oaxaca; south along both slopes of Central America (including Yucatan) into northwestern South America, where they are found west or north of the Andes in northern Colombia, east to  the Maracaibo basin in Venezuela and west and south to  western Ecuador and northwestern Peru.

They are most commonly associated with various forest types (tropical evergreen, deciduous and savanna), but are also spotted along the forest edge, in plantations, mangroves or clearings with scattered trees – from sea level up to about 6,000 feet (~ 1,800 meters).

Three races have been identified that vary in size and the ratio of black to purple on the head.

Male: Deep, shiny, violet-blue head and neck; bright green back with a blue hue towards the rump; green scapulars (“shoulders”) and upper tail feathers. Blackish wings with some white, wavy lines; royal blue throat; orange yellow chest and belly. The undertail feathers have even black and white horizontal stripes and are broadly tipped “white”. There may be a thin white line separating the chest from the yellow abdomen.

Female: Head, back and chest are dark grey. Abdomen is a dull yellow belly. Thin black and white wing bars. White eyerings are broken above and below the eye.

They mostly feed on various small fruit, but will also task small animals, insects and their larvae.

Gartered Trogons are monogamous. These cavity nesters raise their chicks in large, active wasp, ant or termite mounts, in the holes of rotten trees or other easily excavated substrates.

It is speculated that nesting in arboreal nests of termites and ants offers them some protection against predators. 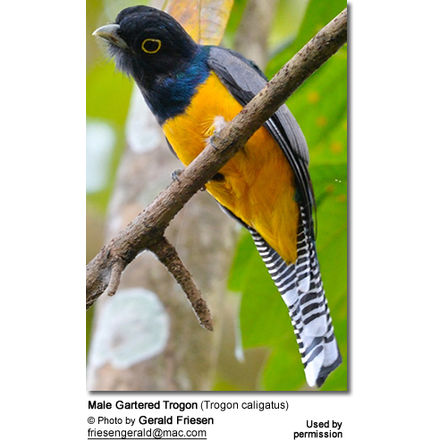