Giant petrels is a genus from the family Procellariidae and consist of two species. They are the largest birds from this family.

Both species are restricted to the Southern Hemisphere, and though their distributions overlap greatly with both species breeding on the Prince Edward Islands, Crozet Islands, Kerguelen Islands, Macquarie Island and South Georgia, many Southern Giant Petrel nest further south, with colonies as far south as Antarctica.

Giant petrels are aggressive predators and scavengers, which has led to the other common name they were known as, the Stinker, and the whalers used to call them gluttons.

Fulmarus, to form a distinct sub-group within Procellariidae, and if you add in the Antarctic Petrel, Cape Petrel, and the Snow Petrel, they form a separate group from the rest of the family.

They superficially resemble the albatross, and are the only procellarids who can equal them in size. They can be separated from the albatrosses by their bill; the two tube nostrils are joined together on the top of the bill, unlike on albatross where they are separated and on the side of the bill.

They are also the only members of the Procellariidae family to have strong enough legs to walk effectively on land. They are also much darker and more mottled brown (except for the white morph Southern, which are whiter than any albatross) and have a more hunch-backed look.

Finally, they have a salt gland that is situated above the nasal passage and helps desalinate their bodies, due to the high amount of ocean water that they imbibe. It excretes a high saline solution from their nose.

They are harder to tell from each other, possessing similar long pale orange bills and uniform mottled grey plumage (except for 15% of Southern Petrels, which are almost completely white). The billtip of halli is reddish-pink and that of giganteus is pale green, appearing slightly darker and lighter than the rest of the bill, respectively. The underside of older halli is paler and more uniform than giganteus, the latter showing a contrast between paler head and neck and darker belly.

Unfortunately young birds of both species are all dark and very hard to distinguish unless bill tip colour can be seen. Some relatively young Northern Giant Petrels can appear to be paler on the head suggesting Southern Giant and thus this species is harder to confirm. 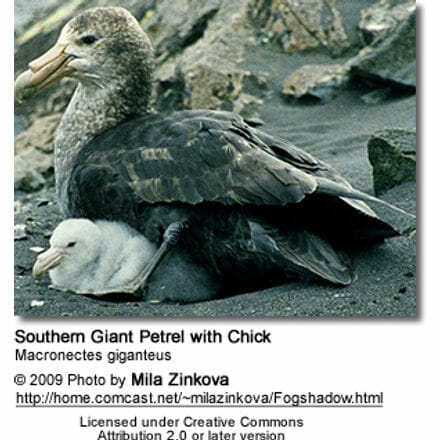 Macronectes comes from the Greek words makros meaning long and nēktēs meaning swimmer. Also Petrel is derived from St. Peter and the story of his walking on water as they appear to run on the water when they take off.

Giant petrels are highly opportunistic feeders, uniquely for procellarids they will feed on land as well as at sea, in fact they find most of their food near the coast. On land they feed on carrion (carcass of a dead animal), particularly that of seals and penguins.

They also display their dominance over carcasses with a “sealmaster posture”: the head and the wings are held outstretched, the head pointing at the opponent and the wingtips pointing slightly back; the tail is raised to a vertical position.

They are also capable of killing other seabirds, even those as large as an albatross, which they kill either by battering them to death (most commonly chicks of other species during the breeding season) or drowning. At sea they feed on krill, squid and fish, often attending fishing fleets in the hope of picking up offal (= entrails and internal organs of butchered animals).

The Southern Giant Petrel is more likely to form loose colonies than the Northern, both species laying a single egg in a rough nest built about 50 cm (20 in) off the ground. The egg is incubated for about 60 days, once hatched the chick is brooded for 3 weeks. Chicks fledge after about 4 months, but do not achieve sexual maturity for another 6–7 years after fledging.

While both species are listed as Near Threatened in the 2008 Red List by the IUCN, recent evidence suggests they are less threatened than previously believed, and the populations of both actually appear to have increased, at least locally. Consequently they will be listed as Least Concern on the 2009 Red List.