The Glossy Ibises (Plegadis falcinellus) are the most widespread of all ibis species.

They breed in warm regions of Europe, Asia, Africa, Australia, and the Atlantic and Caribbean region of the Americas.

The migratory birds found in Europe usually travel south to Africa for the winter, and those occurring in North America from north of the Carolinas winter farther south.

Outside the breeding season, they may disperse widely.

The breeding plumage is reddish-brown bodies with shiny bottle-green wings.

The bill is brownish and the legs red-brown. The dark facial skin is bordered above and below in blue-grey (non-breeding) or cobalt blue (breeding). 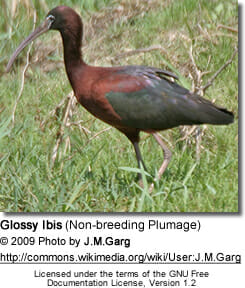 Glossy Ibises typically nest in colonies in marshes, often with other water birds.

The nests are shallow cup-shaped platforms of sticks, grasses or reeds that are typically situated on low trees or bushes near a body of water, such as rivers, swamps or lakes. Although some ibises also make their nest amongst rocks and on cliffs,

They mostly feed in shallow waters or marshy wetlands on small fish, aquatic insects, mollusks, frogs, and food sifted from the water surface.

These ibises are generally quiet, but a variety of croaks and grunts – including a hoarse grrrr made when breeding – can be heard.