Observing Trogons requires much patience and persistence. Trogons belong to the more calm representatives of the bird world and are mainly found in the treetops, where they can sit motionless on a branch for many hours, only leaving for a short time in order to search for food. With their short, rounded wings they can fly strongly, agile and almost soundless over short distances, maneuvering accurately through the dense forests they live in.

Trogons are cavity nesters, and in the wild they dig their own nests in rotting tree trunks and termite mounds, or they use old woodpecker nests and natural cavities in trees. Both sexes participate in the construction of the nest and the incubation of the clutch, which usually consists of two eggs. Both parents care for the chicks, the male to a greater extent.

An interesting member of the Trogonid family is the Golden-headed Quetzal. This species lives in western South America, where it occupies humid highland forest habitats of the Andes in up to 3100 m. It mainly feeds on fruits of wild avocado and fig trees, but it occasionally takes insects and some small reptiles, too. The males of this species are characterized by their bright red belly and yellow bill. The rest of their plumage has an iridescent green color, with a golden cast to the head. Additionally, males carry special, elongated tail feathers. Females can easily be distinguished from males: their plumage is duller and less shimmering, their head and lower chest rather grey.

In March 2012 however, a new male finally moved to our female Golden-headed Quetzal. This male came from Barcelona Zoo, where it was also kept without a partner.

After the arrival and quarantine period, the male was moved to the female in a large, densely planted aviary with a waterfall in our tropical paradise hall. The birds were provided with a nest box made of a round, natural tree trunk that was filled to the edge with wood shavings. These shavings encourage them to dig a tunnel and excavate their own nest, just like they would do in the wild.

From the beginning, the pair got along very well, and our zookeepers of the tropical department could observe both birds performing courtship behavior by the end of April. Shortly afterwards our female laid her first egg, but unfortunately this was found broken after a few days in the nest box, which is observable with the help of a small camera.

At the end of May, the female laid a new egg, and this one was taken out of the nest and replaced by an artificial egg as a precautionary measure. Two days later a second egg was laid. Immediately after egg deposition, both eggs were transferred into an artificial incubator. After a short period of time it became clear that both eggs were sadly unfertilized. In mid-august however, the time had finally come: the first fertilized egg was developing in our incubator!

On September the 4th 2012, after an incubation period of approximately 18 days, Europe’s first Golden-headed Quetzal finally hatched! Because the eggs were artificially incubated, our female had time to start laying eggs again. Two more eggs were laid in the beginning of October, and these were again artificially incubated. Soon it became clear that both eggs were fertilized and on the 21st and 23rd of October two more chicks hatched! This was a great success for us and it made the whole staff very proud. 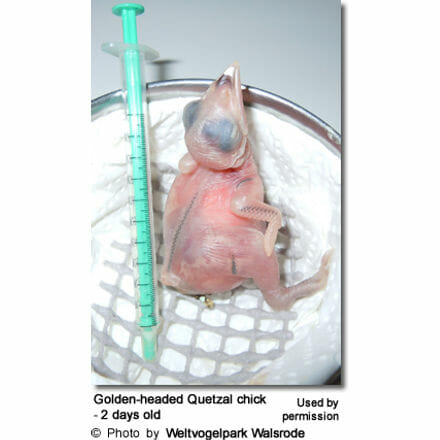 Obviously, the real work only started when the first chick came out of its egg.

The blind and naked chicks didn’t get any food in their first 30 hours of life to allow absorption of the yolk. During this period, a fluid consisting of an electrolyte solution and water was given every 2 hours.

Their first real meal, consisting of the innards of baby mice, white mealworms and bee larvae, was enriched with lactobacilli. A special hand-rearing food powder was used in small quantities too; this was fed as a slurry by mixing it with water. After a few days vitamins were added to the food, and the innards of mice were replaced by small pieces of whole mice. Much attention was paid to the growth of the chicks and the amounts of food were always adjusted accordingly.

The little birds needed almost around the clock attention from our hand-rearing team (consisting of zookeepers, our veterinary and Biologists) and were fed from 6 a.m. to 10 p.m.

On the chicks’ sixth day, our hand-rearing team already started expanding the diet. Soaked pellets, especially developed for fruit eating birds (NutriBird T16 from Versele Laga), as well as papaya and mango pieces, and later on blueberries were added to the menu.

Adjusted to the growth of the chicks, soaked pellets developed for hornbills and larger fruit eaters (NutriBird H16 from Versele Laga) were offered too, which were accepted by the birds very well.

As expected with this species, the hand-reared chicks turned out to be very calm and only some soft begging sounds were perceived.

In nature, during their first 10 days, chicks are mainly fed with insects and more and more with fruits as the chicks grow up.

Parents might bring back very big pieces of food while raising their offspring but luckily chicks have very large and flexible throats, which enables them to swallow the fruit of a wild avocado tree in one piece. 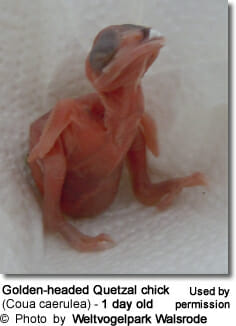 Corresponding to their growth, the chicks’ weight increased strongly during their first days. Weighing only 13 g when hatching, they already weighed 25 g by day 4. By day 10, they doubled this with a weight of 50 g, and by day 12 the balance showed no less than 78 g!

Shortly after hatching, the birds were put into an artificial nest made out of a stainless steel bowl. These bowls were lined with paper towels for support, and an anti-slip mat was put in that so they could grab it with their feet. In the beginning, the chicks were kept in an incubator at 37.2 °C. Every day the temperature was adjusted and decreased, taking the wellbeing and growth of the small birds into account.

From day 22, the chicks were placed in their nests in an open brooder with a dark emitter as heat source, at a temperature of around 25 °C and 50% relative humidity.

At first they only stayed in this brooder for short periods of time to get used to the new surrounding, but from day 26 they stayed there throughout the day, placing them only back into the incubator at night. While in the brooder, the birds mostly sat on the edge of the nest, or left the nest completely to sit on one of the perches in the brooder.

From day 34 onwards the juveniles stayed in the open brooder day and night. Golden-headed Quetzals need a sufficiently high humidity and the possibility to bathe. Therefore, the birds were regularly showered using a spraying bottle with lukewarm water, which they obviously enjoyed.

When the birds were almost 60 days old they were brought to a big aviary. The chicks from October, which had been housed together until then, were separated at this point. Initially, the food was still held in front of the bill to point them in the right direction, but a short time later the birds could be observed to take food from the food plate on their own.

After 80 days the young Golden-headed Quetzals were completely independent.

The food of our raised young consists now of small pieces of papaya, mango, blueberry, melon, wine grapes and occasionally pear. Additionally, the birds get soaked T16 and H16 pellets from Versele Laga, which they like very much.

Currently, three grown-up Golden-headed Quetzals are sitting in their aviaries, and the success of last year is continued in 2013: at the end of January a fourth chick, at the end of February the fifth chick of this species hatched in Weltvogelpark Walsrode, both being  raised by our dedicated hand-rearing team again. We look very much forward to further breeding with this extraordinary species!