The Golden-headed Quetzals (Pharomachrus auriceps) – also known as Golden-headed Trogons or Yellow-bellied Quetzals – occur naturally in South America. Their common names were derived from the bronzy tint to the head feathers and yellow abdomens.

They share part of their natural range with the Crested Quetzals (Pharomachrus antisianus), and it is not unusual to find both species at the same sites.

Outside the breeding season, they tend to be solitary. When breeding, they are usually found in pairs or small family groups.

The range of the Golden-headed Quetzals stretches from the Darién province of Panama (Central America) through Colombia and Venezuela south to Northern Bolivia. They are uncommon to locally fairly common.

They live in humid, hilly, wooded areas ranging from 3,300 – 10,800 feet (~ 1,000 – 3,300 m) elevation, although may migrate to lower elevations during the wet season, between May and October. They favor areas with dense vegetation, and typically remain high in the canopy, where they remain well hidden. 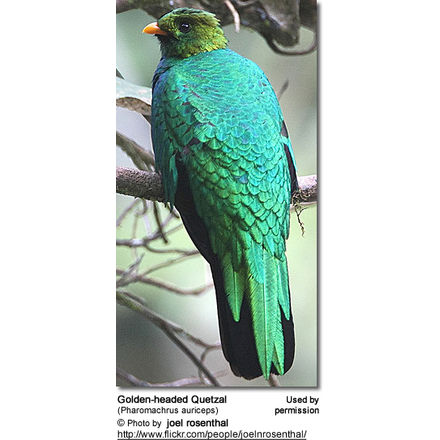 Found on the Cerro Pirre mountain in Darién, Panama, south through the Andes from Colombia to eastern Peru and northern Bolivia.

[(Pharomachrus auriceps heliactin – Cabanis and Heine, Sr., 1862]) – usually considered invalid; most authorities combine them with the nominate form above

The male plumage is mostly glossy green with a golden sheen to the head and throat. The chest and abdomen are bright red. The wings are black. The upper tail is dark green; the under tail feathers are blackish, occasionally with white tips. Their remiges (large flight feathers) are darker metallic green.

The legs and feet are dark olive green or brownish legs and feet. They have heterodactyl feet (the first and second toes face backwards and the third and fourth toes face forward).

Males are larger in size than females, with longer tail feathers. The female plumage is duller with a greyer or duller golden-brown colored head ; and females have darker / brown bills.

Immature birds have a dark brown or blackish plumage with a few glossy green feathers emerging as they mature. They also lack the ornamental wing and tail coverts (feathers) of the adults.

Males can be distinguished from other quetzal species by their lack of crest feathers on the head.

Their diet largely consists of various pulpy fruits and berries, with emphasis on avocadoes and the fruit of the laurel. They will swallow this fruit whole and regurgitate the pits later. They also eat insects (such as smooth-skinned caterpillars, wasps, ants, beetles and locusts), and the occasional small lizards and frogs. Captive birds have been reported to eat baby mice, mealworms and dog chow.

Golden-headed Quetzals reach reproductive maturity when they are about 2 years old. These birds are seasonally monogamous. On the onset of the breeding season, males attract females by singing for them. They breed once a year, usually from February to June.

They nest in cavities of rotten tree trunks that they either excavated themselves with their beaks or they may use existing hollow spots that they generally modify to suit their purposes.

The female lays 1 – 2 blue eggs into the unlined nest. Both parents share the incubation of the eggs for about 18 – 20 days to hatching. The male generally incubates the eggs during the day while the female incubates them at night.

The brooding male’s long plumes don’t fit into the nest and these elongated tail feathers are usually folded forwards over the back and out of the hole, when it his turn to sit on the eggs.

The chicks are being protected and fed by both parents. The young fledge (leave the nest) when they are about 21 – 30 days old.

Golden-headed Quetzals are generally quiet, except for “giggling” vocalizations or horse-like whinnies. Their calls are described as hawk-like whistle which sounds like “we-wheeoo, we-wheeoo“.